President Moon Jae-in on Dec. 18 said peace on the Korean Peninsula will create new business challenges and more opportunities for both Korean and Swedish corporations.

At the Korea-Sweden Business Summit held at Lotte Signiel Seoul with Swedish Prime Minister Stefan Lofven attending, the president said, “Peace on the Korean Peninsula will connect continental and oceanic networks. When inter-Korean roads and railroads are connected, this will pave land routes that pass through the Eurasian continent and extend to Scandinavia.”

“The Northern Sea Route will open up with the Korean Peninsula as a base, allowing eco-friendly ships to sail between the Pacific and the Arctic oceans.”

President Moon also urged business leaders in Korea and Sweden to cooperate for the development of peace and a free trade system on the peninsula and in Northeast Asia.

He announced plans to extend bilateral cooperation in future industries and sustainable development, mentioning the signing in June by both countries of memorandums of understanding on cooperation in industrial resources, small businesses and innovation.

President Moon said the Korea Startup Center, to be set up in Stockholm next year, will “serve as a venue for exchanges between startups from both countries” and pledged his government’s active support for it.

He also mentioned bilateral cooperation for an eco-friendly economy and sustainable development such as efforts to minimize greenhouse gas emissions and advance the development of renewable energy sources.

“A policy paradigm shift to respond to climate change will go beyond Korea and the European Union and spread to other economic regions, providing more opportunities for Korean and Swedish businesses,” he said. 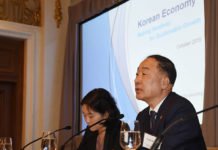 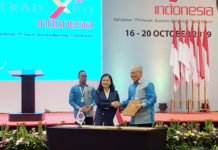