An exhibit that shows the similarities and differences between Korean and Japanese cuisine is currently being held in Seoul.

The National Folk Museum of Korea, in collaboration with the National Museum of Ethnology in Japan, is curating an exhibition entitled Dining Table Friendship to commemorate 50 years of diplomatic relations between Seoul and Tokyo. The exhibit, which opened Dec. 9, will run until Feb. 29 next year.

The exhibit explores the exchange of eating habits between Korea and Japan over the past century. Visitors can expect to see over 250 items on display that shed light on 100 years of cultural exchange.

The items on display show the process by which different foods were introduced and localized in the other country. Instant noodles, artificial seasoning and electric rice cookers from various eras underscore society’s changing tastes. Interviews with people that grew up during such changes, as well as movie stills, advertisements and photographs, help to bring the past century to life.

The seven sections of the exhibit fall under the following themes.

Part 1: “Exchange of Western, Japanese and Korean cuisine”
After Korea opened its ports to trade, various Japanese-style Western foods started to filter into Korean society. Pictures of dishes such as tonkatsu, or breaded cutlets, Japanese-style curry, oden, a fishcake soup, and tempura will be shown.

Part 3: “The rise of ramen and other flour-based foods”
Korean instant noodles, a dish developed as a means to solve rice shortages in the 1960s, are shown through pictures and advertisements.

Part 4: “Integration of Japanese-style Western food into Korean society”
Through media footage from the 1980s, the transformation of Japanese donkatsu into the Korean-style breaded pork cutlets is shown.

Part 5: “Changes in the kitchen”
The introduction of modern kitchens and electric rice cookers in the ’70s and ’80s brought about changes in cooking methodologies. A household ledger from the era will be on display.

Part 6: “Localization of oden and yakiniku”
As Korean bulgogi, grilled marinated beef, became localized in Japan, and as yakiniku, grilled meat, and Japanese oden, a fishcake soup, gained popularity in Korea, different condiments and sauces entered the market. These products will be on display.

Part7: “Kimchi soup and ramen cross cultural boundaries”
In this last section, we observe the changes in food consumption as Korean and Japanese foods integrate themselves into their new countries. Food products sold in both markets are shown through pictures.

Finally, every Sunday at 3 p.m. during the month of December, museum-goers will also be able to try a variety of fusion dishes prepared by chef Yoo Jong Ha. The comic book ‘Le Grand Chef’ by cartoonist Huh Young-man, in both Korean and Japanese, will be on display at the exhibit.

Korean and Japanese electric rice cookers from the ’70s and ’80s (left) and a variety of seasonings from the two countries (right) are on display at the museum. 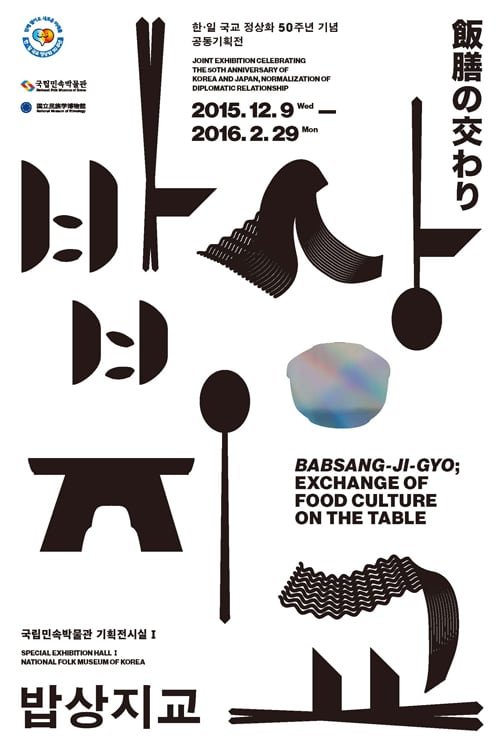 The Dining Table Friendship exhibit will be at the National Folk Museum of Korea until Feb. 29 next year.