The 2016 Arirang Festival opens on Oct. 8 at the National Museum of Korea with an outdoor concert featuring many variations of the song ‘Arirang’ and accompanied by the Gyeonggi Philharmonic Orchestra.

The Korean folk song “Arirang,” in genres both old and new, echoed across Seoul’s crisp autumn skies this past weekend.

The 2016 Arirang Festival opened at the National Museum of Korea on Oct. 8 and 9, with the theme “My ‘Arirang,’ Our Song,” and featuring a program filled with traditional Korean singing, classical piano pieces, dance and opera. 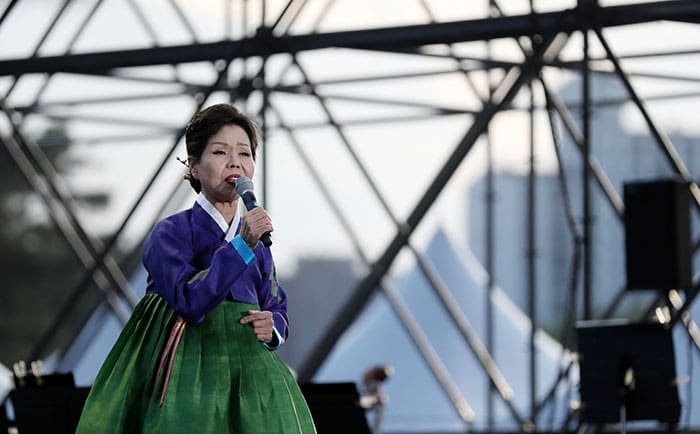 Lee Chun-hee, a master singer of traditional folk songs, sings ‘Bonjo Arirang’ (본조 아리랑), a version of ‘Arirang’ from Gyeonggi-do Province, at the National Museum of Korea on Oct. 8.

The concert showcased several variations of “Arirang,” accompanied by the Gyeonggi Philharmonic Orchestra. Audiences had a chance to hear “Miryang Arirang” (밀양 아리랑) from the Miryang region of Gyeongsangnam-do Province, as well as “Jindo Arirang ” (진도 아리랑) and “Sangju Arirang” (상주 아리랑). 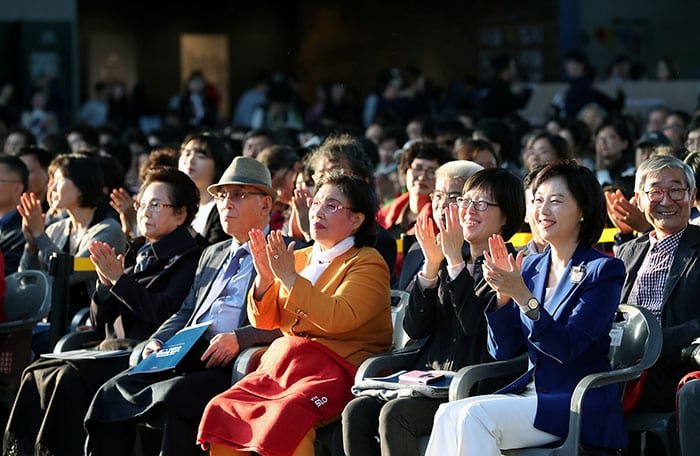 Minister of Culture, Sports and Tourism Cho Yoonsun (right) enjoys a performance of ‘Arirang’ at the 2016 Arirang Festival at the National Museum of Korea on Oct. 8.

Later in the evening, modern dancer Seong Chang Yong staged a dance choreographed to “Arirang,” while soprano Jung Hye-ok filled the outdoor amphitheater with her powerful vocals in a performance “Arariyo” (아라리요).