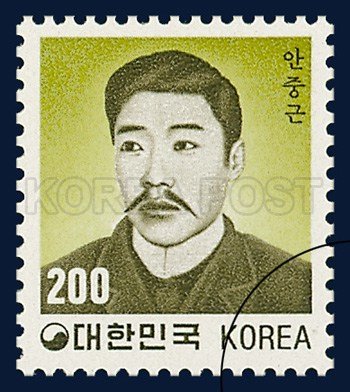 A stamp is dedicated to independence activist Ahn Jung-geun.

“If I fail once, I try again. If I fail again, I will try for a third time, fourth time and tenth time. Even if I am defeated the one hundredth time, I will not give in. I must certainly have determination to regain Korea’s independence,” said Ahn Jung-geun in his autobiography, which he wrote while in prison.

Ahn Jung-geun (1879-1910) was born in Hwanghae-do Province and became an independence activist during late Joseon times (1392-1910). In 1895, he converted to Catholicism, following in his father’s footsteps, and began to learn about the West. Ever since he was young, he concentrated all his strength on educating other people and actually set up schools as he wanted to enlighten the general public and to regain national sovereignty. After Japan coerced Korea to sign a treaty in 1905 that made Korea into a protectorate, he joined the military resistance against Japan that had been established in the Russian Far East.

In March 1909, Ahn cut off his left ring finger along with eleven other independence activists. In blood, they wrote “Korean independence” (대한독립, 大韓獨立) on a Taegeukgi, the national flag, pledging that they would devote themselves to their country’s independence. In October the same year, he learned that Ito Hirobumi (1841-1909), the first prime minister of Japan and at the time the resident-general of Korea, the official in charge of Korean colonization, was coming to Harbin in northeastern China. It was then that he planned his assassination. Ahn shot Ito as the Japanese official entered Harbin Station on October 26, 1909, and three of his bullets hit his target.

While imprisoned, Ahn did not lose his dignity. His trial was held in Lüshun, China, near Dalian, and he was executed on March 26, 1910. 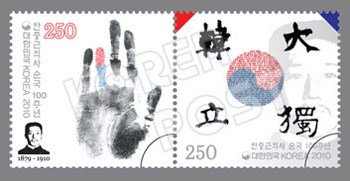 A stamp issued on the 100th anniversary of Ahn Jung-geun’s death contains images of his handprint and of his writing in blood pledging to fight for Korean independence.