Wishing not to have
So much as a speck of shame
Toward heaven until the day I die,
I suffered, even when the wind stirred the leaves.
With my heart singing to the stars,
I shall love all things that are dying.
And I must walk the road
That has been given to me.

Tonight, again, the stars are
Brushed by the wind.

“Foreword” is a poem written on Nov. 20, 1941, by late poet Yun Dong-ju (1917-1945). It is contained his anthology “Heaven, Wind, Stars and Poems,” published in 1948. The poem embodies the overall theme of the book of poetry, as his short life came to a tragic end during Japanese colonization (1910-1945). The poem translates ontological agony into transparent lyricism, warmly comforting and deeply moving people who live in a time of chaos. 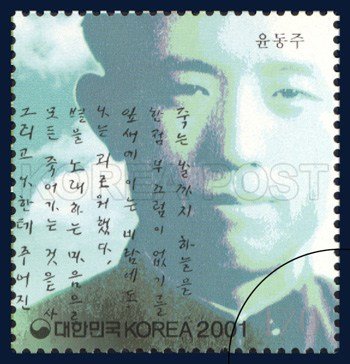 A stamp issued in 2001 to commemorate Yun Dong-ju features his most famous poem, ‘Foreword.’

Yoon was a young man who spoke for the independence of his fatherland with poetic language.

Yoon and his classmates published a magazine while attending elementary school, showing his literature talent from a young age. He later attended Soongsil School in Pyongyang, but he left school as the Japanese colonial government tried to force students to worship at Shinto shrines, an incident that brought him to the attention of the Japanese colonial police. Yun wrote many poems, including “Foreword,” and left Korea to study in Japan in 1943 after attending Yonhi College, the modern-day Yonsei University.

He was later arrested by the Japanese police for allegedly participating in an independence movement while in school. He was given a two-year prison sentence and served his term in a jail in Fukuoka. His health deteriorated while in jail and he passed away in February 1945. He was only 27 years old. His remains were buried in Longjing, Jilin Province, northeast China, which is his birthplace.

A memorial Mass to pay tribute to Yun is still held yearly at Rikkyo University in Tokyo, which he attended for eight months. Over 400 people celebrated Mass at the Rikkyo University church on March 22 this year to mark the 70th anniversary of Yun’s death. The message of peace conveyed in his life and poems resonated across the church. Even 70 years after his death, Yun, who died young at 27-years-old, still lives on in many people’s hearts.