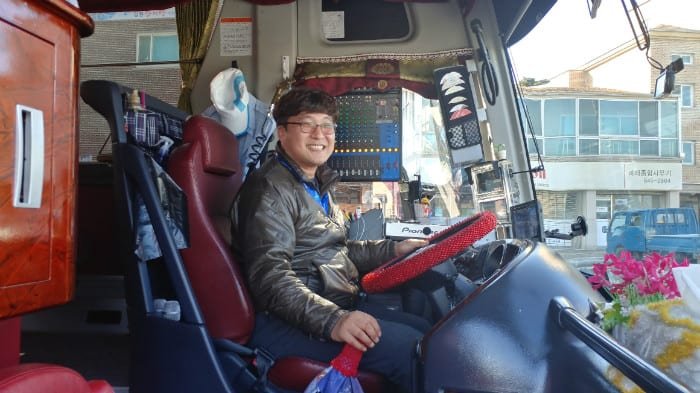 Song Hyeon-jun drives the free shuttle bus No. TS22 that runs between Gangneung Station and the Olympic Park during the PyeongChang Winter Games, in Gangneung on Feb. 21. Song says that the warm words from the passengers meant everything to him.

Behind the successful Olympic, as said so by foreign press, are those people who have been working hard unnoticed but close to the limelight.

There was a long line of people waiting for the bus at the bus stop in front of the Olympic Park in Gangneung, Gangwon-do Province, on Feb. 21, where some of the skating events were taking place.

Song Hyeon-jun, who drives the No. TS22 shuttle that runs between Gangneung Station and the Olympic Park in Gangneung, came to the area all the way from Mokpo, Jeollanam-do Province, after learning that the Winter Olympics were seeking bus drivers that could work during the Games. The bus driver, who has been caring about even the smallest of details concerning safety, smiled and said that, “I feel proud when non-Korean passengers say ‘Thank you’ in Korean to me.”

He added that he didn’t have a lot of time to rest because of the number of passengers using the shuttle bus, but that he would do his best until the end of the Winter Olympics. Baek Yong-geun, who was willing to open the second floor of his workshop as a free rest area for Olympic visitors, cleans up before welcoming more people on Feb. 24.

On Feb. 24, one day before the end of the PyeongChang Games, a banner that read “Anyone is welcome to rest hear. Free Lounge.” hung from the second floor window of an advertisement company right next to Gate No. 3 of the Pyeongchang Olympic Plaza.

Beak Yong-geun, who runs the company, opened up his whole second floor for visitors for free. Tables, chairs and a water purifier were set up, and the instant coffee was free, too.

The owner readily offered his space to the workers, volunteers and visitors at the Olympic Games, at the expense of a not inconsiderable potential rent. He was busy cleaning the place, even while giving an interview, saying humbly that, “This is nothing. I just wanted to contribute to the success of the Olympics as a local here.” 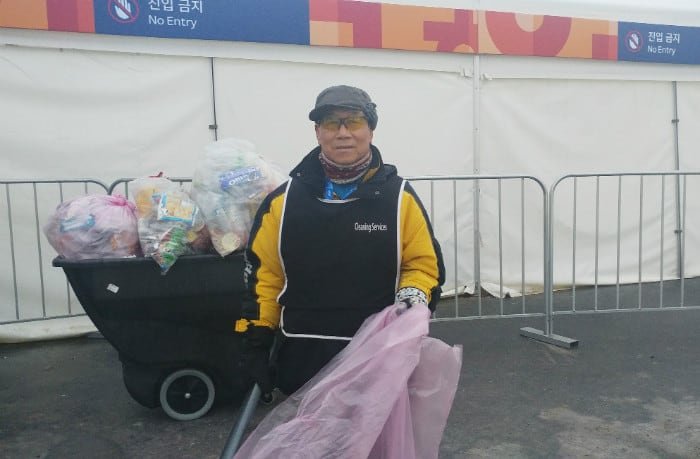 Jeong Jun-seob, part of the maintenance crew at the Pyeongchang Olympic Plaza, says,’I’m happy to meet and talk to non-Korean visitors and, also, to be a help at the Winter Games,’ on Feb. 24.

Some busy people, wearing a reflective vest that says ‘Cleaning Services’ on it, were seen at the Olympic Plaza in Pyeongchang late in the afternoon on Feb. 24. They were picking up garbage with tongs and plastic bags and emptying trash cans that were set around the plaza.

Jeong Jun-seob, part of the maintenance crew, works the eight-hour shift between 4 p.m. and midnight. He said, “I’m glad that I’m old, but can still be of help, albeit only a bit, to this world festival that’s taking place in my hometown.” 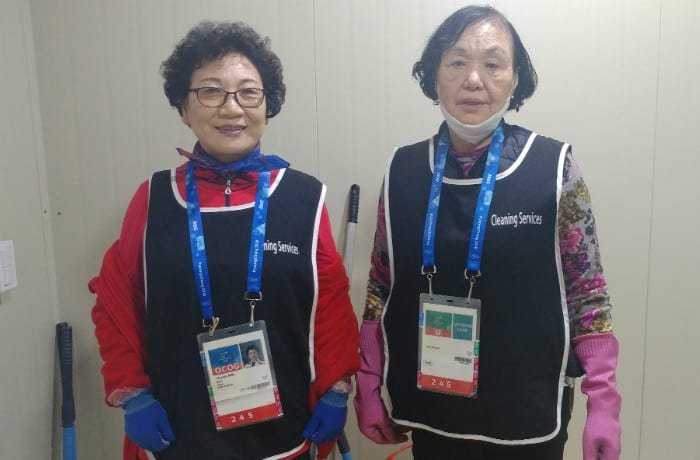 Kim Chun-ja (left) and Jo A-ran, part of the maintenance crew at the Visitors Center at the Olympic Plaza in Pyeongchang, say that, ’It’s hard, but we’re happy when people say they are thankful,” on Feb. 24.

Kim Chun-ja is part of the team that maintains the Visitors Center at the Olympic Plaza in Pyeongchang. She said that, “The amount of trash is huge, as we have many visitors. I work hard because I want to give a good impression about Korea to our guests here.”

Kim’s coworker, Jo A-ran, said with a smile that, “I wish I could speak English to talk to people from abroad. Still, I can’t be happier when they pat me on the shoulder and encourage me to do better.”

Those people all hoped for the best concerning the Olympics, and were working hard for the success of the Winter Games. Nonetheless, they still maintained a humble attitude even in light of their efforts. Their endeavors, combined one-by-one, all added to the success of Korea’s Winter Olympic Games.