President Moon Jae-in stresses the meaning of Korea’s Candlelight Revolution, as well as the policy priorities and diplomatic direction of his new government, in his keynote speech to the 72nd U.N. General Assembly at U.N. headquarters in New York on Sept. 21. He also introduces the peace-oriented inter-Korean policy goals of the Korean government.

President Moon Jae-in highlighted the meaning of Korea’s Candlelight Revolution and the policy goals and diplomatic policies of his the new government in his keynote address to the 72nd U.N. General Assembly at U.N. headquarters in New York on Sept. 21,

He told the world leaders gathered there about the principles and direction of Seoul’s inter-Korean policies, which have always put an emphasis on a framework for peace.

“The Candlelight Revolution of the Republic of Korea is a scene of history in which the U.N. spirit made a brilliant achievement,” said President Moon.

“Backed by candlelight power, Korea would like to play a leading role in helping the international community solve global issues that it faces,” he said.

“I particularly would like to consider the theme of this year’s U.N. General Assembly, ‘Focusing on People.’ It is very meaningful, as it is identical to the administrative policies of the new Korean government,” he said.

“The people lie at the heart of all the policies of our new Korean government.”

“Peace is the calling of life, and a historic responsibility for a president of one of the world’s only divided countries that has undergone a war,” said President Moon.

“I represent the Korean people who sent a message of peace to the globe through the Candlelight Revolution where war and conflict continue to take place,” he said,

“I also have a responsibility to protect the rights of the people so that they can enjoy a safe and secure daily life, as one of the universal values of all human beings,” said the president.

“For this reason, I hope that North Korea can choose a path for itself toward peace,” said President Moon.

“I believe peace can be made whole and become sustainable only when one chooses it for itself,” he added.

President Moon said, “I would like to reiterate here in the U.N. General Assembly, where countries gather to work together for world peace and for the co-prosperity of humankind, that Seoul does not hope for a regime collapse in Pyongyang. We will not pursue any form of absorption or unification, nor other artificial forms of unification.”

“Even now, if the North decides to stand on the right side of history, we are prepared to help them alongside the international community,” said the president. 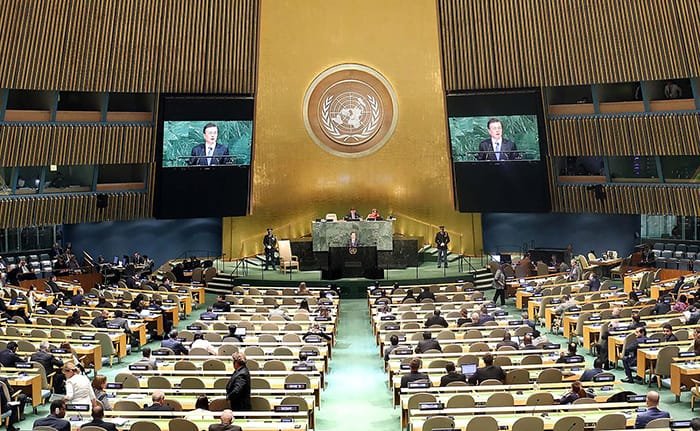 President Moon then introduced the PyeongChang 2018 Olympic and Paralympic Winter Games, describing them as a turning point to help transform the world and turn it down a path toward peace.

“The PyeongChang 2018 Olympic and Paralympic Winter Games will be the gateway to opening the Olympic Games relay across Northeast Asia, followed by the Tokyo 2020 Olympics and the Beijing 2022 Winter Olympics.”

“I strongly hope that this Olympic Games relay can offer an opportunity to boost peace and economic cooperation across Northeast Asia, starting next year where the Cold War and the future exist together with conflict and cooperation.”

“My heart is warmed with joy when I imagine North Korean athletes entering the stadium during the Opening Ceremony, a South-North joint cheering squad enthusiastically welcoming them alongside the brightly smiling faces of people from all around the globe,” said the president.

“Like the candlelight held aloft by the Korean people despite a crisis in democracy, I believe the PyeongChang Olympics can become a candlelight to shine the light of peace,” he said.

“With you and the U.N., we can become such candlelight,” said the president, inviting the world leaders to the PyeongChang 2018 Winter Games.