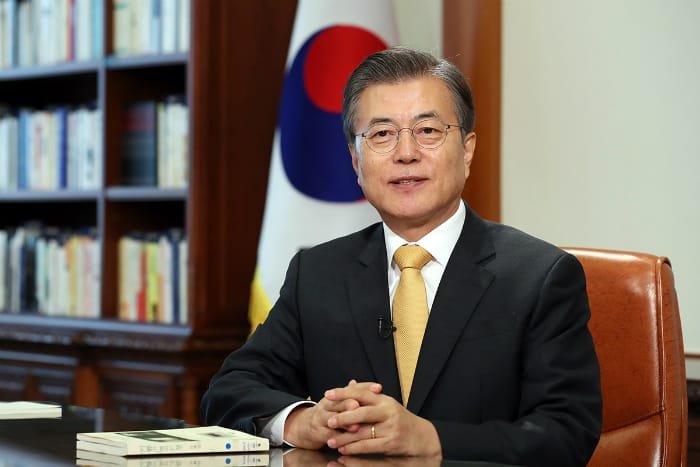 President Moon Jae-in shares his thoughts on the legacy of the Hangeul alphabet on his personal Facebook profile in celebration of Hangeul Day, Oct. 9, saying that, ‘Hangeul’s greatness shines brighter in the age of social media.’ (Cheong Wa Dae)

“Hangeul’s greatest quality is that – at its core – there lies the wish to serve the people,” wrote President Moon Jae-in on his Facebook profile in a message to celebrate this year’s Hangeul Day on Oct. 9.

The president continued, saying that, “Not only is Hangeul easy to learn, it allows us to phonetically write out in letters all the sounds we hear. It aids our communication.”

“King Sejong the Great created our writing system so that each and every citizen could learn to read and write, express themselves freely, and communicate with others. I believe this wish isn’t so different from the spirit of democracy,” he said. 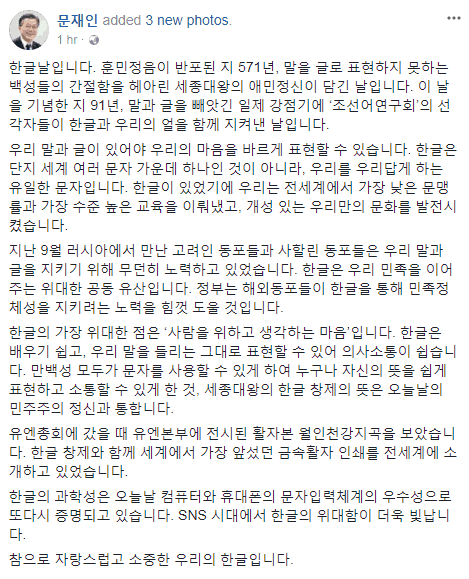 “Hangeul is not just one type of letter system among other alphabets found around the world. In fact, it’s a unique letter system that makes us who we are. It’s thanks to Hangeul that Korea now has some of the lowest illiteracy rates and boasts one of the highest levels of education in the world. Hangeul has given us our identity, and our very own culture,” he said.

“When I met with ethnic Korean-Russians this past September in Vladivostok, I was moved by how much work these communities put into keeping the Korean language alive, in both verbal and written forms. Hangeul is the great, shared legacy that connects all of our people,” he stressed.

The president also mentioned his trip to New York for the U.N. General Assembly last month. He said, “While at the U.N. headquarters, I was able to see an exhibit of a printed copy of the Worincheongangjigok text. Alongside an exhibit on the creation of Hangeul, the book was on display as a leading example of metal type print.”

The Worincheongangjigok text (월인천강지곡, 月印千江之曲) is a Korean translation of a biography of Buddha written by Prince Suyang, later King Sejo (세조, 世祖) (1417-1468), the second son of King Sejong the Great. He compiled it at the order of his father.

Finally, the president wrote, “Even in the age of computers and smartphones, Hangeul has stood the test of time with its logical principles. Hangeul’s greatness shines brighter in the age of social media.”

“I’m so proud of our precious Hangeul,” he concluded.