Home Magazine Policies Investment in Green New Deal to reach 3.8% of GDP by 2025 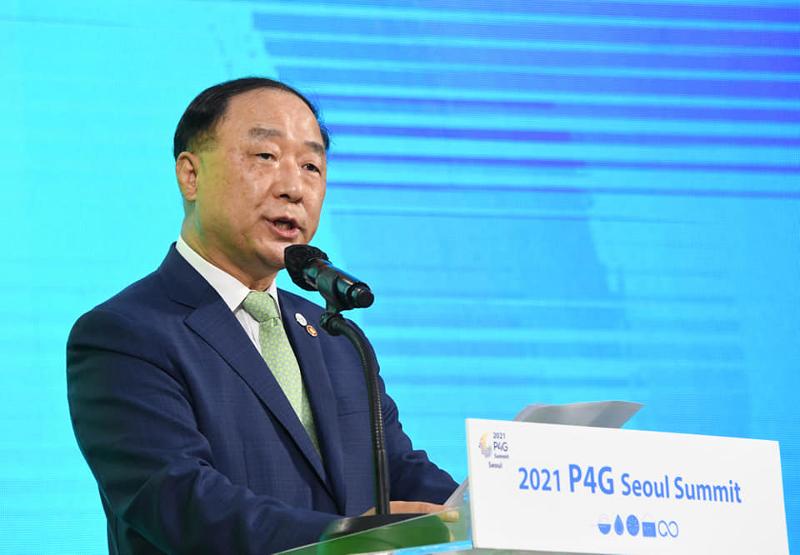 Deputy Prime Minister and Minister of Economy and Finance Hong Nam-ki on May 25 said, “As for the concrete means, we plan to invest 3.8% of our GDP by 2025 in Green New Deal projects, including green infrastructure, renewable energy, and green mobility.”

He was giving the opening speech at Seoul’s Dongdaemun Design Plaza in a special session of the Partnering for Green Growth and the Global Goals 2030 (P4G) Seoul Summit.

“Countries around the world are recognizing that carbon neutrality is not just the means to prevent a climate crisis, but also a new engine for future growth,” he said.

“Korea is accelerating the structural change to a low carbon economy, based on the Green New Deal initiative and the National Strategy for 2050 Carbon Neutrality announced last year.”

“Korea is also working for this goal (2050 net-zero goal), despite its dependency on high-carbon manufacturing industries. With a clear vision for 2050 net-zero, we are preparing a scenario to update the 2030 NDC (Nationally Determined Contributions), based on nation-wide efforts.

“At the same time, we made sure our initiatives reflect the country context by utilizing our strengths in the IT sector to make our manufacturing industry smart and green.”

“The Korean government is currently working to establish a 4-billion dollar fund to encourage large-scale private investments on the implementation of the Green New Deal.”

“Next year, a new Climate Response Fund will also be set up to help reduce greenhouse gas (GHG) emissions, and develop forward-looking technologies for carbon-neutrality.”

“Based on the National Strategy for 2050 Carbon Neutrality announced last December, the Korean government is ensuring a fair transition of industries and workers in the phasing-out process, by supporting their adaptation to new promising industries and reemployment opportunities.”