During the meeting, Korea and Iran agreed to maintain the existing Korean won-based transaction system in order to extend trade and investment. The two countries agreed to provide financial support, cooperation on a double taxation avoidance system and help with customs, finance and insurance. Starting this year, Korea will resume its Economic Development Cooperation Fund and develop more projects eligible for its support.

Korea and Iran will produce steel, automobiles and IT through joint corporations, and host a “Korea-Iran Trade and Investment Conference” every year. Both countries also agreed to support the approval and finance of a joint steel mill between POSCO and Iranian steelmaker PKP (Pars Kohan Diarparsian Steel). They also agreed to set up a dialogue channel in order to solve any difficulties that may occur in the future. Representatives from the Korean and Iranian governments hold a meeting in Teheran on Feb. 29 where they discussed economic cooperation and cooperation in the oil and gas sectors. Korea and Iran are now set to bolster their bilateral cooperation. About 400 people, including business people and government representatives from both countries, attended the Korea-Iran business forum that took place in Teheran on Feb. 29. POSCO and PKP signed a memorandum of agreement covering the construction of a steel mill in Iran.

Korea and Iran will further extend cooperation on construction, marine transport, ports, agriculture and food. In the health and medical sectors, both countries will build hospitals in Iran, and cooperate on setting up a healthcare insurance system in Iran. Regarding sciences, technology and e-government, Korea and Iran will resume the Korea-Iran ICT Cooperation Committee meetings and work to cooperate on the arts, e-government and broadcasting.

Minister of Trade, Industry and Energy Joo Hyung-hwan, who led the Korean delegation, said, “Korea and Iran should become partners for advanced industrialization, going beyond just being trade partners.” He proceeded to propose joint investment and joint research and development (R&D) in petrochemicals, steel and automobiles.

A few days earlier, Korea also sought measures to enhance cooperation with Hungary. The Korean and Hungarian governments discussed measures to extend cooperation on trade, investment, SMEs, the defense sector and infrastructure during the second session of the Korean-Hungarian Joint Commission on Economic Cooperation in Seoul on Feb. 25.

The Korean and Hungarian governments discussed exports of Korea’s helicopters to Hungary, Korean firms’ participation in construction projects in Hungary, and exports of Korea’s “e-trade” system. Both countries decided to bolster cooperation on SMEs and in the healthcare and medical sectors. They also agreed to sign an MOU between government organizations in charge of SMEs in order to exchange SME-support policies and to share market information, and to set up a cooperation system so that they can extend trade and investment among SMEs of both countries. 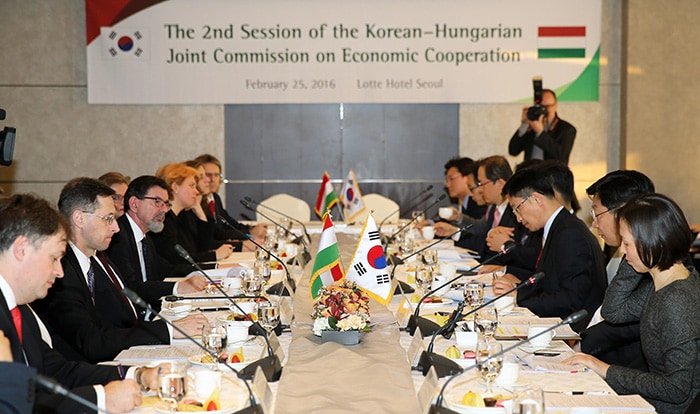 Minister Joo highly valued the successful results of their bilateral economic cooperation, while mentioning the volume of bilateral trade, which has jumped 40 times since 1989 when the two countries forged their diplomatic relationship. Joo proposed that both countries combine their strengths, mentioning Korea’s technological prowess and its global firms in the automobile and IT sectors, and the excellent human resources, basic sciences and geographical strengths of Hungary. He also proposed to set up an R&D structure by combining such strengths, and to use Korean firms in construction and infrastructure.