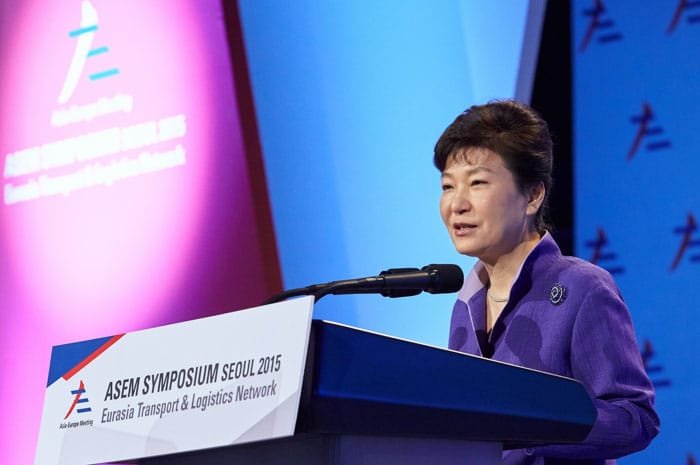 President Park Geun-hye speaks during the ASEM Symposium Seoul 2015 on Sept. 10 in Seoul.

President Park Geun-hye emphasized the importance of the potential for all of Eurasia on Sept. 10, saying, “In order to realize the infinite potential of Eurasia, it is important to properly connect transport and logistics networks across Eurasia.”

Speaking at the ASEM Symposium Seoul 2015, President Park said, “The Eurasian region accounts for 75 percent of the world’s total population and 60 percent of the world’s GDP. This region has infinite potential that has led the communication and progress of humankind’s civilization. In order to revive the connectivity of the region as ‘one continent’ and realize its infinite potential, it is important to connect transport and logistics networks.”

In this regard, President Park proposed to, “bolster mutual cooperation on network strategies across the Eurasian region.”

“Building networks in Eurasia can only come true when countries in the region share their visions and plans, such as China’s ‘One Belt, One Route,’ Russia’s ‘New Eastern Policy’ and the ‘New Silk Road Initiative’ of the U.S., and systemically carry out infrastructure projects to back up the plans. Korea will actively participate in and support various infrastructure projects being conducted by these countries,” said the president.

The president emphasized the need to overcome systemic barriers in the transport and logistics sectors, saying, “It is highly important to standardize and simplify the management of customs, quarantines, immigration processes and the reshipment and transfer system, in order to secure punctuality and safety.” She also proposed to fine tune systems and practices in countries that are different from each other and decisively reform unnecessary practices. 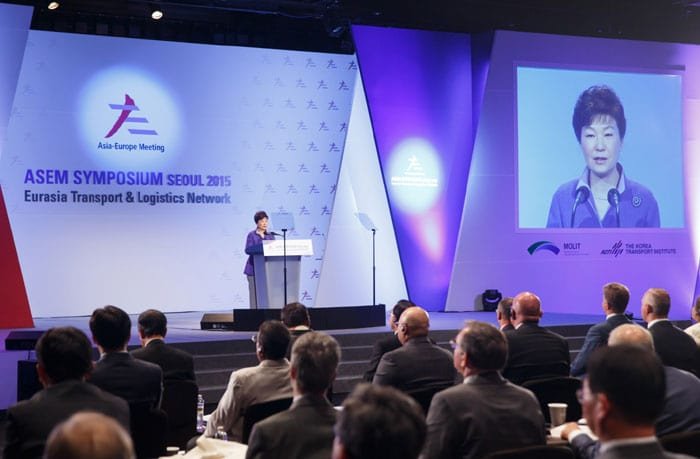 Park Geun-hye emphasizes mutual cooperation in order to make Eurasia into one continent, at the ASEM Symposium Seoul 2015 on Sept. 10 in Seoul.

“Korea will actively share its high-end information and communications technology (ICT) with Eurasian countries in the process of technological development,” she added.

“Success in building transport and logistics networks across Eurasia lies in the firm cooperation among countries,” said President Park. In this regard, she proposed to organize groups of experts in order to carry out joint research into building such a Eurasian network, and to host the first meeting in the first half of next year in Korea. President Park Geun-hye (center, front row) poses for a group photo with participants in the ASEM Symposium Seoul 2015 on Sept. 10.

“Korea has been making efforts to overcome the border that hampers the opening of an era of Eurasia in order to connect the Korean Peninsula and the Eurasian super-continent. Such efforts will greatly help expand exchanges of both material resources and people-to-people exchanges, and bring peace to the Korean Peninsula, to Northeast Asia and across Eurasia,” said President Park, mentioning Korea’s ongoing projects such as the Eurasia Friendship Express and the railroad restoration plan of the Gyeongwon Line.