The Ministry of National Defense announced on Aug. 20 that North Korea provocatively shot two artillery projectiles south of the Military Demarcation Line (MDL) at 3:53 p.m. and again at 4:12 p.m. that day.

The ministry said in a statement during an evening briefing that, “the South Korean military fired dozens of rounds of 155mm shells toward the believed area from where the shells were launched as a warning.”

The representative added that, “The South Korean military has raised its vigilance to the highest level and has been closely watching the movement of the North Korean military, ready to respond strongly and decisively to any further provocations from the North.”

Before the statement, North Korea threatened the South in a message sent from its Central Military Commission at around 5 p.m. and through a radio broadcast to military units in the Yellow Sea. In the message, the North said that it would, “Take strong military action unless the South stops border propaganda broadcasts and dismantles broadcast facilities within 48 hours from 5 p.m. today.” 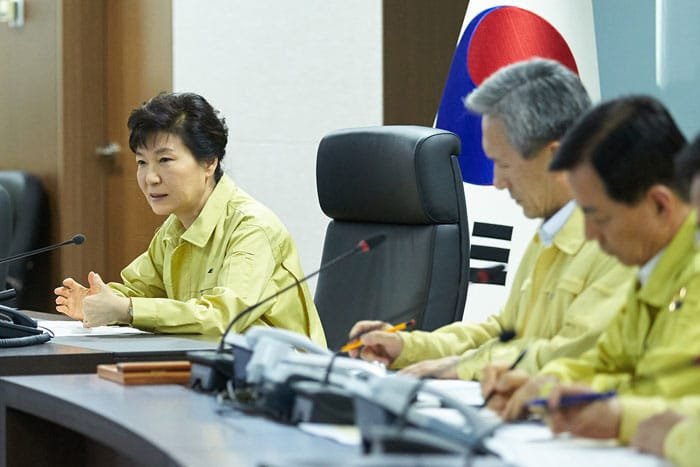 President Park Geun-hye (left) convenes an emergency meeting of the NSC in regard to North Korea’s provocations on Aug. 20.

President Park Geun-hye convened an emergency meeting of the National Security Council (NSC) after receiving a brief from Presidential Security Adviser Kim Kwan-jin, the chief of the NSC. During the meeting, she ordered the South Korean military to respond sternly to provocations from the North and to maintain the highest level of alert, while emphasizing the importance of protecting the safety of the citizens at the same time.