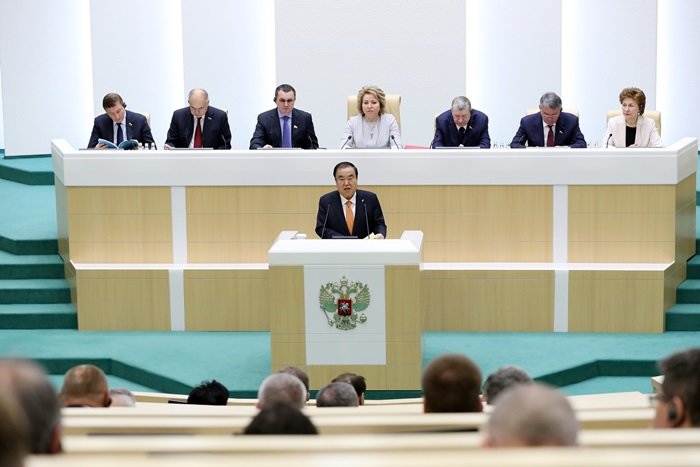 National Assembly Speaker Moon Hee-sang on May 29 gave a speech at the Russian Federation Council in Moscow stressing peace and prosperity on the Korean Peninsula and the opening of a Eurasian era.

As the first South Korean parliamentary speaker to deliver a speech at the council, Moon said, “To resolve North Korea’s nuclear issue and achieve peace on the Korean Peninsula, we need not only the cooperation and wisdom of the two Koreas and the U.S. but also that of international society including Russia.”

“Russia understands North Korea’s policy and situation and can have deep talks with the North,” he said, adding, “Russia will build a positive diplomatic environment to resolve North Korea’s nuclear issues.”

“When peace arrives on the Korean Peninsula and North Korea opens its door, the crossroad of the continent and the ocean will open,” he said. “Mutual cooperation between (South) Korea and Russia will be a full-fledged flare that will signal trilateral cooperation among the two Koreas and Russia.”

Moon flew back to Seoul on June 5 after going on a 10-day trip to Russia and three Baltic nations that began on May 27.