“The role of the PyeongChang 2018 Winter Olympics Counter-Terrorism and Safety Measures HQ (CTSM HQ) is to act as the control tower for countermeasures related to any and all terrorist or terror-like incidents at the PyeongChang Olympics,” said Mun Yeong Gi, chief of the CTSM HQ.

Launched in November 2016, the CTSM HQ is an umbrella organization comprised of 19 different government ministries and other institutions directly involved in counter-terrorism and law enforcement.

In preparation for the upcoming PyeongChang 2018 Olympic and Paralympic Winter Games, the CTSM HQ is overseeing all counter-terrorism and security measures. During the Games, it will be the head of all operations, delegating tasks to subordinate bodies and monitoring all activities from the field command center.

Korea.net met with Mun, chief of the CTSM HQ, to learn more about his organization’s roles and activities, at the Government Complex Seoul on Dec. 7.

– What’s the main role of the CTSM HQ?

The CTSM HQ formulates all security measures. It also allocates security guards to areas surrounding all the major sporting events, all while managing the inflow of traffic.

Based on the duties and functions of each ministry that the CTSM HQ oversees, we will also be responsible for fire prevention and extinguishment, as well as rescue operations in the case of any emergency situation.

– How will you control everything that takes place during the PyeongChang Olympics?

The sports venues and athletes’ dormitories are located in Pyeongchang, Gangneung and Jeongseon. As it’s necessary to ensure safety and security at each of the major venues, we have set up 18 field command centers.

At these centers, you’ll be able to find at least one or two professionals from each of the 19 government ministries in the CTSM HQ network, such as the National Counter-Terrorism Center, the National Police Agency, the Ministry of National Defense, the National Fire Service and the Center for Disease Control and Prevention.

– How will you comprehensively manage all the field command centers, scattered as they are in so many different areas?

This October, we set up an integrated security information center that will be the control tower for the 18 field command centers.

In addition to carrying out daily functions, this control tower will send out important updates should a terrorist attack or other security-related event occur during the PyeongChang Games. It will regulate and control all activities of the other field command centers.

Our integrated security information center will be closely aligned with the PyeongChang Organizing Committee. 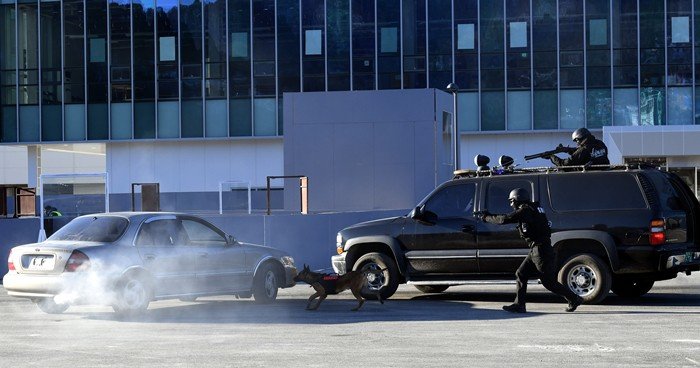 A national counter-terrorism drill, arranged by Prime Minister Lee Nak-yon, is held at the Pyeongchang Olympic Plaza in Gangwon-do Province on Dec. 12. The National Counterterrorism Commission, the PyeongChang Organizing Committee for the 2018 Olympic & Paralympic Winter Games (POCOG), and other related organization took part in the drill. (Prime Minister’s Secretariat)

– How are you preparing for a possible terrorist attack?

Domestically, we have all possible forms of terror-like situations under control. So in the days leading up to the opening, and during the actual event, we will focus our attention on managing the entry of potentially dangerous persons into the country from abroad. Obviously, this is part of the protocol for prevention.

In the event of a terrorist attack, it’s crucial that we execute the action plan in a swift manner.

I want to assure you that we are preparing for every worst case scenario. We are ready to face chemical terrorism, bioterrorism, and nuclear provocations.

There are 7km of evacuation facilities for over 2,000 people and some cars.

Evacuation facilities at airports, ports, train stations and along the highway are also fully equipped and ready for any type of terrorist attack.

– Do you have any words for people around the world who are eagerly awaiting the PyeongChang 2018 Olympic and Paralympic Winter Games?

Korea was chosen as one of the countries with the least risk of terrorism in a map of “countries facing the greatest threat from terrorism,” published by The Telegraph in 2016.

In the Global Terrorism Index 2017, compiled by the Institute for Economics and Peace (IEP), Korea ranked 103rd out of 163 countries in the study, meaning that Korea is one of the countries with the lowest risk of terrorism.

Given that the U.S. ranked 32nd, the U.K. 35th, and Japan 58th, we can conclude that Korea is quite safe from terrorism.

Moreover, Korea has hosted a number of international events, including the Seoul 1988 Olympic Summer Games, the 2002 FIFA World Cup and the 2010 G20 Seoul summit. These events have all been successfully held.

There is no need to worry about safety. Pyeongchang is ready to host one of the world’s biggest festivals. I look forward to meeting you at the PyeongChang Games in February.