President Moon Jae-in from Oct. 28 to Nov. 5 made official visits to three European nations. From Oct. 28-31, he went to the Roman Curia and attended the summit of the Group of 20 (G20) economies in Rome. From Nov. 1-2, he attended the 26th United Nations Climate Change Conference (COP26) in Glasgow and from Nov. 2-5, he was in Hungary on a state visit. On his latest European tour, the president said he felt global attention toward Korea at the G20 summit and COP26 and reaffirmed strong global support for peace on the Korean Peninsula. The following are photos of his trip. 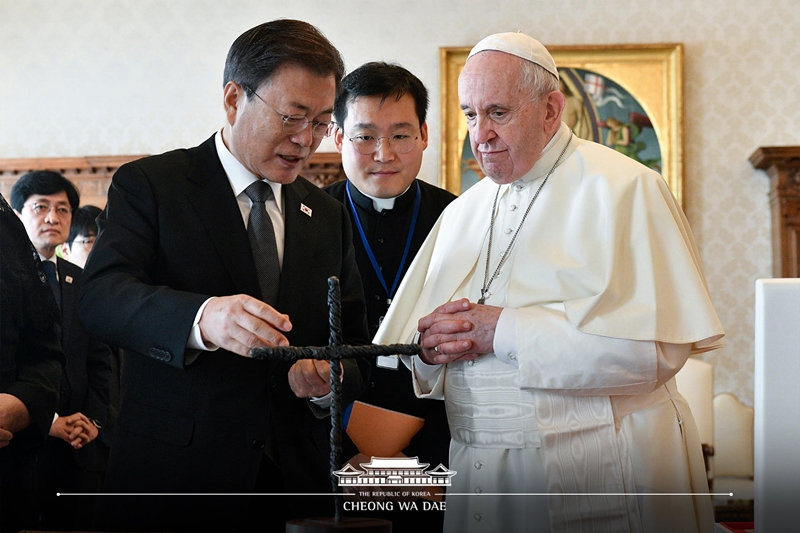 President Moon Jae-in on Oct. 29 held individual talks with Pope Francis in an official visit to the Roman Curia in Rome, Italy. The president thanked the pope for holding Mass for peace on the Korean Peninsula during the chief executive’s last visit to Vatican City and blessing efforts toward dialogue for peace and reunification on the peninsula. Pope Francis said that if invited by North Korea, he will gladly visit the North for helping Koreans and peace. The photo shows President Moon giving a “cross of peace” made of melted barbed wire from the Demilitarized Zone (DMZ) in Goseong-gun County, Gangwon-do Province. President Moon and first lady Kim Jung-sook on the afternoon of Oct. 29 attend the exhibition “Barbed Wire, Heralds of Peace” at the Church of St. Ignatius of Loyola in Rome. The event featured an installation work of the Korean Peninsula with 136 “crosses of peace” made of melted barbed wire from the DMZ. The crosses symbolize the pain of national division the two Koreas have suffered for 68 years as well as the achievement of peace through reunification. 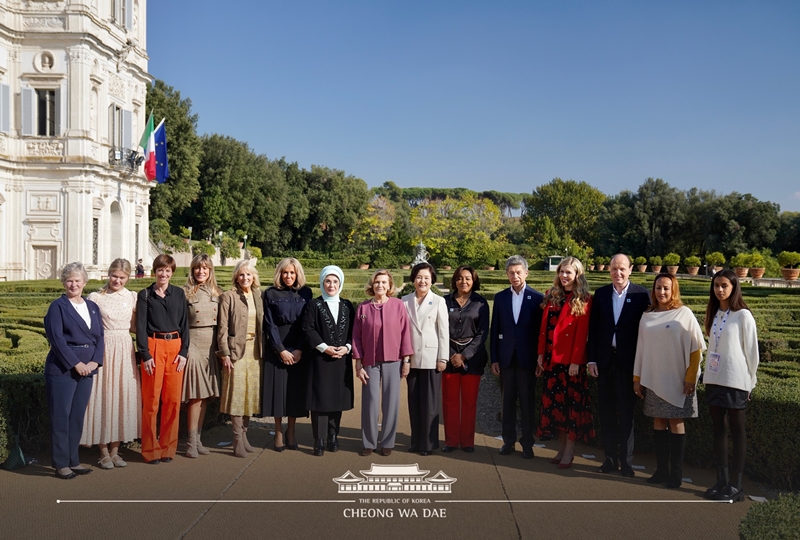 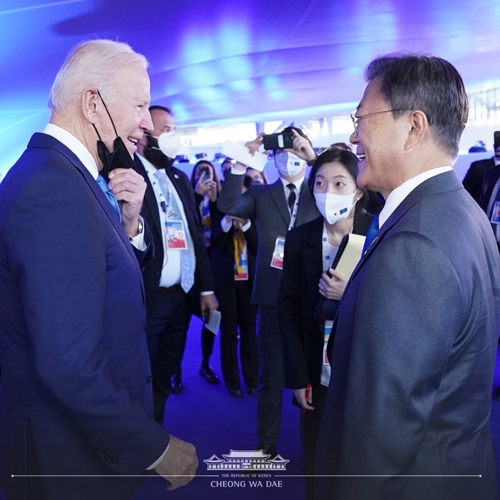 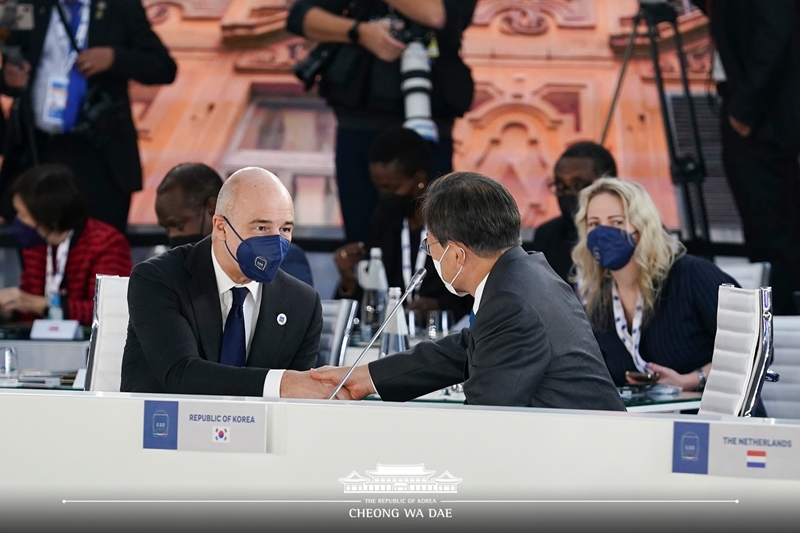 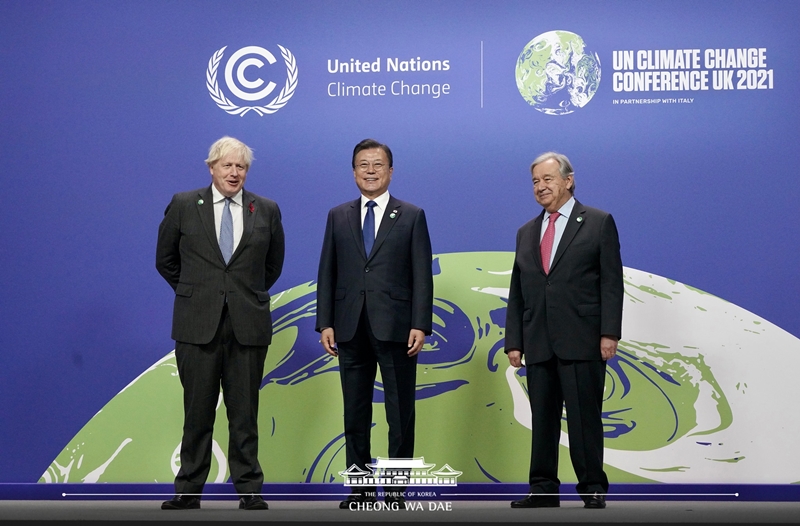 President Moon on the morning of Nov. 1 attended the opening ceremony of the 26th United Nations Climate Change Conference (COP26) in Glasgow, the U.K. Here, he takes a commemorative photo with British Prime Minister Boris Johnson (left), the host of the conference, and U.N. Secretary-General Antonio Guterres (right) after greeting them with elbow bumps. 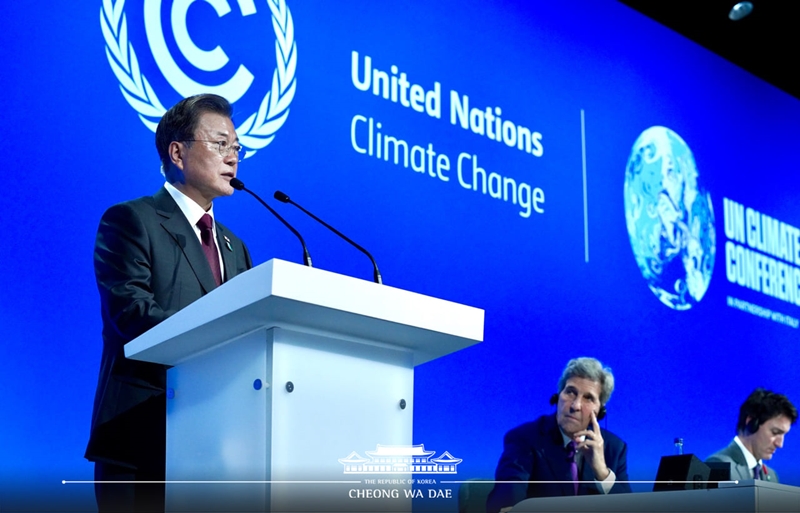 President Moon on the afternoon of Nov. 2 speaks at the launching ceremony for the Global Methane Pledge in Glasgow. “Throughout this year, the world has spurred breathlessly for ‘Carbon Neutrality,'” he said. “And today, we have made yet another accomplishment – the Global Methane Pledge.” The pledge is an international treaty aimed to reduce global methane emissions at least 30% by 2030 from 2020 levels as a response to climate change. 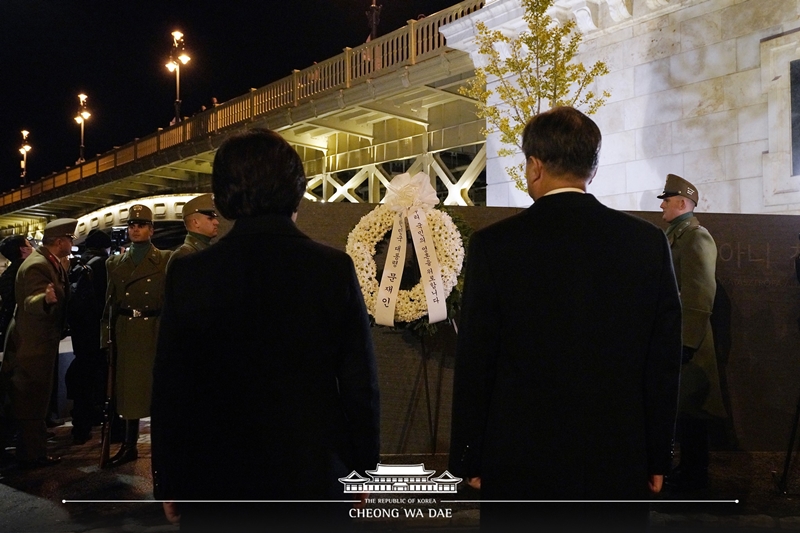 Upon arrival in Hungary on the evening of Nov. 2, President Moon visited the Danube River to honor the Korean victims who died in May 2019 in a ferry sinking on the river. He and first lady Kim Jung-sook laid a wreath there with a ribbon inscribed with the message “We console the souls of our people.” They paid a silent tribute to the victims as a military band performed. 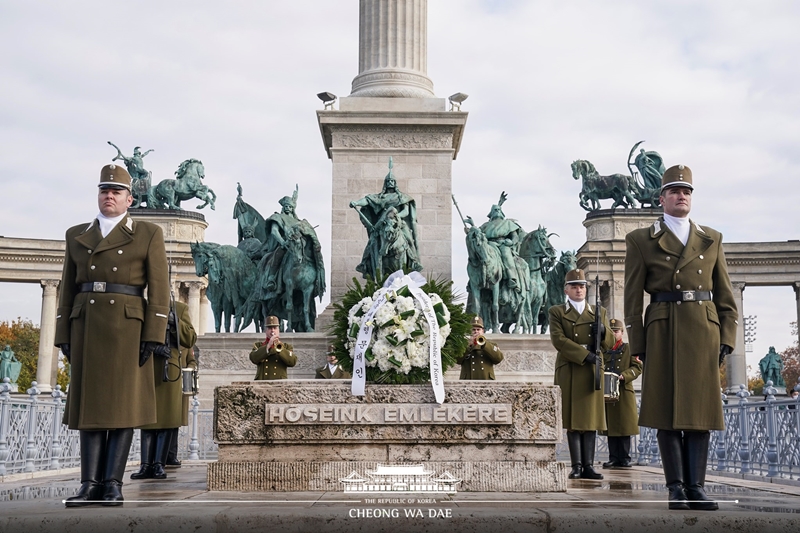 President Moon, ahead of the official welcoming ceremony at the Hungarian presidential palace, on the morning of Nov. 3 visited Heroes’ Square in Budapest to inspect honor guards and lay a wreath at the tombs of unknown soldiers. 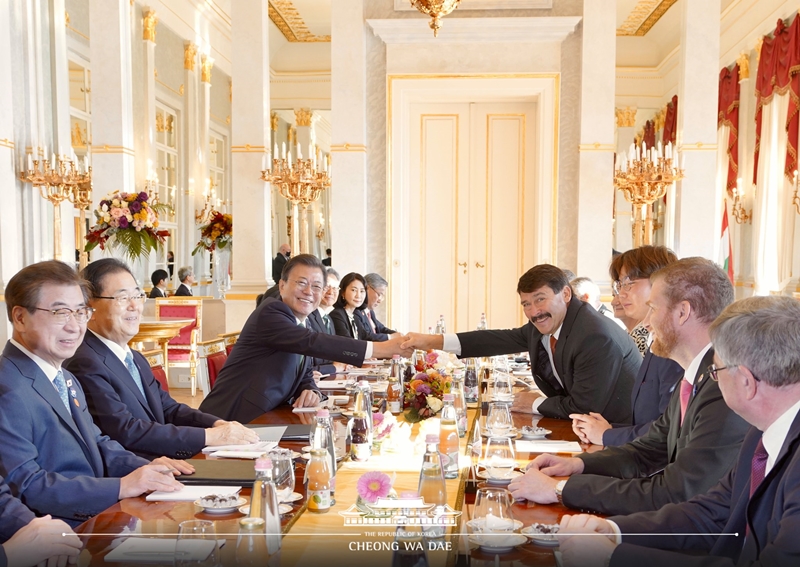 President Moon on the morning of Nov. 3 holds a summit with Hungarian President Janos Ader at the presidential palace in Budapest and agrees to upgrade bilateral relations to the level of a “strategic partnership.” He was the first Korean leader to visit the Eastern European country in 20 years since President Kim Dae-jung in 2001. 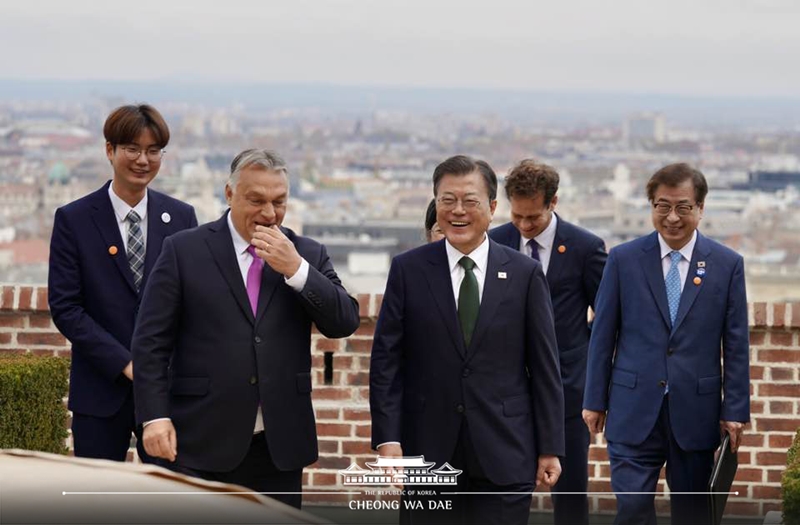 President Moon on the afternoon of Nov. 3 takes a stroll at a garden with Hungarian Prime Minister Viktor Orban before attending a luncheon at the latter’s office. At the luncheon, the president said he was happy to visit Hungary, which he called full of “splendid history and culture.” Both countries have built trust through the values of democracy and market economy as the foundation of bilateral ties formed in 1989, he said, adding that bilateral economic cooperation and human exchange have expanded thanks to the prime minister’s Ostpolitik (Eastern Policy). 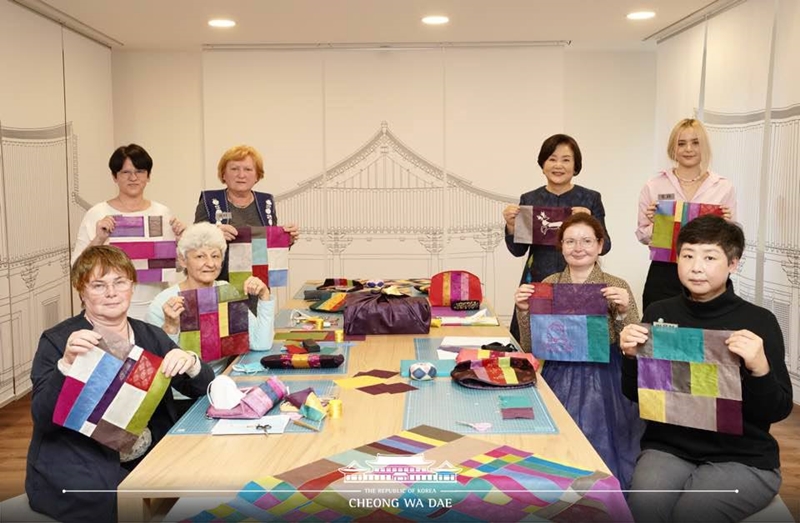 First lady Kim Jung-sook on the morning of Nov. 4 visited the Korean Cultural Center in Hungary to make jogakbo (patchwork made from colorful scraps of cloth) with students there. She called Koreans “upcycling” artists who use scraps rather than discard them and create beauty from things in everyday life. She also said every home in Korea uses Mondrian-class art products as tablecloths. 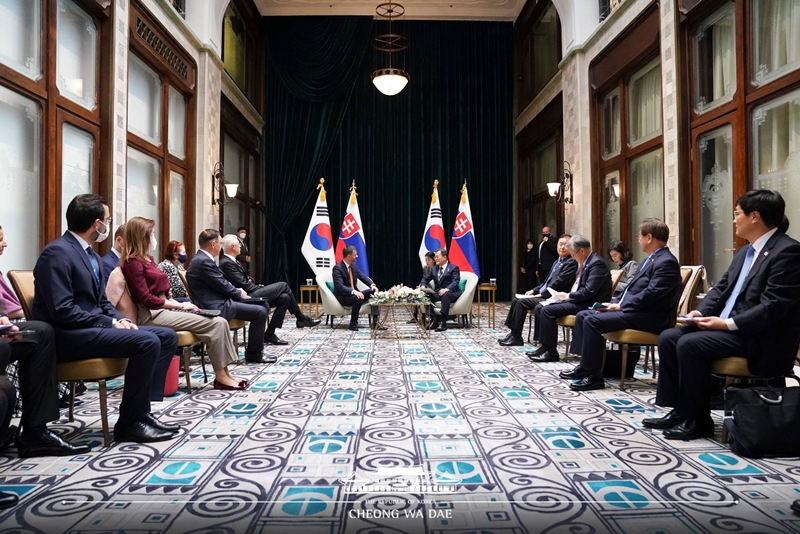 President Moon on Nov. 4 attends a bilateral summit with Slovakian Prime Minister Eduard Heger, who attended the second Korea-Visegrad Group meeting in Budapest. Both leaders appraised the development of bilateral cooperation in sectors like national affairs, economy and culture since the formation of diplomatic ties in 1993.