President Moon Jae-in returned home on the evening of Sept. 23 after wrapping up his three-night, five-day trip to New York and Hawaii. His itinerary included a keynote address at the 76th United Nations General Assembly, bilateral summits with the leaders of the U.K., Vietnam and Slovenia, a posthumous awards ceremony for Korean independence fighters in Hawaii, and the repatriation of the remains of Korean and American troops killed in the Korean War. The following are photos of his latest trip. 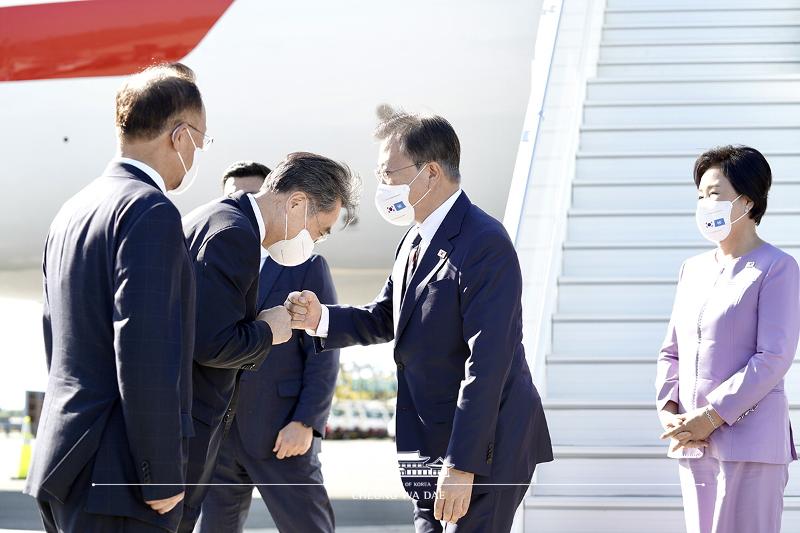 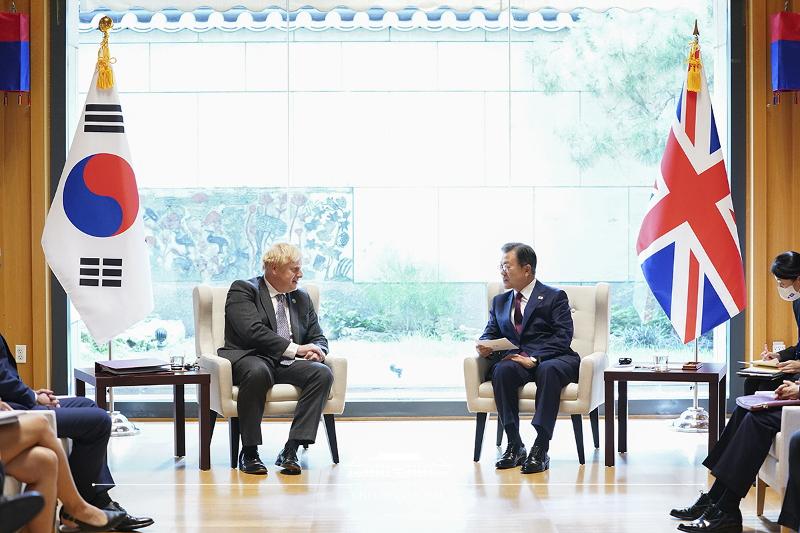 President Moon Jae-in (second from left) and British Prime Minister Boris Johnson on Sept. 20 hold a bilateral summit at U.N. headquarters in New York. Ahead of the talks, both governments announced the signing of a vaccine swap accord, under which Korea this month will receive a million doses of mRNA COVID-19 vaccines from the U.K. and send the same amount by December.

President Moon Jae-in and Slovenian President Borut Pahor on Sept. 20 pose for photos after holding an awards ceremony at U.N. headquarters in New York. President Moon gave his Slovenian counterpart the Grand Order of Mugunghwa for his contributions toward developing bilateral relations and the Slovenian government’s active support for the peace process on the Korean Peninsula. President Pahor reciprocated with a special medal for President Moon for the latter’s efforts toward maintaining peace on the peninsula.

President Moon Jae-in on Sept. 21 delivers a keynote speech at the 76th U.N. General Assembly at U.N. headquarters in New York. He proposed that the two Koreas and the U.S. or all three parties plus China jointly declare a formal end to the Korean War. The president thus made the fifth and last speech at the U.N. session of his term, being the only Korean head of state to attend and give keynote speeches at all high-level meetings of the assembly during his presidency.

President Moon Jae-in on Sept. 21 holds a summit with Vietnamese Prime Minister Nguyen Xuan Phuc at a hotel in New York. “Korea will provide 1 million doses of COVID-19 vaccines to Vietnam by this October,” the president said.

President Moon Jae-in and Pfizer CEO Albert Bourlar on Sept. 21 pose for photos before their meeting at a hotel in New York. The president discussed additional purchases of COVID-19 vaccines next year with the executive and requested early supply of the vaccines. 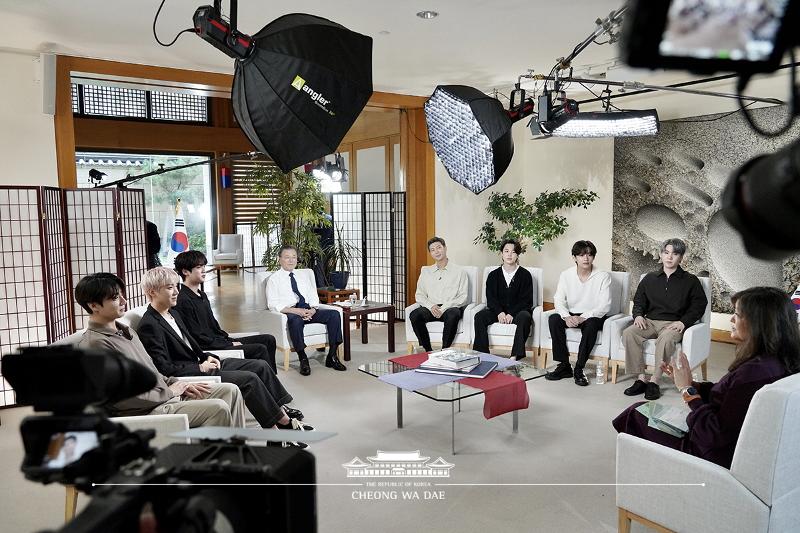 President Moon Jae-in and K-pop sensation BTS on Sept. 21 hold an interview with ABC of the U.S. at U.N. headquarters in New York. 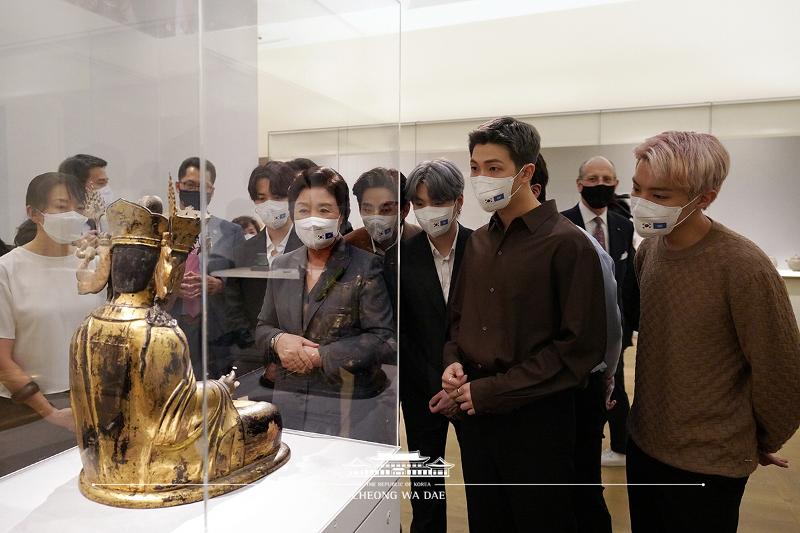 First lady Kim Jung-sook and BTS on Sept. 21 visit the Arts of Korea Gallery of the Metropolitan Museum of Art in New York. 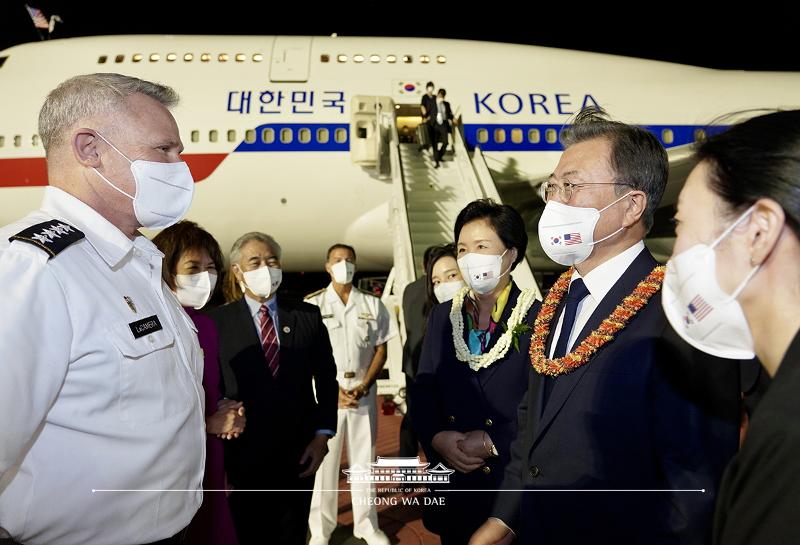 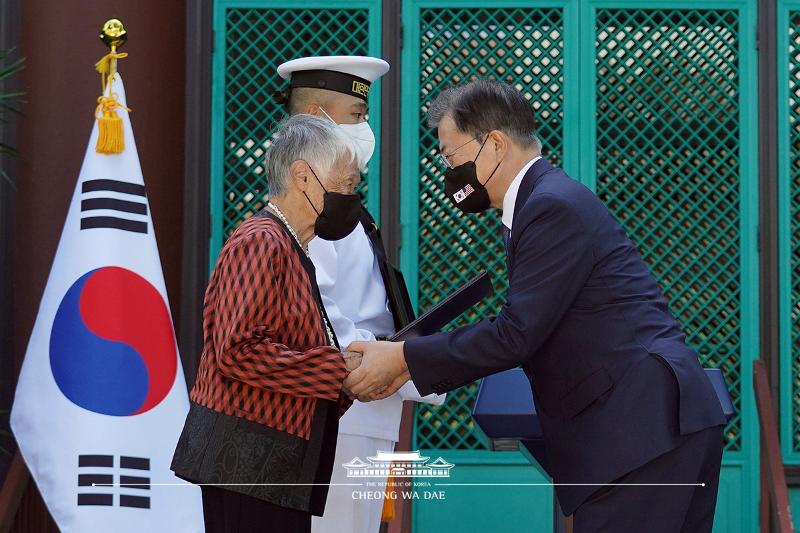 President Moon Jae-in on Sept. 22 gives the Patriotic Medal of the Order of Merit for National Foundation to a descendant of the late patriot Kim No-di at the Center for Korean Studies of the University of Hawaii, Honolulu. This is the first time for a Korean head of state to bestow medals to honor Korean independence figures who were active overseas. 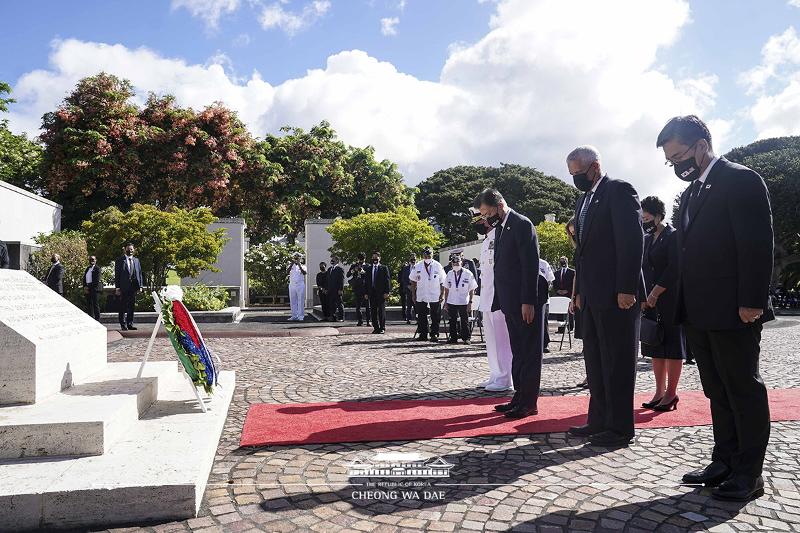 President Moon Jae-in and first lady Kim Jung-sook on Sept. 22 pay a silent tribute after laying a wreath at the National Memorial Cemetery of the Pacific at Punchbowl Crater in Honolulu, Hawaii. 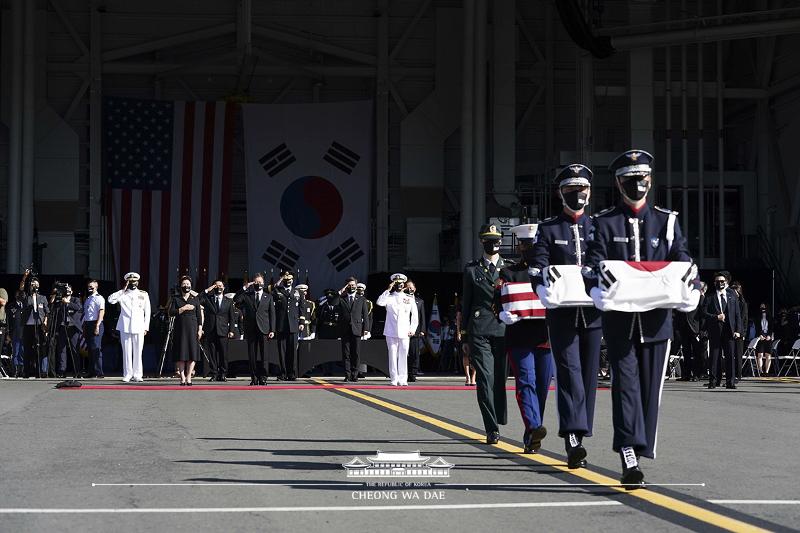 President Moon Jae-in and first lady Kim Jung-sook give a salute while the remains of Korean and American soldiers killed in the Korean War are loaded on the presidential plane Code One. The chief executive was attending a ceremony for the repatriation of such remains at Hanger 19 of the U.S. military’s Joint Base Pearl Harbor-Hickam in Hawaii. This was the first time for a Korean president to directly oversee a ceremony abroad for the transfer of the remains of soldiers killed in the war. The remains of 68 Korean soldiers were returned home with President Moon, who on the same day wrapped up his trip to the U.S. and flew home. The remains of six American soldiers were also returned to the U.S., including one set that was repatriated in 2018.

President Moon Jae-in on Sept. 23 pays a silent tribute to the remains of Pvt. First Class Kim Seok-joo after putting them inside the presidential plane with Kim’s descendant, 2nd Lt. Kim Hye-soo, on the way home.