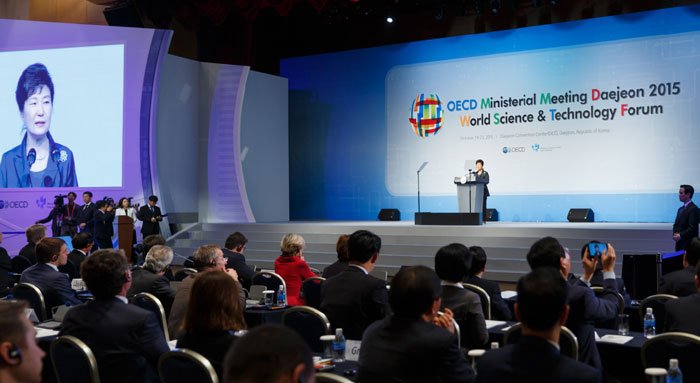 The OECD Ministerial Meeting Daejeon 2015 opens on Oct. 20. Ministers and vice ministers from 57 countries and the heads of 12 international organizations attended the gathering.

The OECD Ministerial Meeting Daejeon 2015 opened in Daejeon on Oct. 20. The theme this year is “Scientific and Technological Innovation that Shapes our Future.”

This is the main event of the five-day international gathering. It is attended by ministers and vice ministers from 57 countries and the heads of 12 international organizations, including OECD Secretary General Angel Gurria and ASEAN Secretary-General Le Luong Minh.

In the opening ceremony, President Park Geun-hye emphasized international cooperation on science and technology in order to solve issues facing the global economy.

“To solve crises faced by the world economy, such as long-term economic stagnation, we need to carry out decisive innovation based on science, technology and innovation,” said President Park.

“The power of Korea’s economic development is rooted in its unsparing investment in science and technology, and in incubating talented human resources,” said the president.

“An African proverb says, ‘It takes a village to raise a child.’ To help our youth grow as talented people in terms of science and technology, every country from around the globe should come together to help them,” said President Park. 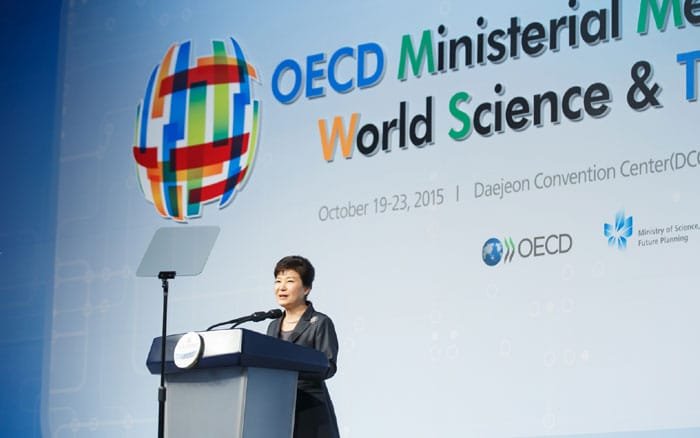 President Park Geun-hye emphasizes the importance of bold innovation based on science, technology and innovation in order to overcome crises faced by the world economy. She was speaking during the opening ceremony of the OECD Ministerial Meeting Daejeon 2015.

“We can also develop more innovative technology and expand into global markets if we can make use of the strengths of each country and cooperate together actively,” she said.

President Park urged the OECD to make efforts so that more countries could take part in science and technology innovations through regional cooperation, as the OECD has been contributing to the development of both the economy and society of the world. 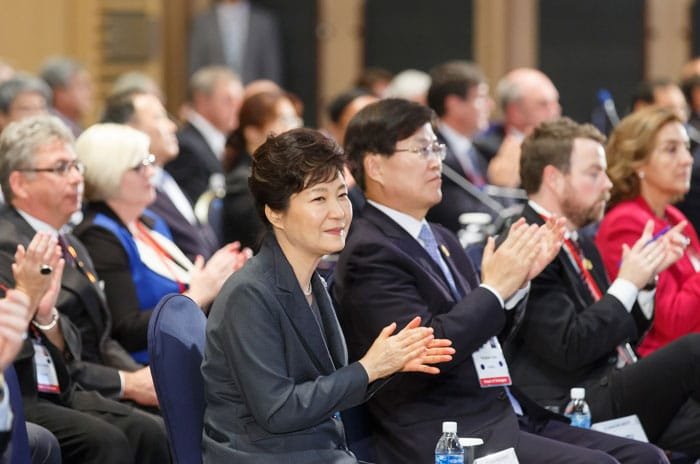 President Park Geun-hye poses for a photo with other dignitaries at the OECD Ministerial Meeting Daejeon 2015.