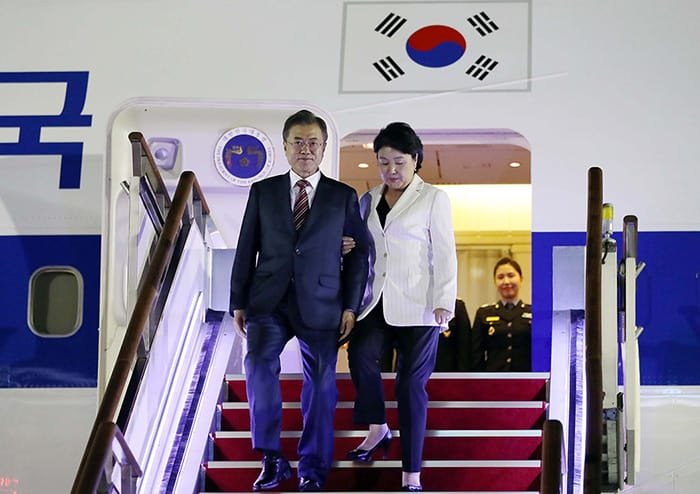 President Moon Jae-in and first lady Kim Jung-sook deplane at the Seoul Base Airport in Seongnam-si, Gyeonggi-do Province, on May 24 after the president’s summit with his U.S. counterpart, Donald Trump.

President Moon Jae-in returned home at 12:40 a.m. on May 24 after wrapping up his visit to Washington, D.C., to hold a summit with U.S. President Donald Trump, the fourth such meeting since President Moon’s inauguration.

The two leaders held a one-on-one meeting and then an expanded summit and vowed to work together to make a U.S.-North Korea summit possible as scheduled on June 12.

They discussed possible ways to cooperate on how to compensate North Korea for its denuclearization, on dealing with issues concerning the Korean Peninsula, and on peninsular peace.

Before returning to Seoul, President Moon paid a visit to what used to be the Joseon legation building during the Korean Empire in Washington, D.C. 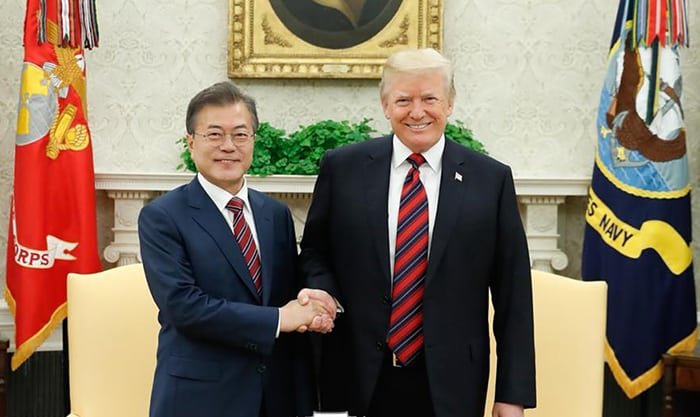 President Moon Jae-in (left) shakes hands with his U.S. counterpart, Donald Trump, prior to their one-on-one meeting at the White House in Washington, D.C., on May 22.

At the White House meeting, President Moon Jae-in stressed that there’s no need for doubt over the North’s willingness to attend a Washington-Pyeongyang summit, and that there’s need for concrete negotiations between the two countries to achieve denuclearization and stability of the North Korean regime.

“President Trump will be able to bring an end to the Korean War that has lasted over the past 65 years, and achieve complete denuclearization by making any summit with North Korean leader Kim Jong Un successful,” said President Moon. “I’m also sure that diplomatic relations between the U.S. and the North will be resumed and will be back to normal, as well as the establishment of permanent peace on the peninsula.”

“It’s thanks to President Trump’s strong vision and leadership that the Washington-Pyeongyang summit has been made possible, a first in history. We’re now closer toward the dream of complete denuclearization and world peace,” he added.

Regarding voices of concern over whether the June summit will be held or not after Pyeongyang’s recent change of attitude, President Moon believed that the summit would be taking place as planned. “My role is not to serve as a mediator between the U.S. and the North, but to help the summit to be successful and to cooperate closely with the U.S., as the outcome of the talks will have a significant impact on the fate of the peninsula and South Korea,” he stressed. 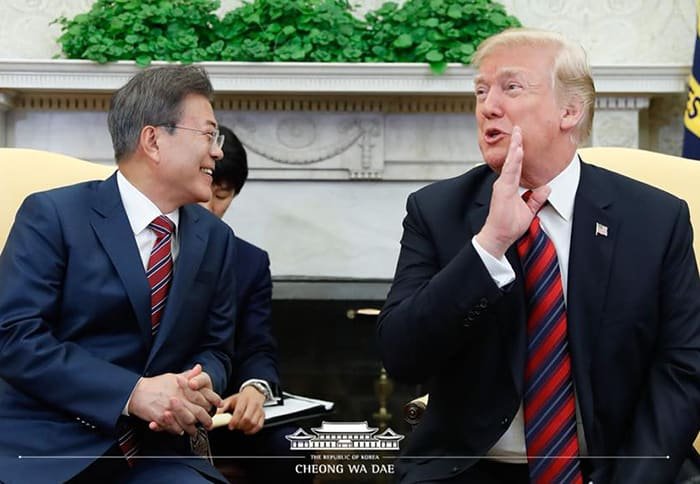 President Moon Jae-in (left) and U.S. President Donald Trump answer questions from the press prior to their summit at the White House in Washington, D.C., on May 22.

“Obviously North Korea is the big one among the many things we’re working on,” said President Trump. “We’ll see whether or not the Singapore summit happens, but if it does, that’ll be great. It’ll be a great thing for North Korea.”

The U.S. leader went on to say that, “I have tremendous confidence in President Moon. I think he wants to have what’s good for the Korean Peninsula, not just the North or South, for the entire Korean Peninsula. His way, the way he is, really is helping us to potentially make a deal.”

The two leaders also shared their thoughts that the leaders of South, North Korea and the U.S. would jointly declare an end to the war on the peninsula, as the leaders of the two Koreas did in the April 27 Panmunjeom Declaration following the U.S.-North Korea summit.