President Park Geun-hye will visit New York for four days, from Sept. 25 to 29, for the United Nations Sustainable Development Summit 2015 and the 70th Session of the U.N. General Assembly.

President Park will deliver a keynote speech on Sept. 26 at the plenary meeting of the United Nations Sustainable Development Summit 2015. She will then attend a high-level special forum on Saemaul Undong, which will be co-hosted by the U.N. Development Plan and the Organization for Economic Cooperation and Development (OECD), as well as a high-level meeting of the Global Education First Initiative. 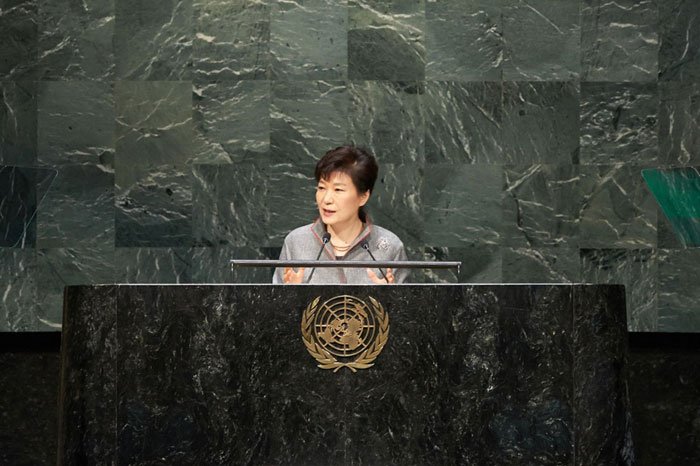 President Park and Chilean President Michelle Bachelet will co-chair the Interactive Dialogue of the UN Sustainable Development Summit on Sept. 27. President Park will then participate in a luncheon meeting on the issue of climate change with leaders of major countries. She will exchange views with them on measures to successfully forge a new climate change regime at the 21st session of the Conference of the Parties of the UN Framework Convention on Climate Change (COP21), which will be held in Paris at the end of this year.

The next day, President Park will deliver a keynote speech at the UN General Assembly. In the address, she will express some Korean views on the progress of the U.N., which is marking its 70th anniversary, on its future direction, and on the main agenda items of this year’s General Assembly. She will also express Korea’s will to actively contribute to key global issues, such as world peace, international security, development, and climate change.