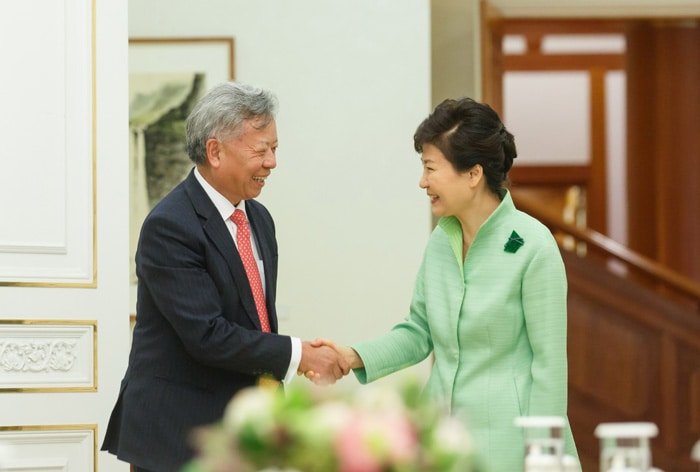 President Park expressed her gratitude toward Jin for choosing Korea as the first country on his tour of AIIB member nations.

“I hope that the AIIB will make every endeavor to expand investment in infrastructure and promote economic development in Asia,” said the president. “Korea will actively cooperate so that the AIIB will serve as a catalyst for Asia’s economic development. To this end, please take an interest in Korean businesses and financial institutions that are very competitive and experienced in infrastructure-related investment, as well as talented Korean human resources, so that they can work for the AIIB.”

“Korea’s decision to join the AIIB greatly helped its launching,” said Jin. “When the Chinese government planned the establishment of an AIIB, it immediately thought of Korea as its first potential partner, placing much expectation on the country. Active participation by talented Koreans and Korean businesses is absolutely necessary if the AIIB is to become a first-class multilateral development bank and make contributions to Asia’s development,” added Jin, asking for an early ratification of the AIIB convention.

“Korea’s rapid economic development achieved in a short period of time has become a role model for China’s opening and reform. I witnessed Koreans’ immense potential when I saw the campaign to collect gold during the Asian financial crisis in 1997,” said Jin. “Also, many Chinese people, including myself, were deeply moved after reading President Park’s autobiography. They express respect for President Park’s courage, integrity and sense of duty, holding the president in high regard.” President Park Geun-hye says Korea will actively cooperate so that the AIIB can serve as a catalyst for Asia’s economic development, during a meeting with Jin Liqun, first president-designate of the Asian Infrastructure Investment Bank.

“Guiding North Korea toward reform and opening is imperative for peace and prosperity across Asia,” said the president. “If North Korea gives up its nuclear ambitions, we will push ahead with the establishment of a Northeast Asian development bank in cooperation with the international community.”

“A Northeast Asian development bank could focus on Northeast Asia, including North Korea, the three northeastern provinces of China and the Maritime Province in Russia, and will be complementary to the AIIB, encouraging mutual development,” said the president. “If conditions are met in the future, and if Korea goes ahead with the founding of a Northeast Asian bank, I hope that president-designate Jin will actively support its establishment.”

Highly appreciating President Park’s efforts on the matter, president-designate Jin said, “The AIIB will provide active support so that a Northeast Asian development bank, the Eurasian Initiative led by President Park and China’s ‘One Belt, one Road’ initiative, will make great accomplishments in harmony with each other.”