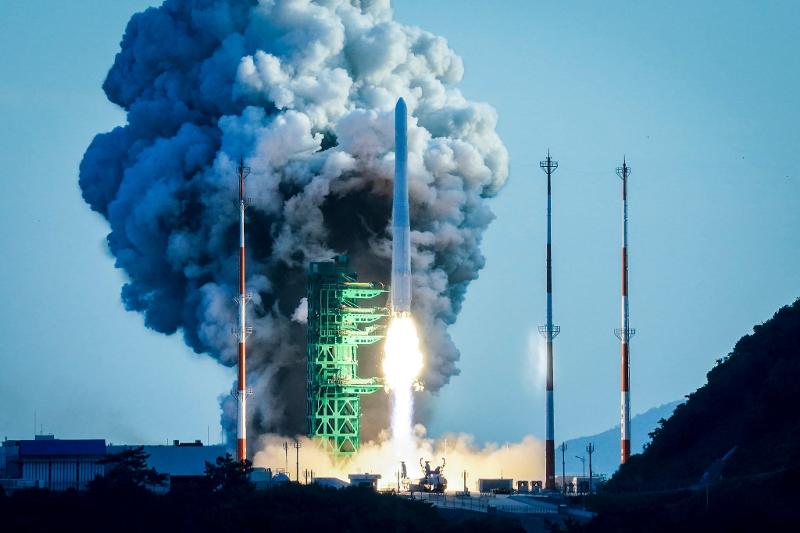 The domestically made Korea Space Launch Vehicle-II, also known as Nuri, took off on Oct. 21. Though its objectives were not fully achieved, the launch did fulfill major stages to verify its flying capacity.

The Ministry of Science and ICT on Oct. 21 said that after Nuri took off at 5 p.m. from the Naro Space Center in Goheung-gun County, Jeollanam-do Province, the first-stage, fairing and second-stage boosters separated successfully but the dummy satellite failed to enter the target orbit around Earth.

Nuri reached its target altitude of 700 km before the dummy satellite was successfully ejected. The combustion of the booster in the third and final stage, however, ended 46 seconds prematurely. Thus the booster failed to reach the speed of 7.5 km per second necessary to maintain its orbit and its mock payload did not enter orbit.

President Moon Jae-in, who watched the launch at the launch pad, encouraged the engineers, saying they developed a precise and highly advanced space rocket without anyone else’s help, adding that the country’s space age was just around the corner.

The second liftoff of Nuri is slated for May next year. Through 2027, four additional launches of the rocket are scheduled to verify the performance of the real satellite now in development.

Nuri is a three-stage rocket whose purpose is to send a 1.5-ton satellite into a low orbit of 600-800 km above Earth. An investment of KRW 1.95 trillion since March 2010 has gone into developing the nation’s first domestically developed projectile in all processes including planning, production, testing and verification.

Bloomberg said that by launching Nuri, Korea showed “a leap in aerospace technology that can be used for both commercial and military purposes.” It added that the nation is just one of a few countries that developed and launched their own space vehicles.

Reuters said Nuri saw a stable launch but failed to place in orbit its “dummy satellite,” thus “delivering mixed results for a test launch that represents a major leap for the country’s ambitious space plans.”

Deutsche Welle of Germany called Nuri’s launch a “successful premiere” and covered the liftoff process in detail. It also called Korea a country with an “ambitious” space exploration project and a participant in the Artemis program of NASA for a manned mission to the moon.

AFP of France, Voice of America and Japan’s Yomiuri Shimbun and Kyodo News all gave detailed coverage of the results and significance of Nuri’s launch.