Uzbek Ambassador to Korea Vitali V. Fen praises the potential of the proposed free trade agreement (FTA) between Korea and his country.

“President Moon Jae-in’s proposal for early conclusion of the FTA will offer new opportunities for both countries to boost economic trade and development, attract Korean corporate investment and deepen bilateral cooperation,” he said in a written interview with Korea.net on March 30.

“Korea and Uzbekistan have held more than ten rounds of negotiations on joint research projects on cooperation in the FTA including its economic effects on expanding bilateral trade, the agreement’s economic feasibility and tariffs.”

President Moon and Uzbek President Shavkat Mirziyoyev on Jan. 28 announced the launch of free trade negotiations in a phone summit.

“Despite the COVID-19 pandemic, both countries successfully completed last year the establishment of the National Children’s Medical Center in Tashkent and the Korea International University in Fergana,” the ambassador said.

“We hope to express our gratitude to the Korean government for helping us overcome COVID-19 and expand bilateral cooperation in medicine and pharmaceuticals.”

He added, “We support the ‘Green New Deal’ of the Korean government to respond to climate change, reduce harmful gas emissions, increase the use of renewable energy and propel a transition toward a low-carbon economy.”

Serving as charge d’affaires at the Uzbek Embassy in Seoul from 1995-99, the diplomat later served as Uzbek ambassador extraordinaire and plenipotentiary in Korea from 1999 to 2013. In 2014, he received the Gwanghwa Order of Diplomatic Service Merit, the Korean government’s highest honor for diplomacy. In 2017, he returned to Korea for a second stint as Uzbek ambassador extraordinary and plenipotentiary.

– How was bilateral cooperation amid COVID-19 last year?

Regardless of the challenges and difficulties, the special strategic partnership between the two countries is making progress. Through phone summits between their leaders in April and October last year, both sides discussed joint measures for overcoming COVID-19 and diversified methods of economic cooperation. President Mirziyoyev on Oct. 30 last year delivered a keynote speech on effective responses to COVID-19 and economic development via teleconferencing at the invitation of the 2020 International Forum for Northern Economic Cooperation in Seoul. Another notable thing was that the first overseas delegation to visit Korea after COVID-19’s outbreak was from Uzbekistan. These are part of our efforts to reaffirm and develop bilateral relations.

On COVID-19 quarantine, we Uzbekistan thank Korea for helping us overcome the coronavirus. Korean medical experts, including Dr. Choi Jae Wook, professor of preventive medicine at Korea University’s Medical University Prevention School, shared their expertise and know-how with Uzbek medical specialists. In September last year, the Uzbek government awarded professor Choi the highest Uzbek order of merit for a health professional. Last year, the two countries successfully completed the establishment of the National Children’s Medical Center in Tashkent and the Korea International University in Fergana, creating approximately 1,000 jobs. The construction of a pharmaceutical cluster in Tashkent backed by Korean corporate cooperation is in full swing with no delay. Uzbekistan especially hopes to bolster bilateral cooperation in the health and medical sectors, specifically in the development of accurate diagnostic systems for disease, vaccines and serums, modernization of border quarantine, disinfection and lab facilities, and fostering of disease specialists and virus researchers in collaboration with Korean medical universities.

– How is bilateral cooperation nowadays?

Since forging diplomatic relations in 1991, Korea and Uzbekistan have developed longstanding friendly ties. Korea today is Uzbekistan’s fourth-largest trading partner. According to the State Committee of the Republic of Uzbekistan on Statistics, bilateral investment reached USD 2.8 billion in 2019 and USD 2.1 billion last year. After both countries signed a bilateral visa waiver program in 2018, the number of Korean tourists in Uzbekistan in 2019 increased 30% to 36,000. Despite COVID-19 last year, about 7,000 Koreans visited Uzbekistan. Our embassy is continuing negotiations with Korea’s Animal and Plant Quarantine Agency to allow Uzbek fruit and vegetable imports in Korea.

– In 2019, the leaders of both countries agreed on the importance of education and human resource development. What progress has education exchanges seen?

Cooperation in education is also developing in a dynamic manner. Universities in Uzbekistan are working with 45 Korean research institutes on joint science projects. The Korean universities of Inha, Bucheon and Ajou and the Korea International University in Fergana operate branch campuses in Uzbekistan. Other Korean universities have also set up branches in Uzbekistan, including Seowon University’s campus in Nukus. The Uzbek people are also highly interested in the Korean language and culture. For this reason, the Tashkent branch of King Sejong Institute, which teaches Korean, must also be counted.

– President Moon in his New Year’s speech stressed his commitment to conclude the FTA with Uzbekistan. What stage are the negotiations at?

The FTA will offer new opportunities for both countries to boost the development of economy and trade, attract Korean corporate investment and deepen bilateral cooperation. Korea and Uzbekistan have held more than ten rounds of negotiations on joint research projects on cooperation in the FTA, including its economic effects on expanding bilateral trade, the agreement’s economic feasibility and tariffs.

– Uzbekistan is pushing a long-term plan to have a large part of its power production come from renewable energy. What is being done for this energy transition?

The Uzbek government supports the Korean government’s Green New Deal, which seeks to respond to climate change and transform Korea into a low-carbon economy. We are prepared to adopt Korea’s modern technologies and advanced experience and implement joint investment ventures within the framework of Seoul’s New Northern Policy.

In February 2019, Uzbekistan established the Ministry of Energy to oversee the use of renewable energy and implement related government policy. In May that year, we adopted laws on renewable energy use and public-private cooperation to lay the legal and regulatory foundations for speeding up renewable energy projects.

In August the same year, the Uzbek government adopted a presidential decree on raising the share of power production from renewable energy to at least 25% by 2030. To achieve this goal, Uzbekistan will build facilities for new energy development for 5 gigawatts (GW) of solar, 3 GW of wind power and 1.9 GW of hydroelectric power for a combined scale of about 10 GW.

– In 1993, Uzbekistan proposed to the U.N. General Assembly the creation of a nuclear-free zone in Central Asia. How does Tashkent see the peace process on the Korean Peninsula?

Since achieving independence, Uzbekistan has been striving to pursue the common interest, future and regional security of all people in Central Asia based on humanitarianism and the spirit of peace. The priority task of our diplomatic policy is maintaining and bolstering peace and stability in Central Asia while transforming the region into a peace zone conducive to sustainable development. Our proposal of creating a nuclear-free zone in Central Asia received wide support from the international community. For the first time since the U.N.’s foundation, the world’s five nuclear powers — the U.S., the U.K., France, China and Russia – in May 2014 unanimously approved of and signed the Treaty on a Nuclear-Weapon-Free Zone in Central Asia. Thanks to this commitment, Uzbekistan greatly contributed to strengthening regional security and international disarmament and non-proliferation.

On the peace process on the Korean Peninsula, Uzbekistan strongly supports President Moon’s policy toward North Korea, which is designed to resolve North Korean issues and guarantee peace and security on the peninsula. As a country that proposed the nuclear-free zone in Central Asia, we hope that the denuclearization of the peninsula, which will promote the development of inter-Korean ties and regional integration, will come quickly. 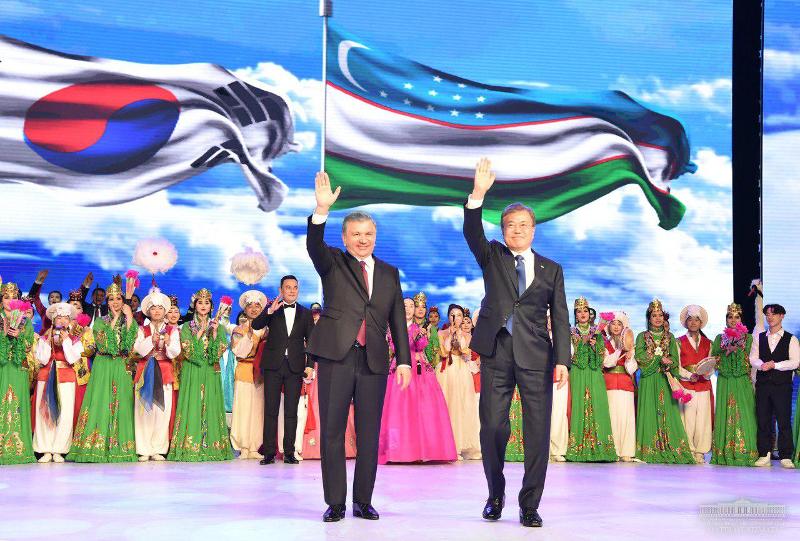 Korea and Uzbekistan have boosted cooperation since upgrading their bilateral ties in 2019 to the level of a “special strategic partnership.” The photo shows President Moon Jae-in (right) and Uzbek President Shavkat Mirziyoyev in April 2019 waving to the crowd at a cultural festival in Tashkent during President Moon’s state visit to Uzbekistan. (Website of the President of Uzbekistan) 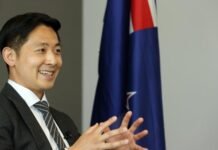 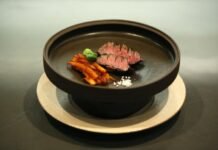 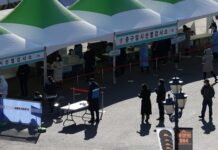 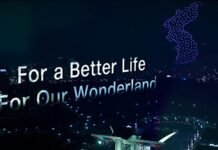 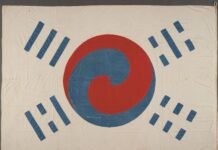 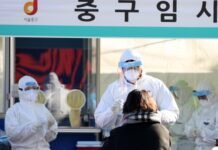