People perform some nongak farmers’ music in 1993 in front of a large daljip bonfire (달집) on the night of Jeongwol Daeboreum, the first full moon of the lunar year. A large flag hanging on the bonfire says that, ‘Farmers are the great foundation of the world.’ In a traditional, agrarian Korea, people lit the straw structure on fire to remove any misfortune and to wish for a good harvest.

A year of abundance, peace and health is what everyone wishes for, throughout the centuries.
On the first full moon of the lunar year, people enjoyed folk games and performed other ceremonies, while wishing good luck for themselves, their family, their neighbors and their country.

On its website on Feb. 10, the National Archives of Korea unveiled a total of 39 records, including photos and videos, related to Jeongwol Daeboreum, the fifteenth day of the first lunar month. These records show what the folk customs and games performed to mark the day looked like. They also show that people today continue to enjoy a similar festive mood, games and customs, just as people did in the past. 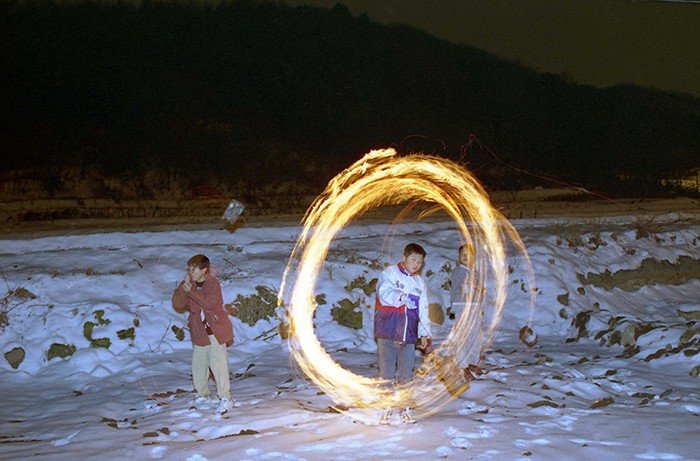 Kids enjoy a jwibulnori (쥐불놀이), a bundle of dried grass tied to a string and set on fire, on the night of Jeongwol Daeboreum in 1998. This folk game was used to help burn the fields and to remove mice and harmful insects from the farms before seeding, all in the hopes of having a good harvest.

In the early morning, people begin the day by drinking gwibalguisul (귀밝이술), a special liquor that is said to give them better hearing. Another representative food on the day is bureom (부럼), which means to crack hard-shelled nuts, such as peanuts or walnuts, with one’s teeth in order to prevent any skin disease in the new year.

Also on the day, people enjoyed and shared ogokbap five-grain rice (오곡밥) and jinchaesik fried vegetables with their neighbors, both of which are considered healthy food items.

In order to have peace across the neighborhood, villagers would gather for the jisinbapgi (지신밟기), a rite performed to salute the god of the land who protects the villagers’ houses, by visiting each other at home. 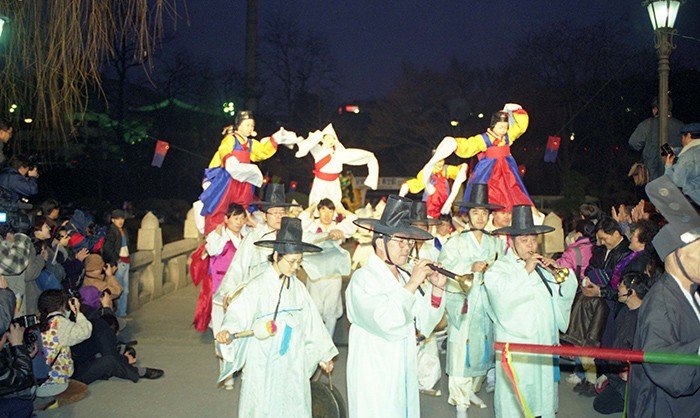 On the day of Jeongwol Daeboreum, people perform the daribapgi ritual (다리밟기) in a wish to have healthy and strong legs. The photo shows the ritual as it took place in 1995, the year of the pig.

At night, people would make wishes while enjoying the full moon. Children enjoyed the jwibulnori which helped to get rid of mice and insects. Villagers burnt a large bonfire called a daljip, which literally means “moon house,” to get rid of evil spirits and in the hope for a good harvest.

Folk games on Jeongwol Daeboreum even went beyond the village.

People have enjoyed games for centuries. These games were designed to boost cooperation among villagers and to foster a community spirit by competing against other neighboring villages. Some of the games include the Andong chajeonnori (안동 차전놀이), the Gwangju gossaumnori (광주 고싸움놀이) and the Tongyeong ogwangdaenori (통영 오광대놀이), all of which people conducted during the off season in the first month of the lunar year.

More information is available at the website of the National Archives of Korea (www.archives.go.kr). The chajeonnori from Andong, Gyeongsangbuk-do Province, is performed in 1968. This is a folk game that people used to play in Andong on the Jeongwol Daeboreum. The Gwangju gossaumnori is performed in 1976. This is a folk game that used to be played in Jeollanam-do Province on Jeongwol Daeboreum.