Sports in Korea are supported by two broad pillars: sports for the common person and then elite sports.

As sports for everyone are directly connected to the citizens’ health and well-being, elite sports play a major role in promoting Korea around the world and creating friendly ties with other members of the international community.

The Taereung, Taebaek and Jincheon national training centers are the three facilities where athletes with great potential are chosen and trained. The Taereung National Training Center, the first sports center, was constructed in eastern Seoul in 1966. Since that time, it has greatly contributed to national development by producing the first generation of modern Korean athletes. However, as time passed, expansion at the facility became inevitable due to the diversification of events and the growing population of athletes. So the Taebaek National Training Center was built in the mountains of Gangwon-do Province in 1998 specializing in highland training.

Finally, the Jincheon National Training Center is the most recent one and it was constructed in 2011. The Jincheon National Training Center is expected to be the cradle of Korean elite sports in the 21st century.

Located in Gwanghyewon-myeon, Jincheon-gun County, Chungcheongbuk-do Province, the Jincheon National Training Center is about a 90-minute drive southwest of Seoul. Some 350 athletes in twelve different events, including track and field, shooting, swimming, volleyball, rowing and more, train at the 85,000-square-meter site. As the second phase of construction is set to be completed in September 2017, the center will become one of the world’s biggest sports complexes, as it will cover 37 different events and be able to house up to 1,115 athletes. Korea.net recently visited the center, and the weather dipped below minus 10 C there on Jan. 27.

Compared to the cramped environs at the Taereung center, the enlarged Jincheon National Training Center provides a wide range of facilities where athletes can make their own schedule, depending on their pace and condition. At the indoor shooting range, there are 60 shooting stations ready for athletes to practice the 10 meter, 25 meter and 50 meter pistol events. 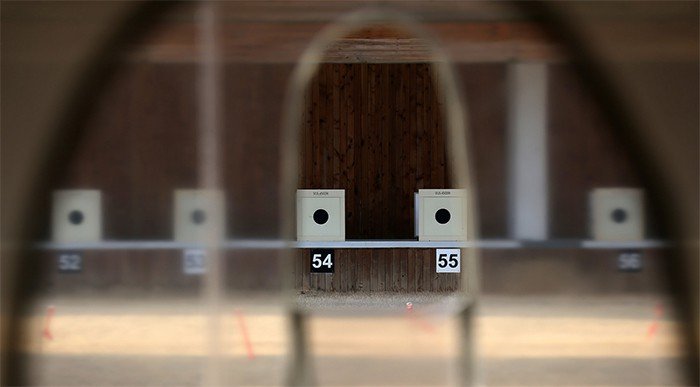 Athletes have access to an indoor 50 meter pistol shooting range. 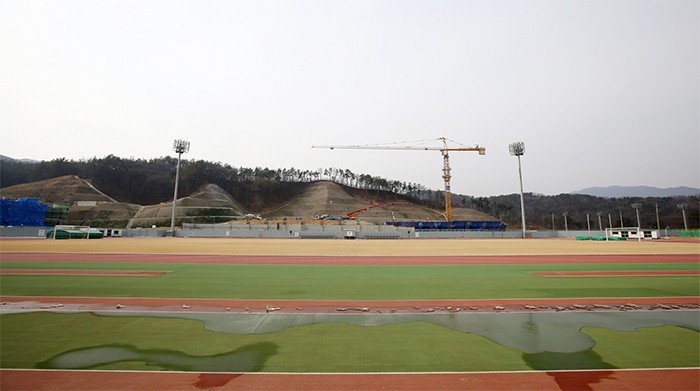 The 400 meter track has 6 lanes and soccer or rugby can be played on the inner field. The swimming center has 3 different pools: race lanes, a diving pool and then a water polo and synchronized swimming pool. Athletes specializing in different events can train without worrying about the time, since they now each have their own swimming pool. There are 10 racing lanes in the Olympic-sized main swimming pool. 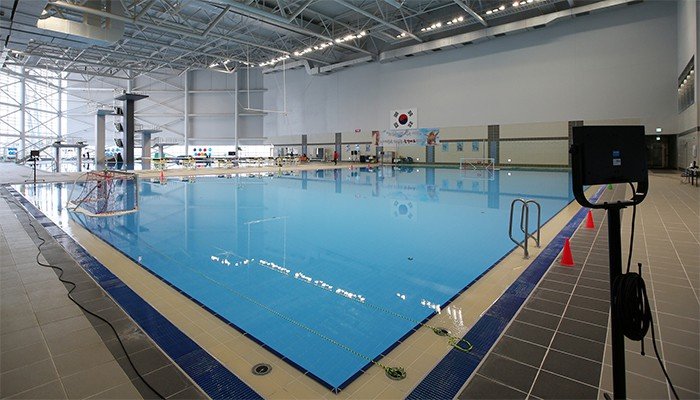 The swimming center includes both a diving pool and a separate pool for both water polo and synchronized swimming.

Older training facilities concentrated on larger Olympic events, particularly ones where many medals were up for grabs. With the newly enlarged complex, however, it’s now possible for athletes in all events to train under world-class conditions, with no worry about conflict or scheduling.

The indoor gym is usually used in events such as volleyball, basketball and handball. However, the multi-gym at the Jincheon center can now also be used by the pole vault team. By installing a track and mat inside the gymnasium, pole jumpers are now able to train in a climate-controlled environment. 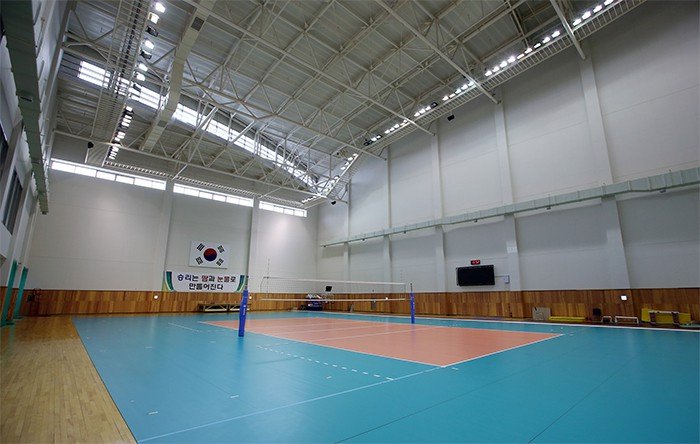 The multi-gym is used for volleyball, basketball and handball. A track and mat have also been installed along the side for use by the pole vault team. 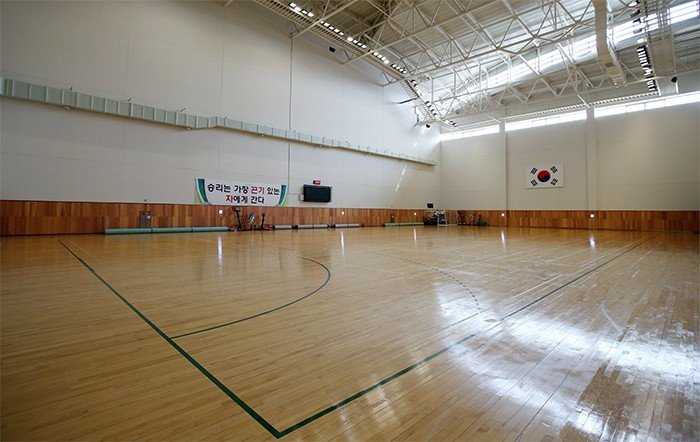 There’s a basketball court at the multi-gym, part of the new Jincheon National Training Center.

Besides the training facilities, there’s also a visitor’s center, the Partner House, administrative offices, a weight training center, an athlete’s center and the Hwarang Dormitory, all housed on the complex. 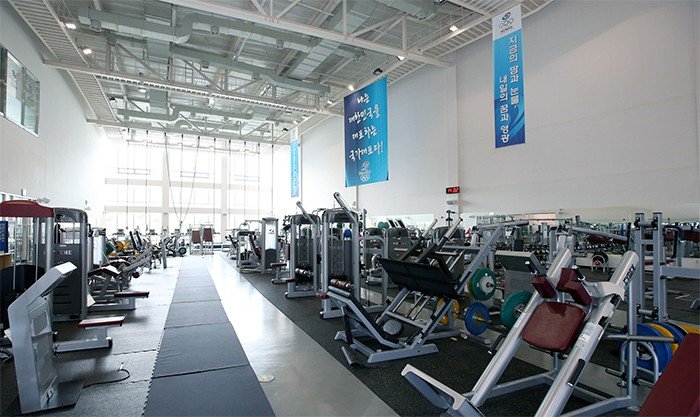 The Jincheon National Training Center is home to a world-class weight training center. Athletes train hard for the upcoming Rio 2016 Olympics at the weight training center. The administrative offices, swimming center, multi-gym and athlete’s center are connected via the main building at the Jincheon National Training Center. The Hwarang Dormitory allows athletes to both train and live at the sports complex.

The Hwarang Dormitory has a lounge in the lobby.

At the athlete’s center, there’s a library, a multimedia room, a theater, a singing room, table tennis, billiards and general meeting rooms. The center has a library ready for the athletes to use. The center has singing rooms where the athletes can unwind. 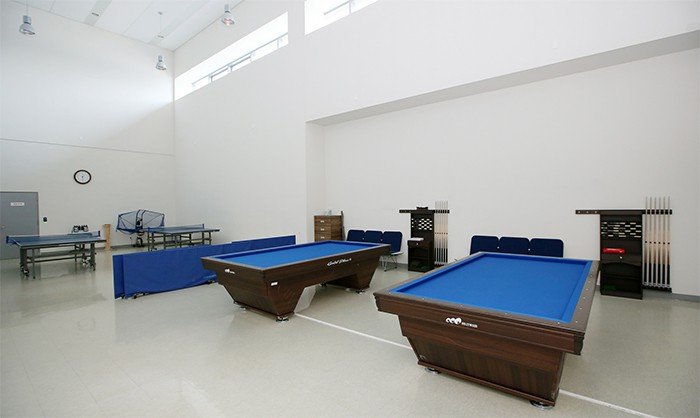 There are table tennis tables and billiard tables at the center. The center houses a theater where athletes can convene to enjoy a film.

The Jincheon National Training Center is not only one of the largest Olympic training centers in the world, but its facilities are also updated every year.

Lee Je-hoon, a physical therapist at the medical center there, said, “Including our four specialist, there are around 30 medical professionals who will soon be joining our medical center. Our medical center itself can be regarded as a semi-general hospital, since the athletes can receive therapy, rehabilitation and be proscribed simple medical treatments all within the national center, without leaving.”

A velodrome is under construction at the Jincheon National Training Center. 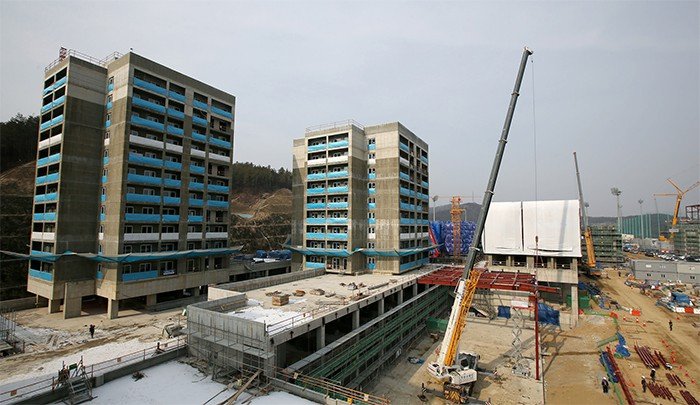 More dormitories are under construction at the Jincheon National Training Center. By 2017, the facility will be able to accommodate 1,115 athletes.