Korean bobsledders have successfully finished the 2015-2016 season and they couldn’t have wished for better results.

The Korean bobsled pair Won Yun-jong and Seo Young-woo led the good news by securing the top place in the world and winning the gold medal in the final at the International Bobsleigh & Skeleton Federation (IBSF) World Cup. This is the first time that the top place was taken by Asian athletes. 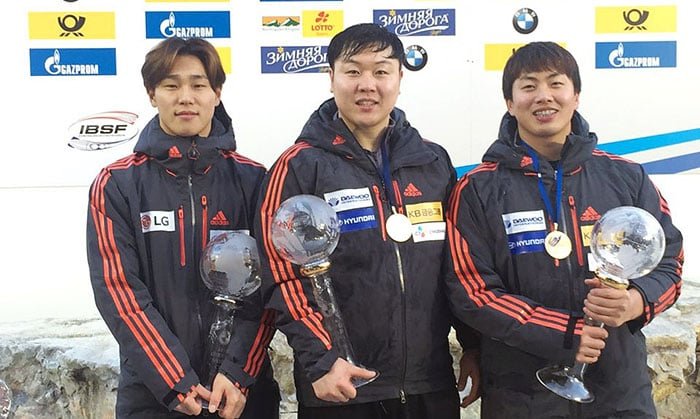 It took six years for Won and Seo to get to the top with two gold medals and three bonzes, ever since the two began bobsledding. They already won gold at the bobsled World Cup at Koenigssee, Germany, on Feb. 28, with a total time of 1 minute and 39 seconds.

Won said, “This year’s season has ended. I guess it will be an unforgettable season. I would like to thank everyone from the bottom of my heart. I still believe I need to make some improvements in our start. I will concentrate on my training to reduce our time at the start.”

President Park Geun-hye encouraged the athletes by sending via telegram a congratulatory message. She said, “I would like to congratulate you on winning the first-ever victory in the history of Korean bobsledding at the IBSF. It is so meaningful to take pride in winning the World Cup, as the achievements you made through your passion and effort are now the first-ever victory for not only Korea, but also for the whole of Asia.“

“I hope you can work together further so that in the future you can play a great role in the development of Korean winter sports,” she added.

Skeleton racer Yun Sung-bin rockets downward during a race at the ISFBF. Yun won the silver medal at the ISBF for the first time.

A day earlier, skeleton racer Yun Sung-bin won a silver medal with a time of 1 minute and 41.38 seconds. At the eight World Cup meets this season, Yun won one gold medal, three silver medals and two bronzes. He also won a silver medal at the ISBF World Cup. Yun is ranked second-place in the world after Martins Dukurs of Latvia, with 1,562 points.

Yun said, “I’m so happy to finish this year’s season with good results. I’ll keep training in Pyeongchang so that I can put on a good performance at the PyeongChang Winter Olympics.”

Yun also received a congratulatory telegram from President Park. In the message, she said, “Congratulations on winning second place at the ISBF World Cup and becoming the first Korean to have ever won with such results. The citizens and I are all delighted by the splendid results you made, despite all the difficulties.”

Meanwhile, rhythmic gymnast Son Yeon-jae also won a gold medal in this season’s first World Cup competition. In Espoo, Finland, Son won her gold medal in ball, and also got a silver medal in the individual all-around. She also won a silver medal in ribbon and a bronze medal in hoop. With a score of 73.550 points, Son has now set a new personal record twice in a row after the Grand Prix 2016 in Moscow earlier this month.