Children on June 23 pose for photos at a promotional booth in New York’s Time Square with Soohorang the white tiger and Bandabi the Asiatic black bear, the two mascots of the PyeongChang 2018 Winter Olympics and Paralympics. (Korea Tourism Organization)

Efforts to vigorously promote the PyeongChang 2018 Winter Olympics and Paralympics in the U.S. are being stepped up 225 days ahead of the grand event.

People at the two venues got previews of the games by experiencing ski jumping, a major winter sport, via virtual reality (VR) machines and took pictures with the event’s two mascots, Soohorang the white tiger and Bandabi the Asiatic black bear.

The booths were a part of the annual Korea Festival co-hosted by the Korean Ministry of Culture, Sports and Tourism, Korea Tourism Organization, the PyeongChang Organizing Committee and Gangwon-do Province to promote Korean sports, food and tourism in New York and New Jersey. 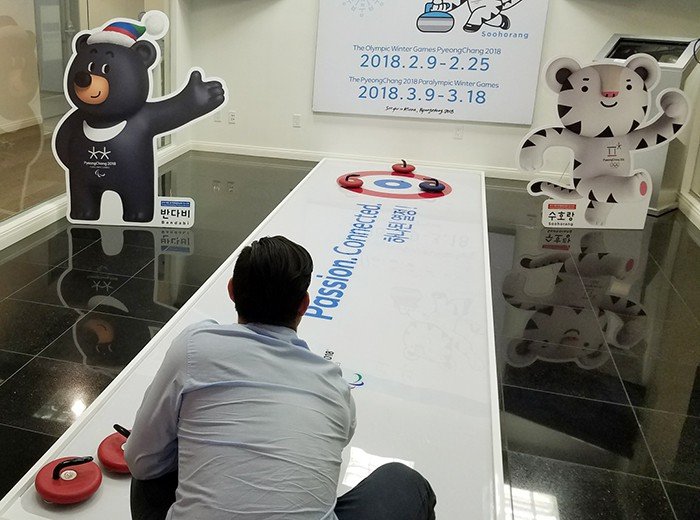 A hall for promoting the PyeongChang Olympics was also opened on June 24 at the Korean Culture Center in Los Angeles.

The hall is divided into three sections. The video zone plays promotional videos about the Winter Olympics; the photo zone allows visitors to take pictures with the two adorable mascots; and the experience zone offers sky jumping on a VR machine or curling.

“The promotional hall is designed to attract the interest of locals in the PyeongChang Winter Olympics and Paralympics and let them learn more about the event,” said Kim Nakjung, director of the Korean Culture Center in Los Angeles. “We will further promote the upcoming Winter Olympics together with the Korean Consulate General and Korea Tourism Organization office in LA.”