The PyeongChang 2018 Paralympic Winter Games run from March 9 to 18. Bandabi the Asian black bear is the official mascot for the Games. Pictured is a press conference at the Gangwon Media Center on Feb. 22 about the Christmas in March festival that will feature cultural programs during the Paralympic Games. (Kim Sunjoo)

The moments of joy and tears that the world shared at the PyeongChang 2018 Olympic Winter Games will continue in the upcoming Paralympic Games.

The PyeongChang 2018 Paralympic Winter Games, a sports festival for para athletes and sport fans alike, will kick off on March 9 and run until March 18, sharing with the world once again touching moments as athletes challenge the limitations of human ability.

As in the Olympic Games, the Paralympic Games will be held in Pyeongchang, Gangneung and Jeongseon across Gangwon-do Province, under the same slogan of “Passion. Connected.”

Around 1,700 people will take part in this year’s Paralympics, consisting of 570 athletes from 49 countries. They’ll be competing for medals in a total of 80 events across six disciplines: alpine skiing, biathlon, cross-country skiing, ice sled hockey, snowboarding and wheelchair curling. North Korea, too, will send a team, a first in Paralympic history.

The biathlon and cross-country skiing events will take place at the Alpensia Biathlon Center in Pyeongchang, while the ice sled hockey and wheelchair curling will be held at the Gangneung Hockey Center and Curling Center, both in Gangneung. The Jeongseon Alpine Center in Jeongseon will host the alpine skiing and snowboarding.

Team Korea, with 36 para athletes, will compete in all six disciplines with the goal of winning one gold, one silver and two bronze medals. The host country hopes to finish in the top-10 in the final medal standings.

“Now is the time for the Paralympic Games,” wrote President Moon Jae-in on his official Facebook profile on Feb. 25. “The Olympic flame that has let everyone shine will continue to shine for the challenges to be faced by the Paralympians with the same amount of brightness and warmth.” 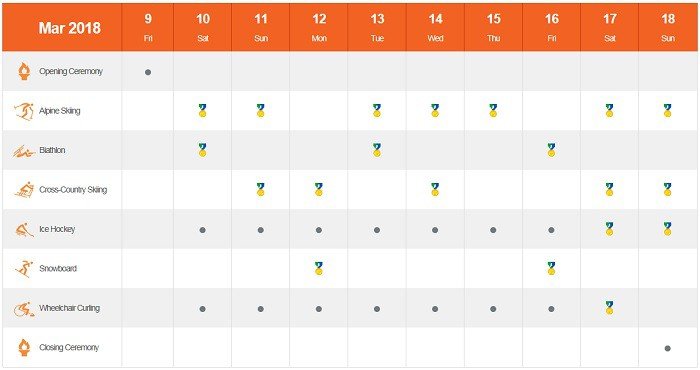 Athletes at the PyeongChang 2018 Paralympic Winter Games will compete in 80 events across a total of six disciplines. (PyeongChang Organizing Committee)