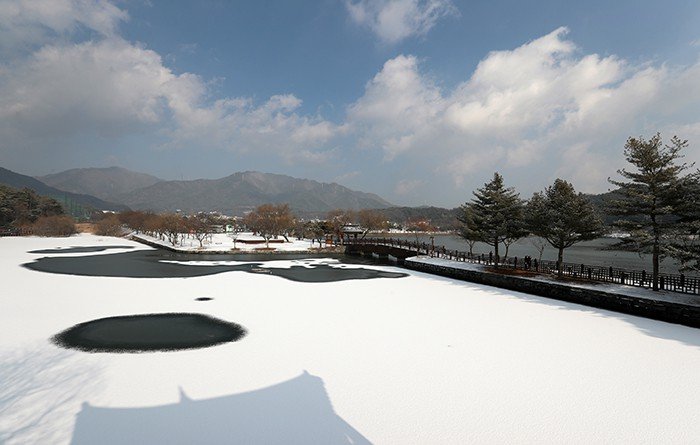 The Uirimji Reservoir (의림지, 義林池), made during the reign of King Jinheung (진흥왕, 眞興王) (r. 526-576), the 24th Silla ruler, still supplies water to nearby farmlands. It’s also a frequented esplanade for locals and tourists alike.

“It’s a place with clear water, beautiful mountains and a whole bunch of things to do,” said Kim Dong Hak, the tourism and leisure director in Jecheon, by way of introducing the city.

The clean waters of the Uirimji Reservoir and Cheongpungho Lake reflect the sky and the Woraksan, Sobaeksan and Chiaksan mountains, surrounding the city with green. In Jecheon, people can enjoy leisure activities like paragliding, kayaking and a zip-line, while appreciating the landscape at the same time. The trees around the Uirimji Reservoir look like a scene from a traditional Korean painting when they’re covered in snow.

According to legend, it was first made by Ureuk (우륵, 于勒), a musician who was active during the time of King Jinheung (진흥왕, 眞興王) (r. 526-576), the 24th Silla monarch. It’s the oldest man-made lake that survives in Korea.

The reservoir’s circumference is 1.8 kilometers and its depth is 13.5 meters. The water is surrounded by some 200 pine trees that are 200- to 300-years-old. From the three pavilions along the waterside — Yeonghojeong, Gyeonghoru and Ureukjeong pavillions — different scenes of Uirimji can be observed. Sunset over Cheongpungho Lake, as seen from a boat, is just like the view of a sunset on the shores of the Yellow Sea.

Jecheon’s clean water can be enjoyed on a large scale at Cheongpungho Lake.

Cheongpungho Lake was formed 1,500 years after the Uirimji Reservoir was made due to the construction of the Chungju Dam in 1985. Thanks to its width, it’s called Korea’s “inland sea.” The Chungpung Cultural Heritage Complex, the Chungpungho Tourist Monorail, bungee jumps and paragliding facilities are all collected near the lake. The scenic sight of Cheongpungho Lake seen from a pleasure boat is most-recommended to those who are tired from their busy urban life.

Canoeing and kayaking are available near the Oksundaegyo Bridge at Cheongpungho Lake. At Gyodong Minhwa Village, 80 minhwa folk paintings (민화) grouped into seven themes decorate the town. The tiger in the photo above is one of the symbols of the village.

Tourism in Jecheon is more than just sight-seeing.

The Gyodong Minhwa Village is a tiny town near the Jecheon Hyanggyo Confucian School (제천향교). The school was established during the reign of Goryeo’s final ruler, King Gongyang (공양왕, 恭讓王) (r, 1389~1392). The village itself is another must-see in Jecheon. From 2009, local artists came together to paint the old town, turning it into the colorful tourist site of today. The paintings have seven themes: scholastic achievement, long life, eternity, recollection, hope, success and winning first place. Craftwork related to folk paintings are sold in the handicraft workshops run by the villagers. Visitors can also make their own minwha fans, make their own works of pottery, or bake minwha-inspired cookies.

Jecheon, located in the north of Chungcheongbuk-do Province, offers various activities thanks to the surrounding Sobaeksan and Chiaksan mountains and to Cheongpungho Lake.