A replica of Seoul’s Bongchon-dong hillside village at Suncheon’s outdoor film studio shows what life was like in Seoul in the ’80s. Students walk around the film set taking photos

At the Suncheon Open Film Location, a giant outdoor film studio at Suncheon, Jeollanam-do Province, visitors can get a glance of Korea from the 1960s to the 1980s.

Suncheon’s outdoor film studio is composed of three themed sections: a 1960s remake of old town Suncheon, a 1970s replica of Seoul’s Bongchon-dong hillside village, and a 1980s Seoul suburb. These three sets bring back memories and images that have been forgotten for nearly 50 years.

The Suncheon Open Film Location was first created in 2006 in order to film the soap opera “Love and Ambition” and has since become a popular tourist site. The outdoor studio is packed with people, especially from the younger generations.

On a chilly weekday in late February, the minute you enter the outdoor studio you can see many students walking around taking photos, dressed in rented ’70s or ’80s school uniforms, styles that were once worn by their parents.

Even though all the old school uniforms are basically the same, with the same pattern and color, they still aren’t standardized, as the young tourists have boundless energy through which they express their individuality. After waiting in the long line to get onto the set of a 1980s Seoul and after finally donning their rented ’80s school uniforms, they’re led to the GoGo disco, with music blaring all across the outdoor studio. Most likely having no clue as to who the artists are or what’s the name of the newly encountered songs, the people just smile and dance along to the exciting rhythm, just as their parents once did.

On a weekday, people stand in line at the Suncheon Open Film Location to rent an old-style school uniform. 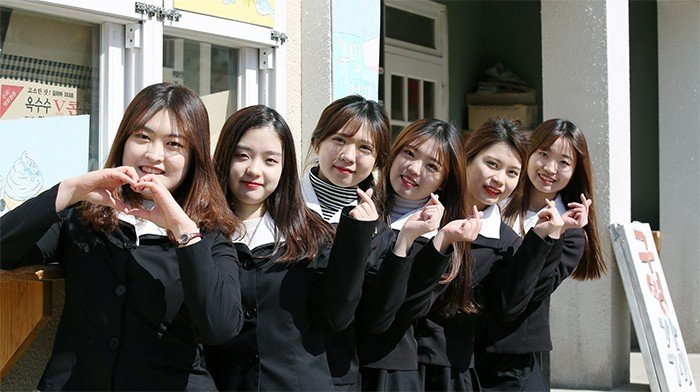 Students visiting Suncheon’s outdoor film studio change into old school uniforms, a style once worn by their parents, and pose for a photo. As many people dress in rented 1980s school uniforms, it feels like you’ve gone 30 years back at Suncheon’s outdoor film studio.

Lee Sang-man, head of the Suncheon Tourism Promotion Department, said, “The film studio has become a well-known tourist attraction. Around 3,000 people visit on most weekdays and 5,000 people on the weekends. During the peak season, the number reaches to 8,000. Some 200 people can rent a school uniform at the same time. Kids can change into an old school uniform, a style once worn by their parents, and walk around the old streets. They talk about the past with their parents, so the film set works as a place where communication can take place between the generations.”

The visitors then head to the replica Bongchon-dong hillside village. The houses placed between the narrow alleys above the low hill lay bare the historical evidence. By entering any one of the houses placed on the hillside set, the view of Suncheon’s modern apartments can be seen from the window, connecting the past and the future. 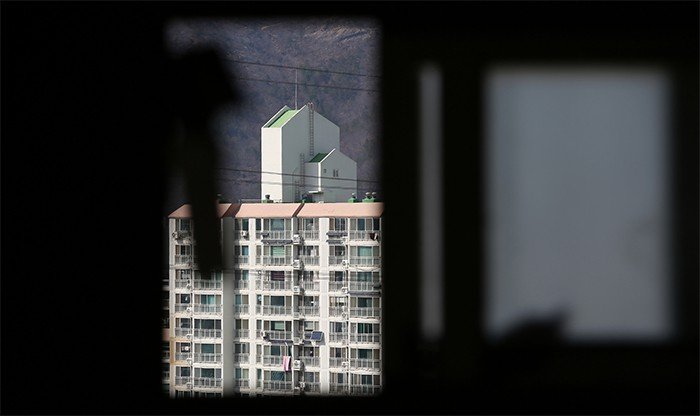 The view of modern apartments, as seen through one of the buildings on the film set, connects the past and the present.

The outdoor studio also has a section made up to look like old Suncheon.

After exploring the hillside village, before you know it the steps lead to the section of the outdoor studio where there’s a replica of the old town of Suncheon. The buildings, with the Okcheon-gun Stream running in between, give visitors the chance to look back on the hard times that Korea faced after the Korean War (1950-1953). As you walk through the buildings, there are many snacks, still loved by people today, that stop visitors in their tracks, such as eomuk, or fish cake, tteokbokki, or stir-fried rice cake in a pepper sauce, pupa, pajeon, or savory pancakes, and dalgona, or old fashioned sugar candy.

For more information about the Suncheon Open Film Location, please visit the website below:
http://tours.suncheon.go.kr/tour/thema/0003/0007/0001/ Posing as if in a scene from a movie, a couple in 1980s school uniforms smiles for the camera on the Bongchon-dong set. Visitors wear rented ’80s school uniforms and pose for a photo in front of the Sunyang Theater, a location that often appeared in the soap opera ‘Lights and Shadows’ (2011).