Home Magazine Travel Surround yourself with nature on Daebudo Island The Gubongdo Sunset Observatory is the highlight of Daebudo Haesolgil trail No. 1. This spot is best known for its sunsets, where one can feel the true beauty of the Yellow Sea.

People walk along the beach and mudflats that appear at low tide.
As they walk, they are absorbed by the beautiful scenery of the sky and the sea.
They can learn how to naturally produce salt from the old salt ponds or catch seashells and crabs in the mud.
You can do all this, and more, on Daebudo Island, a nearby offshore island that is still easily accessible via public transport, such as subways and buses.

Daebudo Island is part of Ansan City in Gyeonggi-do Province. It is an official ecotourism destination as designated by the Ministry of Environment. The island has everything a visitor would want, from attractions to see, eateries to sample and memorable events to enjoy, all of which draws a lot of visitors these days.

The network of Daebudo Haesolgil walking trails is one of the must-see travel destinations of the island. This long walking trail is formed naturally along the coastline of the island. It got its new name, Daebudo Haesolgil, in 2012 and went viral among walking and hiking tourists. It has recently been gaining even more popularity, especially among weekend travelers, thanks to its easy access to the capital. It is a 74-kilometer seven-part walking trail. The individual sections of the trail aren’t too steep or too physically challenging, so all family members, both young and old, can enjoy the outdoors. Visitors to Daebudo Island walk along the spit that connects Tando and Nue islands. However, they can only walk this path twice a day during low tide. In peak tourist season, as many as 4,000 visitors walk along the sand bar every day. 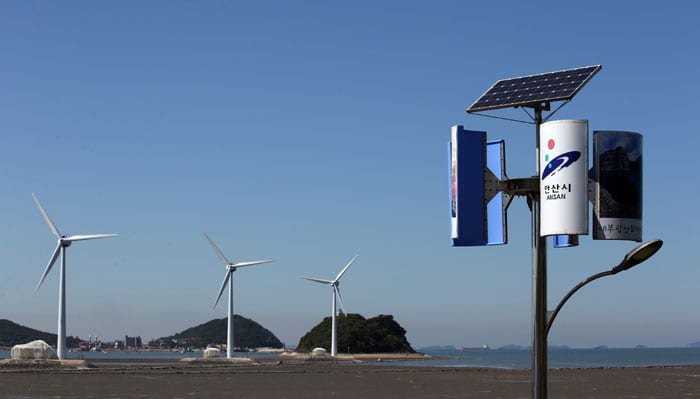 Daebudo Island is an ecotourism destination where people can feel and experience nature without changing or destroying it. Being close to large metropolitan areas, many people visit the island. In the photo, both solar and wind power are used to operate the streetlights. Electrical facilities using wind power and tidal power can be found across the island. 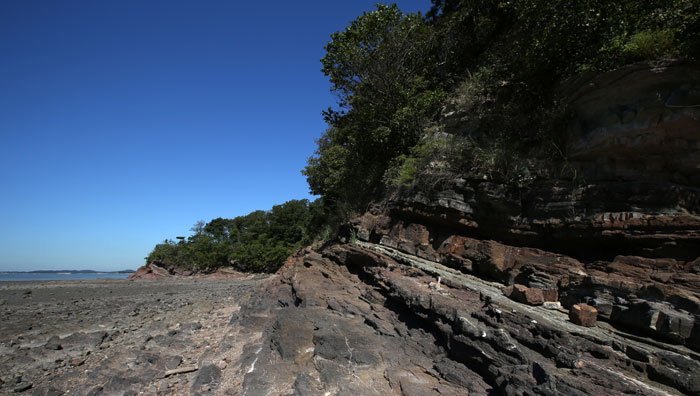 In 2013, archeologists began eyeing the sedimentary layers found between Tando and Buldo islands, part of Haesolgil walking trail No. 6, as it was found to have been formed during the Cretaceous Period.

At the Tando Observatory, visitors can see the true characteristics of Daebudo Island along the Haesolgil walking trails. It is at the end of trail No. 6 and at the starting point of trail No. 7. The change in tide can be as high as 9 meters on the Yellow Sea. When at low tide, visitors can see the seabed and the sedimentary layers that reflect the passage of time, both of which are part of must-see attractions here.

The seabed can be seen twice per day at low tide. The spit links two nearby islands, Tando and Nue islands. It takes about one hour to get to Nue from Tando. On Nue Island, you can also look around the Nue Island Lighthouse Observatory. During peak season, about 4,000 people visit here every day. Sedimentary strata underneath the Tando Observatory drew much attention from academics in 2013 when the layers were found to have been formed in the Cretaceous Period. 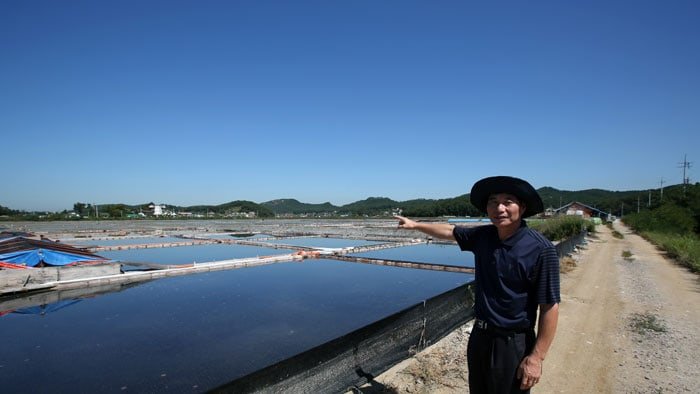 Chung Hong-sup, from the tourism promotion department in Ansan City, explains how to produce salt in a natural, environmentally-friendly manner using sea water that flows across the island through the mudflats. 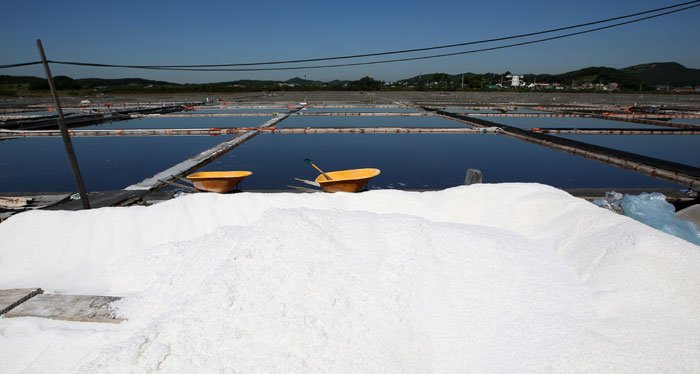 Newly produced, white salt from the salt ponds is gathered to one side. 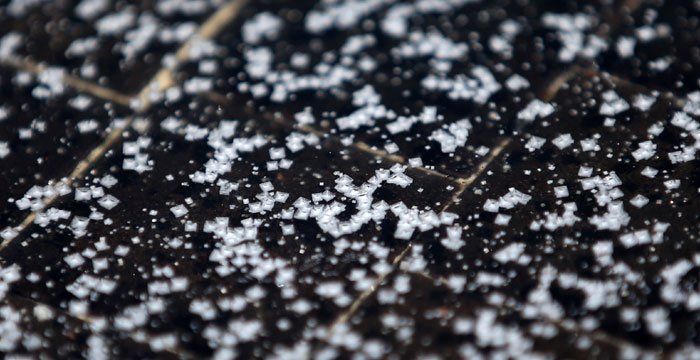 Cubic, crystallized salt is produced in the final stages of the salt-producing process.

On Daebudo Island, visitors can enjoy the unique experience of producing sun-dried salt in a traditional, natural way. At the Dongju salt ponds on Daebudo Island, seawater flows across the island through the mudflats and is used to produce salt. Chung Hong Sup, from the tourism promotion department in Ansan City, said, “This salt pond used to be bigger before the water course along the island was closed in by the seawall and by reclamation projects. Here in this pond, you can enjoy various experiences, such as salt producing and soap making with naturally produced, sun-dried salt.” Visitors along Daebudo Haesolgil walking trail No. 1 can get around conveniently by bus along the Gubongdo Gaemiheori Bridge that links to the sunset observatory.

If you want to fully appreciate the charms of the sea and the woods of Daebudo Island, head to trail No. 1 of the Daebudo Haesolgil. This trail is located at the entrance to Daebudo Island and can be found after going along the Sihwa Seawall. By following the trail, travelers can walk along the seashore and ascend the low Bungmangsan Mountain where they can see a view that stretches to Yeongjongdo Island, the Incheon Bridge, Songdo New City and Sihwaho Lake.

When walking along the Gaemiheori Bridge that connects to Gubongdo Island, travelers can find a forest trail. The name of this bridge literally means “the waist of an ant,” as it links the two islets and is shaped like the waist of an ant. After crossing the bridge, enjoy the sea breeze and the sound of the waves. The trail leads you to an observatory. This is the Gubongdo Sunset Observatory. On the weekends, the observatory is particularly crowded with visitors enjoying the sunset reflecting on the piece of installation art that’s shaped like a horizon embracing the sun.

To enjoy travelling slowly and to rest a moment, stay a little longer on Gubongdo Island. You can appreciate the picturesque view decorated by a blue sky and crystal clear water on the island’s beaches, as it is quite different from a typical view of the Yellow Sea, usually covered with mudflats. This spot is quite popular among fishing advocates. The island receives more visitors these days thanks to its newly-built accommodations and restaurants. 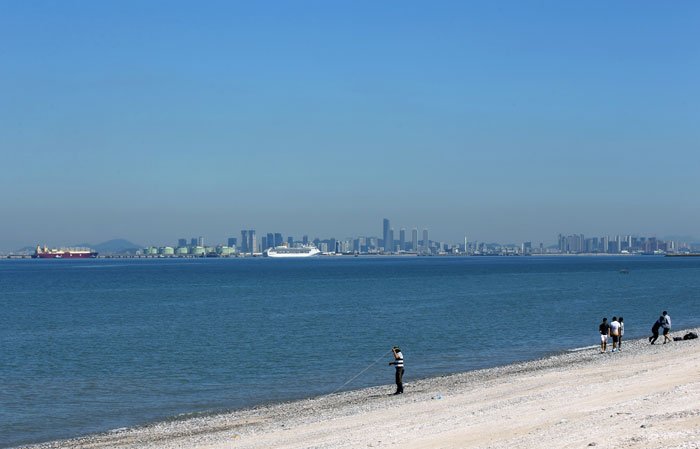 From the beach on Gubongdo Island, on a clear day you can see as far as Songdo, the Incheon New Port and Yeongjongdo Island. 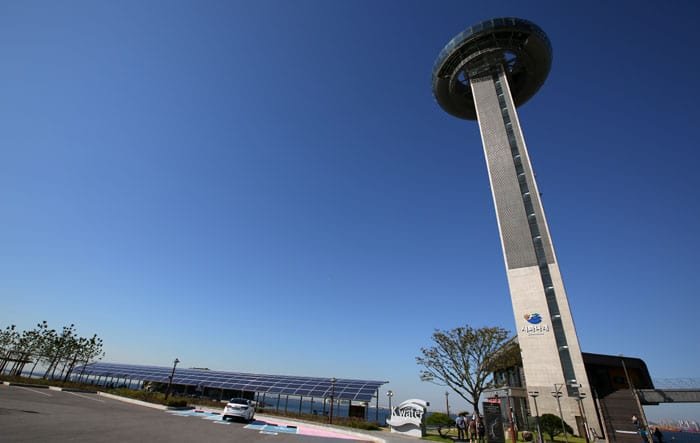 The Sihwa Tidal Power Plant and the Sihwa Narae Observatory are on Daebudo Island.

Another unmissable attraction on Daebudo Island is the Sihwa Narae Obsevatory. This 79-meter observatory is free to the public and is so popular that approximately 10,000 people visit every day.

More information about the island is available at Ansan City’s homepage (http://www.iansan.net) or at the Korea Tourism Organization (http://english.visitkorea.or.kr). The Sihwa Tidal Power Plant can be seen from the Sihwa Narae Observatory. Noodle soup with fresh seafood, or haemul kalguksu, is one of the best-known delicacies on Daebudo Island. 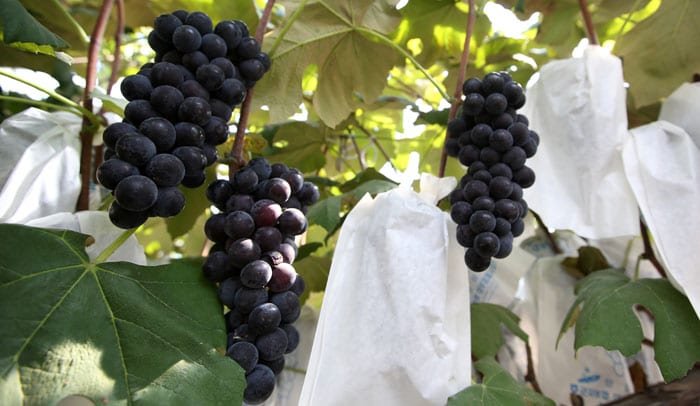 Daebudo Island is known for its concord grapes. Each year, the island hosts a grape festival. This year’s festival was held on Sept. 12 and 13.