Home Magazine People ‘Iksan, a city that benefits the people’ Mayor of Iksan City Park Kyung-Chul emphasizes that the city must be beneficial to the people, saying that Iksan was a capital city four times in ancient Korea.

“Iksan is a city that benefits the people.”
This is the definition of Iksan, according to Iksan City Mayor Park Kyung-Chul.

The concept of benefiting the people is reflected in the city’s major policies. The Korea National Food Cluster project, which the city is currently carrying out with the central government, is one such policy. There are many catchphrases to promote the project in this regard. Catchphrases spotted around the city say, “The world will eat what Iksan makes,” for example. The project aims to benefit people around the globe by producing top quality food products, including agricultural and marine processed foods, under the best conditions possible. It doesn’t just focus on creating a food industrial complex, but aims to meet the growing demand for food around the world and for food that is healthy and organic.

Mayor Park says, “Iksan was the capital of ancient Mahan more than 2,000 years ago. It is impossible to talk about history in Jeolla-do (North and South Jeolla Provinces) without mentioning Iksan. The city is home to the ancient history of the kingdom of Baekje (18 B.C.-A.D. 660). You can find many more stories about the city, along with news about our various industries and projects, including the Korea National Food Cluster. Iksan is the land of opportunity and unparalleled charm.” 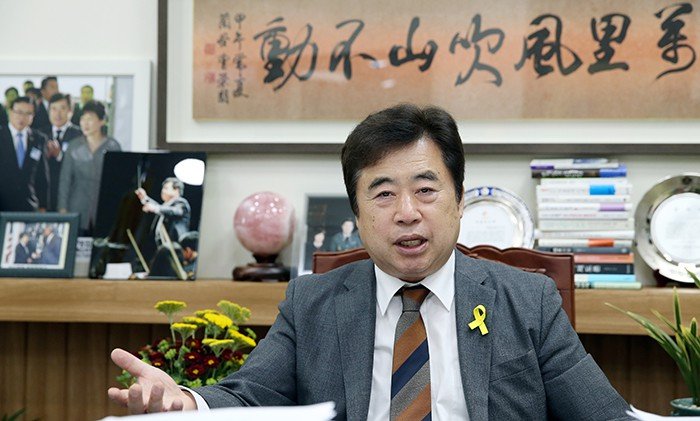 Mayor Park Kyung-Chul of Iksan City explains the history of Iksan, which can be traced back from Gojoseon through to the Daehan Empire (1897-1910).

Mayor Park shared his thoughts with Korea.net about Iksan, a city, he says, that is endlessly renewing itself.

－ Iksan is the home of the ancient Baekje kingdom, represented by the Iksan Wanggungni Historic Site and the site of Mireuksa Temple. May you please introduce the city to us?

Iksan is the one and only city in Korea that has been the capital four times throughout history. Furthermore, King and then Emperor Gojong (r. 1863-1907) named his new country the Daehan Empire, using the “Han” from the name of the confederated three kingdoms of Han — the Three Han States — according to the “Veritable Records of Emperor Gojong” (Gojong Silok, 고종실록, 高宗實錄). This is also reflected in the official name of Korea in Korean: Daehanminguk, or the Republic of Korea. So we can say that Iksan is the birthplace of the name of Korea.

Korea’s first jewelry industrial complex is situated in Iksan. The city is currently building a National Food Cluster. Thanks to the opening of the Honam High Speed Railway, Iksan is becoming the center of Korea’s transport and logistics. This city leads you to expect more from tomorrow. I would say that it is a city of sustainable, future-forward hope.

－ Despite the fact that Iksan is one of the ancient capitals of Baekje, it is less known than other regions of the country, such as Gyeongju, a city known for the ancient kingdom of Silla (57 B.C.-A.D. 935), or other Baekje cities, such as Buyeo or Gongju. What efforts have you been making to promote your city?

Iksan is full of valuable historical and cultural resources, such as the Wanggungni Historic Site and the site of Mireuksa Temple. However, this city hasn’t been in the spotlight much.

One of our slogans is, “Iksan, a green city with a 2,000-year-history of being the capital.” In other words, the goal of the city is to become a city of history and refinement. In this sense, the Mireuksaji Relics Exhibition Museum will be designated as a formal national museum. In July this year, the Wanggungni Historic Site and the Mireuksa Temple site will hopefully be listed on UNESCO’s list of World Heritage sites. 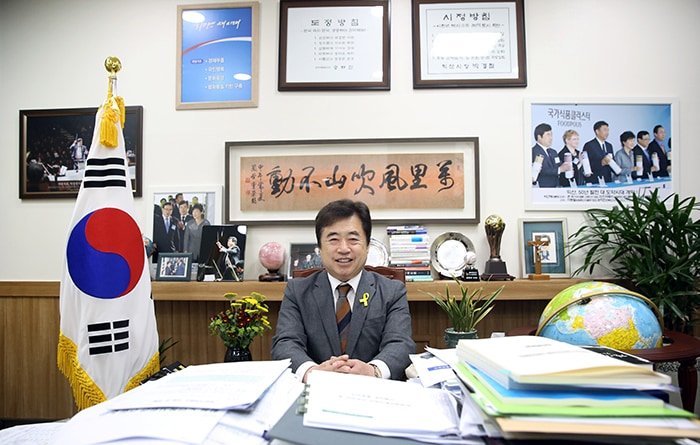 Mayor Park leads a busy work life at a desk stacked with papers and documents. He emphasizes the need to make endless development and reform.

－ Having been chosen as the center of the National Food Cluster, the city has happily adopted the project. What role will the city play in the project’s future?

The slogan of the project is, “The world will eat what Iksan makes.” According to the slogan, the city will respond to the world food market in a future-forward manner. To do so, it will create a business environment that will support world-class research and development facilities and the food industry’s entire production process, including R&D, manufacturing and distribution. Many companies in the food sector expressed their will to move to the cluster. Some international firms have also been investing in the project.

－ The largest jewelry complex in the country was built in Iksan many years ago. The city has been focusing on the jewelry industry. Tell us about the major outcomes you have achieved so far, and your future plans.

The jewelry complex was built in 1975. It continues to make progress today, by exporting jewelry worth more than USD 70 million every year. As the, “city of jewels,” Iksan has been hosting the Iksan Jewelry Expo, a special jewelry festival, since 1989. It built the Iksan Jewelry Museum in 2001.

In 2012, a new jewelry processing complex was built. By 2016, the city will build a design and technology center to support the jewelry industry and rental plants. For the next ten years, we will inject KRW 10 billion to create a jewelry-themed tourist attraction.

－ Iksan has a special brand for its agricultural produce and for other food stuffs from the region, “Iksan Tapmaru.” Can you tell us more about it?

Tapmaru is a combination of “tap” and “maru.” “Tap” means “pagoda” in Korean, which we got from the stone pagoda at Mireuksa Temple. “Maru” means “the peak of the mountain.” With the honor of being a shared brand, 27 enterprises in Iksan produce, distribute and sell a total of 33 items, including varieties of rice, watermelons and tomatoes. When the National Food Cluster is complete, I hope that more people around the globe will easily be able to taste the high quality agricultural produce and regional products of Iksan. Moreover, Iksan has been focusing on acquiring various facilities that can produce halal food for devout Muslims worldwide. 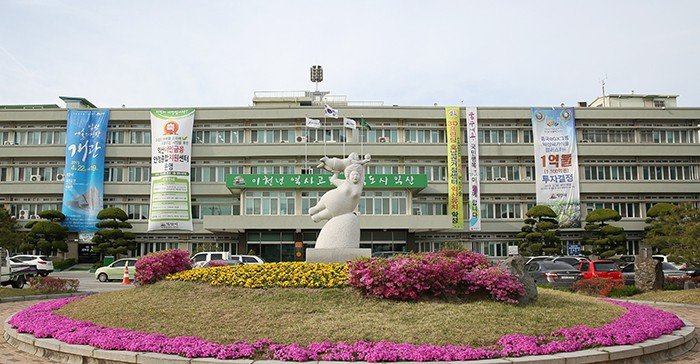 As the future center of the National Food Cluster, Iksan City Hall flies many banners related to the project.

－ What advantages does Iksan offer to foreign direct investors who invest in the city?

－What are some of the must-see places and must-eat foods for international tourists who come to Iksan for the first time?

Firstly, I would say that Mireuksa Temple, once the largest temple in Asia, is a must-see attraction. The five-story stone pagoda at the Wanggungni Historic Site and the Iksan Toseong fortress are also quite impressive.

Apart from the Baekje relics, you can find historical traces of our four main religions in Iksan. One of them is the Nabawi Catholic Church, which was built to mark the return of Andrew Kim Dae-geon (1821-1846), the first Korean Catholic priest, after he was ordained in China. There are also many Buddhist relics, including Mireuksa Temple. People can learn more about the spread of Christianity in Korea and how Confucianism remained in society at the Dudong Church. You can also visit the central headquarters of, and a history museum for, Won Buddhism, a form of Buddhism indigenous to the Korean Peninsula.

As for food, I would strongly recommend tourists taste our Tapmaru rice. It’s the best-quality rice in Korea. The seodongma, or yams grown in Iksan, and our purple-colored sweet potatos are also delicious.

Other recommendations include condiments made from fermented crops grown in Iksan. You will experience the true taste of Korea thanks to these naturally fermented condiments — soy sauce, chili paste and fermented soy bean paste – that have been prepared in 3,500 large traditional vessels.