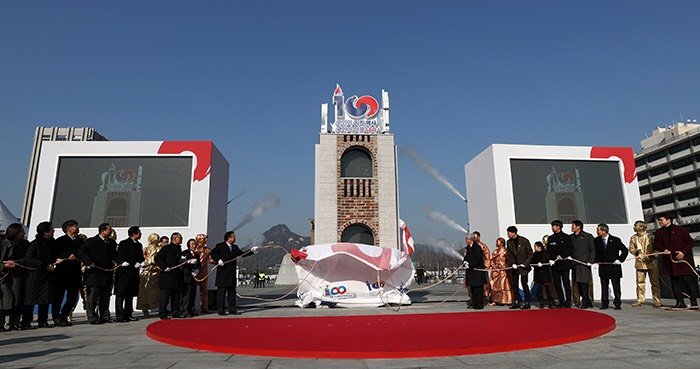 Gwanghwamun Square in downtown Seoul gained a new name on Dec. 20 in an unveiling ceremony for a tower commemorating the centennial anniversary of the March First Independence Movement of 1919.

Hosted by the Presidential Commission on the Centennial Anniversary of the March 1st Independence Movement and Korea Provisional Government, the ceremony was attended by commission chairman Han Wan-sang, Interior and Safety Minister Kim Boo-kyum, Park Yu-cheol, head of the Korea Liberation Association, descendants of patriots and people of merit, and former national soccer coach Cha Bum-kun.

After the ceremony, the commission officially named the nearby area Centennial Anniversary Square. Han Wan-sang, chairman of the Presidential Commission on the Centennial Anniversary of the March 1st Independence Movement and Korea Provisional Government, on Dec. 20 gives a welcoming speech at the unveiling ceremony in Gwanghwamun Square.

The provisional government complex in Shanghai, China, inspired the tower’s motif. Red bricks produced in the Chinese city were used to build the tower’s outer wall and the door was designed to remind visitors of Korea’s history of liberation from Japanese colonial rule. The top of the tower has a centennial emblem and slogan, the Taegeuk symbol, a handshake and a flame expressing the hope of carrying on the provisional government’s spirit of democracy and that of peace and nonviolence expressed by the March First Independence Movement.

“2019 is meaningful as the centennial anniversary of the March First Independence Movement and the provisional government‘s establishment. We faced various challenges over the last century, and based on our strong fighting spirit and creativity, we’ve succeeded in turning difficulties into opportunities,” Han said.

“The world is paying attention to our performance in peace on the Korean Peninsula and engaged society. We can hope for and pursue independence, democracy and peace with all of your efforts.”

The tower will be filled with Taeguek balls containing the people’s wishes and goals and events will run through April next year. Visitors can participate in activities such as putting their hand prints on a wall memorial of martyr Ahn Jung-geun and taking pictures at the tower. Statue performers of patriotic martyrs including Kim Ku, Ahn Jung-geun and Yoo Gwan-sun perform on Dec. 20 at the launching ceremony of the commemorative tower for the centennial anniversary of the March First Independence Movement.