Travel publisher Lonely Planet has selected Korea, the host country of the PyeongChang 2018 Olympic and Paralympic Winter Games, as one of its top-10 countries to visit in 2018. The photo above shows the Alpensia ski resort in Pyeongchang, Gangwon-do Province, an Olympic venue. (Korea.net DB)

Lonely Planet, a publisher of travel guides and related media, has recommended Korea as one of its top-10 countries to visit next year.

One of the highlights, of course, is that Korea is hosting the PyeongChang 2018 Olympic and Paralympic Winter Games in February.

“Korea has embraced its hosting of the 2018 Winter Olympics in Pyeongchang and a new high-speed railway line will whisk travelers across the country to the Games,” said Lonely Planet.

Describing Korea as “a compact playground of Asian modernity,” the magazine introduced Seoul’s cityscape by saying that, “High-rises soar in the futuristic capital city, which in 2017 received a huge facelift with the opening of its new Seoul-lo 7017, a high-line park with cafes, bars and libraries along a disused elevated highway.” 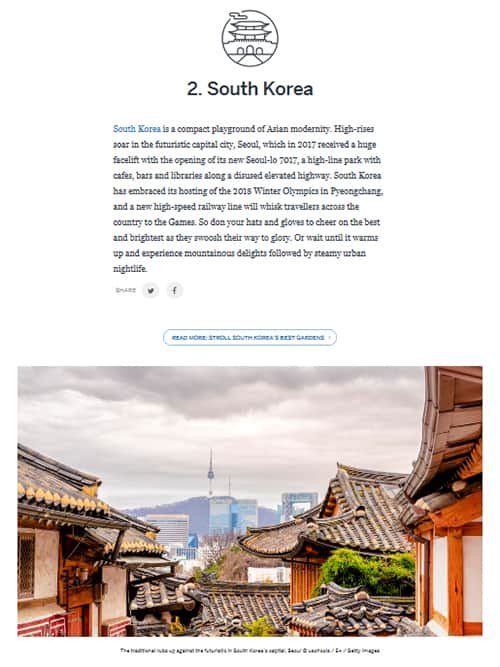 Travel publisher Lonely Planet introduces Korea as a country to visit in 2018, on Oct. 25. (Captured from Lonely Planet)