The Gangseonru Pavilion is seen through the arc of the Seungseongyo Bridge at the entrance to Seonamsa Temple. The bridge was built in the 17th century and has been nationally designated as Treasure No. 400.

“Aged well” is the sort of description that could be used for a classy elderly woman who people just can’t help but describe as glamorous, despite the tiny, dense wrinkles on her hands, eyes and lips.

This description could also be used for an ancient temple. Seonamsa Temple in Suncheon, Jeollanam-do, has, indeed, aged well. 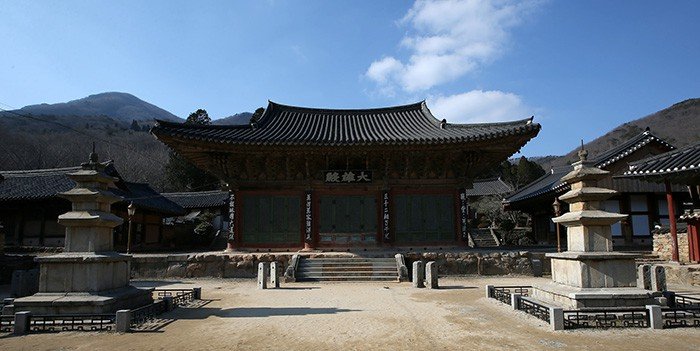 The main gate (top), Iljumun, and the main hall (bottom), Daewoongjeon, which has been nationally designated Treasure No. 1311, are both landmarks at Seonamsa Temple. The gate’s low walls on either side are an architectural feature unique to Seonamsa Temple.

Seonamsa Temple, with nearly 1,500 years of history, is located at Jogyesan Mountain in Suncheon, Jeollanam-do Province. It’s said that the temple was first built by the monk Ado in 529 during the reign of King Seong (d. 554), the 26th Baekje monarch. It was rebuilt and repaired numerous times over the next few centuries, eventually achieving its current form. Most of the wooden buildings that remain, including the main Daewoongjeonhall, were built during late Joseon times (1392-1910).

A walk along the mountain path, up through the valley, reaches the rainbow arced Seungseongyo Bridge and the Gangseonru Pavilion behind it, letting hikers and visitors know they’re near the temple’s entrance. A short break here helps with the walk to the temple. Passing by the wild tea forest and a pond, the main gate of the temple is the Iljumun. A panel reading “Jogyesan Seonamsa” welcomes visitors to the sacred site. There are none of the grim-faced four heavenly gods at the gate, as at other Korean temples, but only two plain wooden columns and low walls on either one side of the gate.

Inside the entrance sits the main hall, the Daewoongjeon, but other buildings are not immediately recognizable. This is one reason that experts say the arrangement of the buildings at Seonamsa Temple is unusual. The buildings at Seonamsa Temple don’t seem to be designed or arranged according to one great master plan, but they seem to be built by need, time after time, along the path and along the natural topography of the site, one by one. The temple, thus, is often described and compared to a little old village. Architect and expert on ancient Korean architecture Kim Bong-ryeol called the temple “a little town deep inside a mountain.” 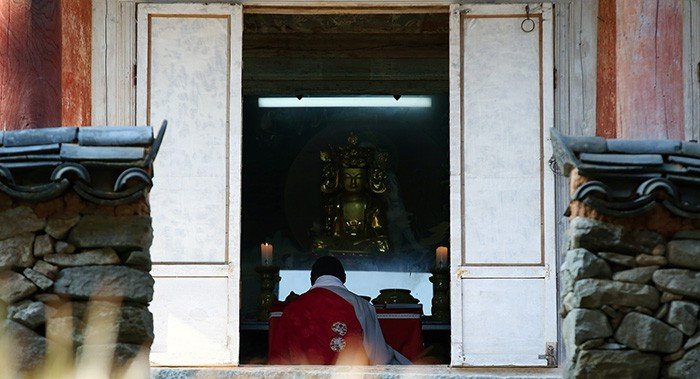 A praying monk (top) complements the faded colors on the wooden beams (bottom). The faded colors of the wood are often considered one of the natural charms of the temple.

Old apricot trees along a stone wall and the path are the pride and beauty of the temple. A 600-year-old apricot tree, the Seonammae, is designated as a natural monument. Bursting apricot flowers blossom in the springtime and balance in perfect harmony with the color-faded wooden frames that are exposing their hidden skin.

The dignity, beauty and authenticity of the old temple doesn’t come from any sense of solemnity or grandeur, but comes from the acceptance of getting old over time.