Home Magazine Travel Suncheon, a city of a thousand cranes

On Feb. 25, a flock of hooded cranes flies over the wetlands at Suncheonman Bay. Some 1,400 birds spend the winter in Suncheon until the middle of March when they fly back to Siberia.

“A city of a thousand cranes” is an epithet for Suncheon city in Jeollanam-do Province.

Here, more than a thousand endangered hooded cranes spend each winter in the Suncheonman Bay wetlands.

In 1996, a quarry excavation was underway in the Suncheonman Bay wetlands. However, when it was discovered that over 70 hooded cranes spend the winter months there, the development project was cancelled and a conservation movement sprung up in its place. Telephone poles that could potentially cause harm to the birds were removed. In the already harvested fields, rice was scattered as bird feed. Suncheon residents avoided driving through the birds’ habitat, and non-residents were prohibited from entering the area without special permission. Today, some twenty years after the first discovery, over 1,400 hooded cranes can be seen flocking to the wetlands and neighboring rice paddies to take shelter during the winter. 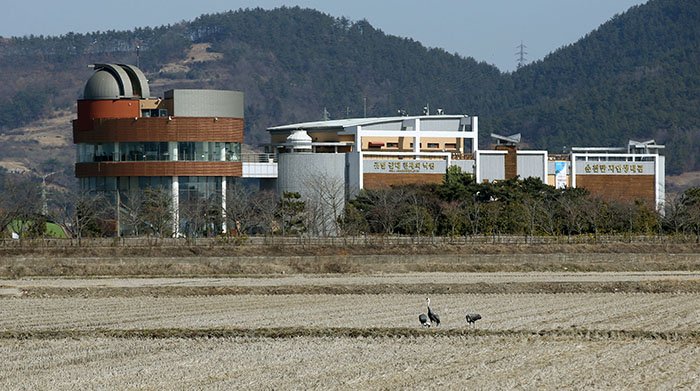 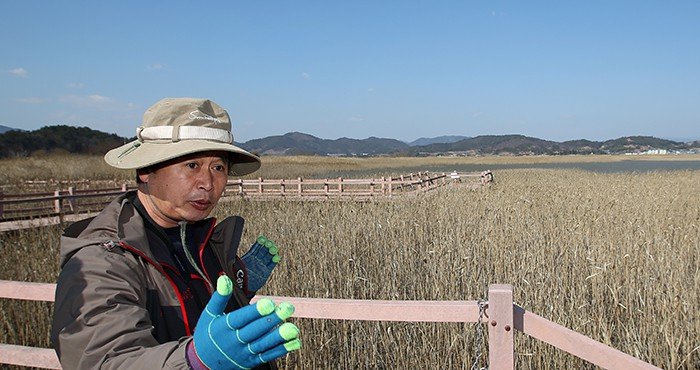 Kang Na Ru, a tour guide at the Suncheonman Bay Eco-Museum, said that, “Of the 15 species of cranes found around the world, the hooded crane (Grus monacha), the common crane (Grus grus) and the white-naped crane (Grus vipio) all take shelter in the Suncheonman Bay wetlands. Of the 500 species of birds found around Korea, over 250 species can be spotted in these wetlands, as well.” He said, “Suncheon received a big gift for Christmas in 2014 when it was confirmed that more than 1,000 hooded cranes inhabit the area,” and added that, “Suncheon has since been renamed ‘a city of a thousand cranes.'”

Just as Kang explained, it’s easy to spot a variety of migratory birds in the estuary of Suncheonman Bay. A blackfaced spoonbill dips its beak into the mudflats looking for food, while a red-backed sandpiper (Erolia alpina) stages a dance in mid-flight as if to greet the bird watchers gazing up from the deck of a sightseeing boat. In the near distance, a pair of mallards flutters its wings in tandem and a heron glides along the curve of the marsh in the winter sun. In a riverbed not too far from the wetlands, an eagle observes the winter scenery with utmost leisure. 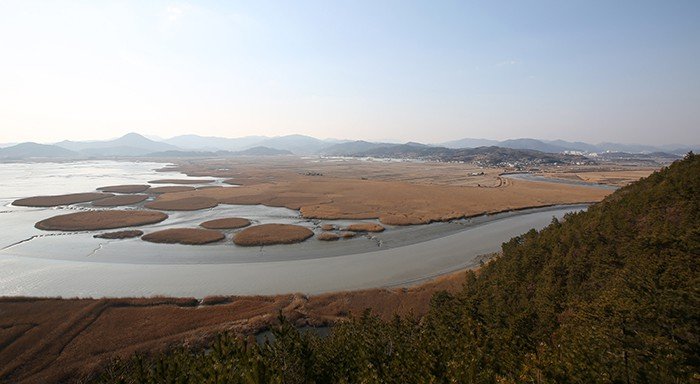 If you follow the Reed Deck, a raised walkway through the reed beds, up to the Yongsan Observatory, you can see all of Suncheonman Bay. 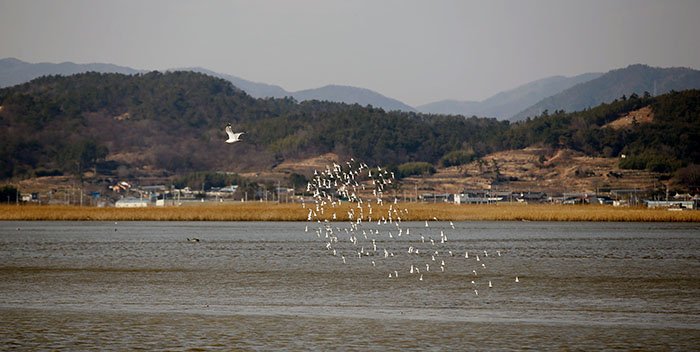 A variety of migratory birds can be observed from the sightseeing boat. On Feb. 25, a flock of red-backed sandpipers perform a group dance for the bird watchers on the boat.

The Suncheonman Bay wetlands were protected under the RAMSAR Convention in 2006. In addition to being able to observe migratory birds in the wintertime, such as the hooded crane, the region also boasts scenic views year-round in every season. In the autumn, the vast wetlands fill up with reeds that rustle in the wind. This expanse of reeds stretches over 5.4 square kilometers, forming the biggest reed field in all of Korea. The spectacle can be best appreciated from the raised Reed Deck walkways or by taking a Suncheonman Bay boat tour. 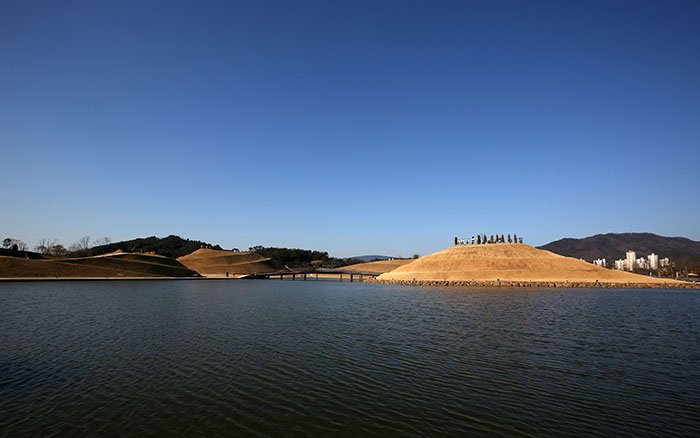 At Korea’s first national garden, the Suncheon Bay National Garden, you can look around 57 differently themed arboretums and climactic zones.

While visiting the ecofriendly city of Suncheon, it’s a good idea to pay a visit to the Suncheon Bay National Garden.

The garden was opened following the 2013 Suncheon Bay National Garden Exposition and covers an area of 112 square meters. It’s located between Suncheon City and Suncheonman Bay, making it a geographic buffer for the wetlands. The garden takes visitors through 57 themed gardens, 11 of which are based on national themes for countries such as China, Thailand, the U.S. and the U.K.

Kim Jong Baek, a tour guide at the Suncheon Bay National Garden, said that, “Most of the flowers in the garden are in full bloom between April and May. Up to 110,000 people visit the gardens during the peak season, but unlike an amusement park the gardens never feel overcrowded. At Suncheon Bay National Garden, you can enjoy the flowers and the trees in each of the gardens at your own pace.” Adding that he personally thinks that the gardens are most beautiful on a rainy day in the summertime, Kim said that, “The garden has a different charm in every season, so it’s impossible to experience all of its magic in one day.”

A wide variety of bird species can be easily spotted from the raised Reed Deck walkways that wind through the Suncheonman Bay wetlands.

Eagles enjoy the sun by the riverside as the waters flow into the Suncheonman Bay wetlands. 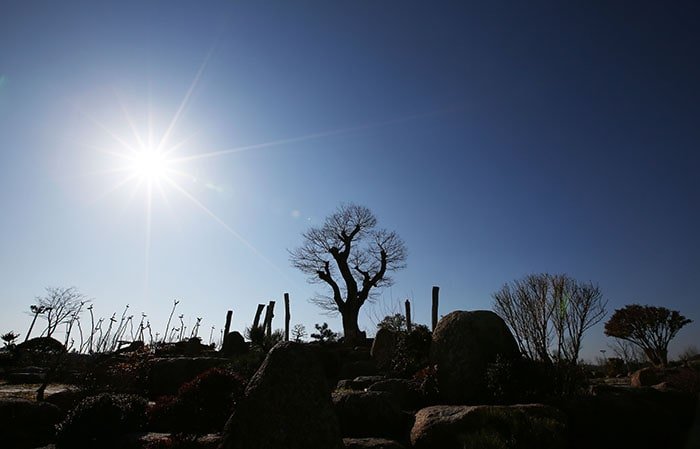 A nettle tree, originally from Jeju Island and estimated to be over 600 years old, takes root in the Suncheon Bay National Garden. It was donated to the garden to celebrate its grand opening. 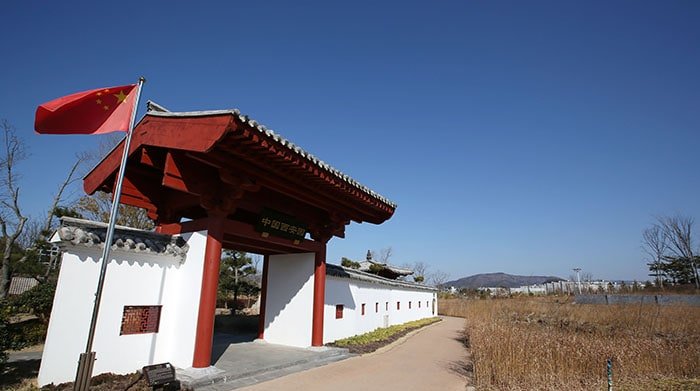 It’s easy to spot the difference between the various gardens at the Suncheon Bay National Garden. The entrance to the Chinese national garden flies that country’s red flag.