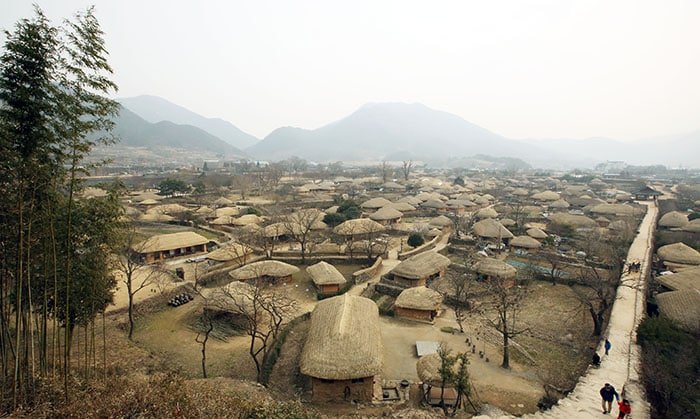 Naganeupseong Village, a neighborhood that has retained the look and feel of early Joseon days, is made up of 98 households.

Wisps of white smoke rise from the thatched roofs as the floors are heated against an early spring chill. A few alleyways down, over the neighbor’s wall, laundry hangs on a line, swaying to and fro in the spring sunshine. Morning has dawned at the Naganeupseong Village and Fortress (낙안읍성, 樂安邑城) on a tranquil day in mid-February.

Korea’s Jeollanam-do Province, with its vast and fertile plots of land, was often the target of invasion, starting in the late Goryeo period (918-1392). The area that now makes up Naganeupseong in Suncheon City was particularly prone to attacks. In 1397, during the early days of Joseon and in the sixth year of the reign of King Taejo, General Kim Bin-gil, a native of Nagan, built up the town’s fortress walls with mud and earthen works. Twenty-seven years later in 1424, the sixth year of the reign of King Sejong, the fortress wall was expanded and rebuilt with stone to become the Naganeupseong Village and Fortress we know today. 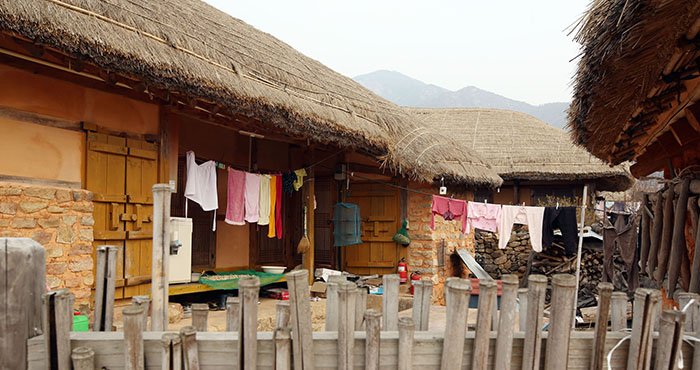 Laundry hanging in the heart of the Naganeupseong Village and Fortress tells the tales of people’s livelihoods from the past and the present.

A distinguishing feature of Naganeupseong that sets it apart from other eupseongs, or village fortresses, is the fact that actual residents continue to occupy the houses here. Currently, there are 98 households comprising of 228 people living in the thatched homes. As one of the oldest forms of homes in Korea, the thatched houses at Naganeupseong represent traditions of the past combined with today’s modern life.

Considering that our modern lives revolve around tall skyscrapers in a concrete jungle, it’s not easy to imagine living in a thatch-roofed home. Every year, the roof needs to be re-thatched, the unpaved front yard asks for constant sweeping and the drafty windows can cause you to shiver indoors during the wintertime. Despite these challenges, however, the residents of Nagan live here with much pride. 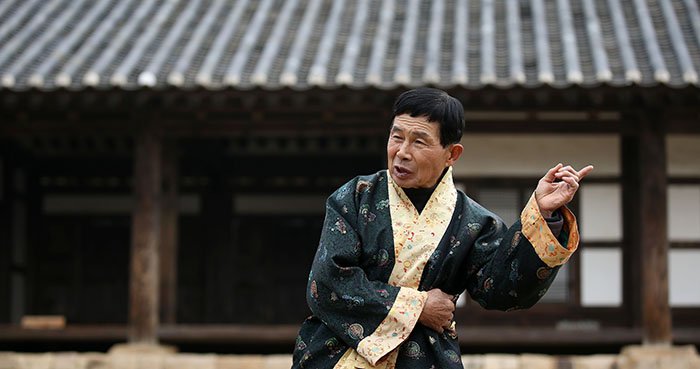 Song Gap-deuk, Naganeupseong’s honorary governor, says that the residents of Nagan are like one big family.

“Nagan (낙안, 樂安), meaning ‘a place of joy and comfort,’ is where the anti-colonial movement first began,” said Song Gap-deuk, the honorary governor of Naganeupseong. “The village, which was razed by the Japanese in 1908, cradles a dark past. Since being designated as a historical site in 1983, however, it has been slowly regaining its former glory. So far, about half of the village has been restored to its original form. It’s our hope that the restoration efforts will continue into the future.” Residents of Naganeupsong tend their crops in the gardens located between houses.

The Naganeupseong Village and Fortress, enclosed as it is within ancient fortress walls, is a village where past traditions and present-day lifestyles coexist peacefully. The historical site makes a great travel destination for parents wanting to educate their children about history or traditional lifestyles. The option to stay overnight in a local resident’s home has been attracting a lot of non-Korean tourists to the village, as well.

The tour guide at the Naganeupseong Village and Fortress said that, “After broadcasting the drama ‘Daejanggeum,’ which was filmed in the village, there have been more Chinese and Southeast Asian tourists visiting the locale.” He added that, “It doesn’t snow very often in Naganeupseong, but when snow comes once every few years and all the thatched roofs become powdered with snowflakes, that scenery makes it worth the wait.”

More information about the Nagaeupseong Village and Fortress can be found at the link below:
http://www.suncheon.go.kr/nagan/

The Naganeupseong fortress wall was initially built with mud, but was expanded and rebuilt in stone in 1424, the sixth year of the reign of King Sejong, to become the structure we see today. With a winter chill still in the air, smoke rises from one of Naganeupseong’s chimneys as a fire boils water in pots sitting atop outdoor furnaces on a cold February day.