On Feb. 2, the National Palace Museum of Korea reopens its Joseon Palaces and Royal Court Life exhibition halls and reveals drawings and plans of the northern section of Gyeongbokgung Palace.

The National Palace Museum of Korea has reopened two of its permanent exhibition halls, filled with historical artifacts that tell the history of life in Joseon palaces.

On Feb. 2, the museum revamped the Joseon Palaces and Royal Court Life sections and opened their doors to the public.

Greeting visitors for the first time is the Bukgweoldohyeong (북궐도형, 北闕圖形), or the, “drawing plans for the northern section of Gyeongbokgung Palace,” which was added to the Joseon Palaces collection for the reopening. The plans, dating back to 1907, are 3 meters wide and 4 meters long. The drawings are significant in that they served as an important resource for the reconstruction of Gyeongbokgung Palace, which was largely destroyed during the colonial era.

In addition to the Bukgweoldohyeong, the Joseon Palaces hall also houses a replica of the Donggweoldo (동궐도, 東闕圖), or, “drawing plans of the eastern section of Changdeokgung and Changgyeonggung Palaces,” the Seogweoldoan (서궐도안, 西闕圖案), or the, “plans for Gyeonghuigung,” and the Gunggweolji (궁궐지,宮闕志), or, “records of the royal palaces.” A bronze dragon from the pond at the Gyeonghoeru Pavillion at Gyeongbokgung Palace, and a dragon head from the Seongjeongjeon Hall at Changdeokgung Palance, are also on display. 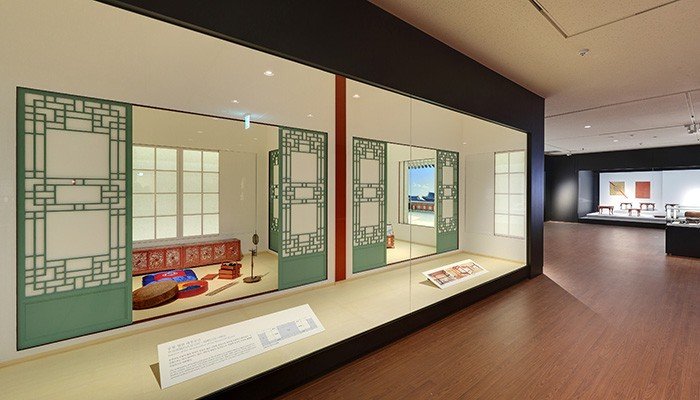 The Royal Court Life exhibit showcases a variety of royal household items, such as furniture, dishes and lamps, in rooms modeled after the queen’s living quarters.

At the Royal Court Life exhibit, visitors can see royal costumes from Imperial Prince Yeong (1897-1970), and the ceremonial jacket and skirt worn by his wife, Princess Yeong. There are a wide range of royal household items on display as well, such as bookshelves, stationery, ink stones, dishes and lamps. The reconstructed royal rooms are modeled after the gyotaejeon (교태전, 交泰殿), or the living quarters of the queen, and they allow visitors to take a peek into life in royal Joseon palaces.

The National Palace Museum is free and will be open over the Seollal Lunar New Year’s holiday. More information about the exhibit can be found at the museum’s website, http://www.gogung.go.kr .