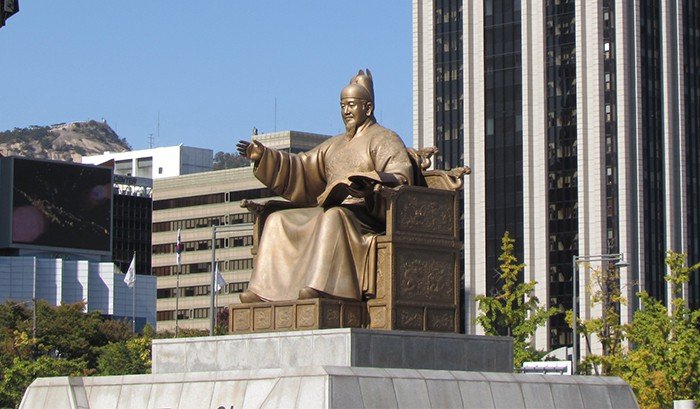 The birthday of King Sejong the Great, who oversaw the creation of the Korean alphabet, became Teacher’s Day in Korea in honor of him.

“Stand up for the teacher and glorify him. He could have been a messenger.”
– Ahmed Shawqi, the prince of poets

Education in Korea not only has an important place in society, but it also is the most important thing in the life of a Korean. It is their future. Teachers in Korea have all the respect. The teaching profession in Korea is a sacred profession.

Teacher’s Day falls on May 15 every year. It’s a very special day. On this day, I would like to thank my teacher, Mona Serag, who was the first teacher who taught us Korean at the Embassy of the Republic of Korea in Egypt, and who gave us a lot of caring and love. She is also a very good English teacher. She not only taught us Korean language, but also all about Korean society and history, and Korean ethics. Because her students were from many countries, not only from Egypt, she taught us in many languages, such as Korean, Arabic and English. She always wanted to make sure that her students understood her lessons. Until now, she supported us and was always ready to help us improve our Korean. We felt that thanking her is just not enough. She is a teacher assistant in the Faculty of Languages at the University of Ain Shams, in the Department of Korean Language, and graduated in 2011. Now she is studying for a master’s and we hope she gets her Ph.D. in Korea very soon. Honorary reporters pose for a photo with Mona, their teacher.

The Korean Language Department is one of the best departments in the Faculty of Languages. It is a simple example of the level of education in Korea. There are many Korean professors who teach in the Department of Korean Language who are very skilled professors and the level of graduates is very high. For example, the Egyptian Samy Rashad is now famous in Korea after his victory on a TV show. Two honorary reporters pose for a photo with Mr. Oh, one of their teachers.

The sanctification of teachers arrived in Egypt through these Korean professors, headed by Professor Oh Sejong, the head of the Korean Language Department at AinShams University. He is the most famous and beloved teacher among the students in the department, and among students at the Korean Cultural Center in Egypt. Every Thursday, he gives a lecture to students at the Korean Culture Center in Egypt. The lectures are attended by many students. Professor Oh speaks Korean and Arabic, but he speaks only Korean during his lectures so that students can understand the Korean language by themselves. Greetings to all Korean language teachers who contribute to the strengthening of relationships between Korea and the Arab world! Honorary reporters pose for a photo with their teacher Menna.

– Why do you like teaching and why did you choose it?

I love the process of education and I love the Korean language. At the same time, I feel that I wanted to help others with the knowledge that I had learned, and it wasn’t possible to deliver this knowledge without learning how to deliver it properly. I searched for a way to deliver this knowledge and found that education is a combination of sociology and psychology, with the science of language. I felt it was a noble message and I thought how to share the information with my students, and how each student has a different way of dealing with it, until I teach them the information in a way that suits them. From the religious side, this is a knowledge that’s beneficial because it’s something that you put it another person, not just science, but at the human, literary and moral levels. The idea does not die, and then you earn a moral return and a literary return. There is a wisdom, I believe, in the phrase, “Let us remember: one book, one pen, one child and one teacher can change the world,” as Malala Yousafzai said.

I met a lot of people and I talked in Korean the whole time. I have lived a lot on my own since I was 18-years-old, and I came back to Egypt when I was 25-years-old. This period was the basic period in which a person becomes conscious. For the Egyptians, I was half Egyptian and half Korean. For the Koreans, I was half Korean and half Egyptian. This mixture was due to God and then my father and mother, and then everyone who taught me Korean. I studied at Kyung Hee University. It was one of the best courses I have ever studied. Also, I studied at Cheongju University and at Busan National University. I studied short course at Konkuk University and after that I studied for my master’s at Seoul National University from 2010 to 2013.

Now, I have also prepared for a Korean language teachers diploma in August 2016. This diploma is only for non-native Korean speakers. It’s an important diploma for non-native Korean speakers to properly become a Korean language teacher. I also have a translation diploma from the American University in Cairo. Now, I am a teacher and translator. Otherwise, I’m a free soul. I don’t like being a teacher, but I love spreading knowledge among people because God gave us this science and knowledge. When we teach it to another person, and this person teaches it to another person, you feel that the world is adorned when the light comes out of all humans.

– Who was the most influential teacher you had?

There are two professors. The first one is Professor An En Yong who was a volunteer at the Korea International Cooperation Agency (KOICA). She taught me in the first year in the Korean Language Department. She was a volunteer and her goal was to teach some Egyptians Korean and she had the greatest influence on configuring the language inside of me and on configuring my personality. She was the best teacher in the way that she delivered the information. She taught students in their homes. She was semi-resident in my house and she made me improve my Korean quite a lot.

The second professor was Min Hyun Shik, my supervisor at Seoul National University. He was the supervisor for my master’s thesis. He was the one who supported me psychologically and scientifically. He adopted me because I was the only non-Korean in the Korean language education institute at Seoul National University. He saw that I was studying a very difficult field, especially with other native speakers, so I must be at the same level with them. He was very supportive.

– What do you think of the quality of Egyptian students who are attending the cultural center and learning Korean?

They are students at the highest level. They are at the top of Egyptian society because they chose a rare language that’s somewhat strange to the Egyptian mind. They are persevering and want to learn this language. They are respectful people with a high level of morals. They are very open-minded and most of them speak other languages, too.

– What are some of the common mistakes among those Egyptian students?

Mistakes are not related to them being Egyptian but are related to Arabic speakers in general who study Korean. There are common mistakes repeated by all native Arabic speakers who start with Korean. Whether in Egypt or in any other Arab country, most of these are linguistic mistakes. Once the students know their mistakes, they correct them and then they become very proficient in the language.

– To which level in Korean can students reach at the cultural center?

The center offers six levels, from low to high, but the goal of the center is not only to teach Korean, but also to spread knowledge about all things Korean. By learning at the cultural center, students might encounter some difficulty in the language, but the level of the student is determined by the student themselves. There are lots of students who reach very high levels and then travel to Korea on a Korean Government Scholarship Program (KGSP).

– What is the reason behind the high level of students in the Korean Language Department at AinShams University?

This is due to many reasons. The first is that even if they enter the Korean language department, they are the best students at general secondary stage from across Egypt, and they know the right way to study. Second, they study more than 20 hours of Korean language per week so they are practicing Korean more and more. That’s what makes them distinguished from students at other universities in other Arab countries.

– Do you have any tips for anyone learning Korean, to improve quickly?

One of the most popular answers is to watch TV, listen to Korean songs and to watch movies. This is one of the fastest ways to learn any language, not only Korean. Also, don’t be ashamed of making mistakes. You can correct them and won’t be disrespected by anyone who’s not fluent in a second language. Consume Korean soap operas, songs and movies, and then practice everything you study first-hand.

Finally, we would like to wish every teacher in the whole world a very happy Teacher’s Day!