About 400 kilometers southwest of Paris, Angouleme has been playing host to a comics festival since 1974, and this year it brings together cartoonists from Korea and France.

Starting on Jan. 28, the 43rd Angouleme International Comics Festival spotlighted a series of well-known online comic strips from Korea, called “webtoons” in Korean, in honor of the 130th anniversary of the establishment of diplomatic ties between Seoul and Paris. 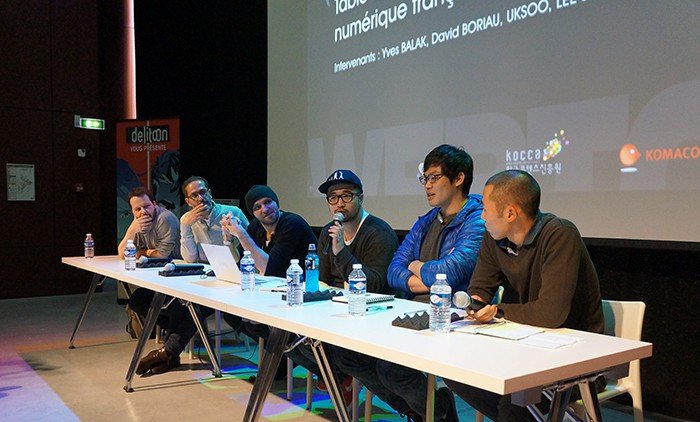 Cartoonists from Korea and France talk about how they make comic strips during a session at the Angouleme International Comics Festival.

Fans loved it when Lee Jong-beom and Uksoo, who gained fame with his “Ho!” and “Yeon-Ok is Watching” strips, picked up electronic pens and started drawing cartoons on the screen. Some graphic novel fans approached them to share their own creations with these artists.

“It’s really nerve-racking to give a drawing demonstration in front of an audience; the process of creating our works of art,” said Lee Jong-beom. “But I enjoyed it as many people were really interested in coming to see me,” he added.

Uksoo had fun, too. He said, “This is my first time to be invited to this festival. It’s a whole new experience for me, to be here, showing my creations in person.”

The festival set aside some time during which cartoon artists from both Korea and France could share their ideas about illustrated visual art. Among those in attendance at the talk were French digital cartoonists David Boriau and Yves Balak. They talked about techniques required to produce digital cartoon content.

“This festival provides a glimpse into the way in which Korean comic strips could potentially make inroads into European markets. Hopefully, both countries will keep working together across the digital cartoon industry, quantitatively as well as qualitatively,” said Director Frank Bondoux of the Angouleme International Comics Festival. 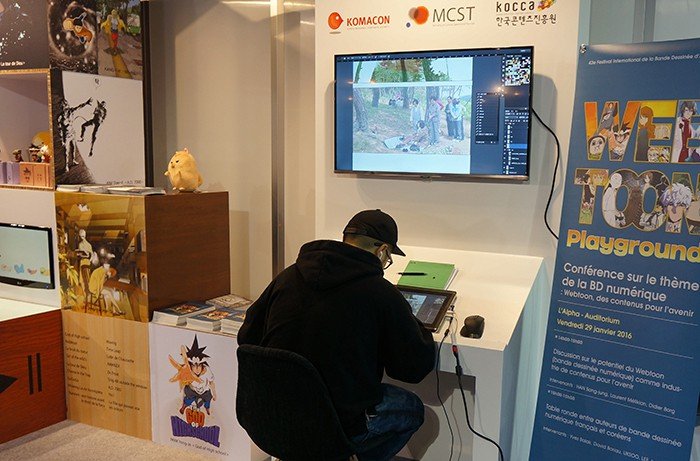 Cartoonist Uksoo shows how he draws his comic strips at the Angouleme International Comics Festival. Daou Technology, a Korean IT firm, and the French comics company Delitoon sign an agreement to jointly invest in the production of online comic strips.