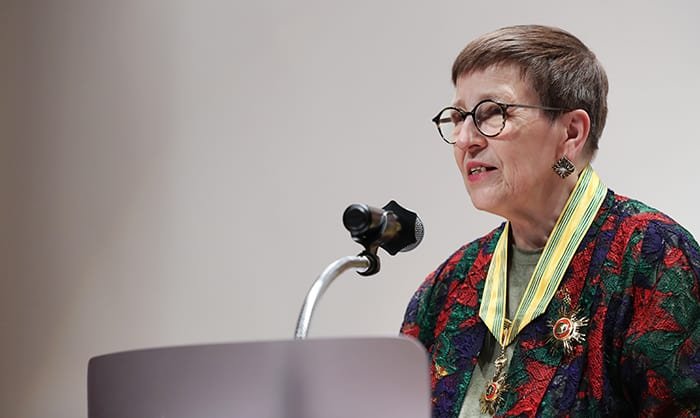 Presidential writer Elizabeth G. Kraft Lee from the Korean Culture and Information Service (KOCIS) gives a brief speech after receiving the Peony Medal during a retirement ceremony at the National Museum of Korea on June 29. (Kim Sunjoo)

Elizabeth G. Kraft Lee, a writer and editor who worked 41 years at the Korean Culture and Information Service (KOCIS), part of the Ministry of Culture, Sports and Tourism, was awarded the Order of Civil Merit Peony Medal for her services to the nation in a ceremony at the National Museum of Korea in Seoul on June 29.

Kraft Lee was in charge of supervising the English translations of official government documents, including English versions of revisions to the constitutional law, presidential speeches, official letters and statements, other government works, and official Korean government press releases.

“Elizabeth Kraft Lee has been recognized for her commitment to promoting the national image of Korea through her professional editing skills for 10 presidents,” said the Ministry of Culture, Sports and Tourism in a press release.

“By working at KOCIS, I had a great opportunity to be a part of the very important modern Korean history,” she said after receiving the medal from Minister of Culture, Sports and Tourism Do Jonghwan at an official retirement ceremony for civil servants held at the National Museum of Korea on June 29.

“I had only one opinion. It was important to explain as clearly as possible what each administration was doing, and why. It didn’t matter who was president,” she said.

Korea.net sat down with Kraft Lee to hear more about her four decades as a presidential writer. 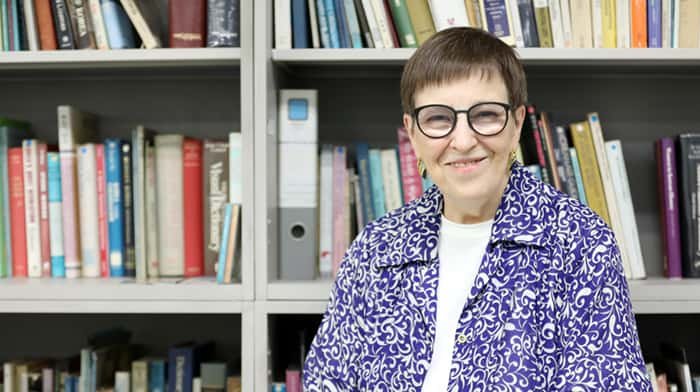 Elizabeth Kraft Lee stands in front of the shelf that stores her collection of books, at the KOCIS offices in Seoul. (Choi Tae-soon)

Please tell us how you worked

There are three translators in our office. The work usually gets divided into three and they each do one part. Then I put it all together and give it back to them. They re-read what I’ve edited to see whether I’ve gone too far from the Korean, because sometimes I rewrite things, and they make suggestions because sometimes they think of better expressions. It works very well because we all respect each other.

It must be difficult to translate Korean into natural-sounding English.

We have a hard time because what you say in Korean is so different from what you would say in English. The two languages are different. The two cultures and the Western world outlook and the Korean world outlook are so different that it’s very hard sometimes to make the president sound nice in English. They may sound good in Korean, but they say things that people wouldn’t say in English, so it’s hard to get them into natural English. We can’t just go word-for-word, so we do our best.

What do you do when you translate a Korean expression that sounds strange in English?

Sometimes you have to add an explanation and that’s easy if you’re doing a press release or a statement. You can just put the explanation in parentheses. For a speech, it’s much more difficult. You can’t just translate the words. You have to figure out what the meaning is of these words. Then we have to figure out how we would say that in English to get the same meaning across.

Very rarely, I say that we just have to delete this. It’s just nonsense in English.

You worked with 10 Korean presidents. Were there good speakers and bad speakers?

I think if you took the speeches from every president and took out the slogans, you wouldn’t be able to tell one from the other. I felt that presidential speeches are part of ritual ceremony in Korea. For example, if you go to the March 1 ceremony, presidents say practically the same thing every year. There would be little differences, but not big ones. It would be hard to tell the difference between one president and the other.

I think President Moon is the first one that’s a little bit different. He tends to be more poetic. He uses poetic types of expression that sometimes are hard to translate.

What were some of your happier moments during your career?

The most exciting time was the first inter-Korean family reunions. That’s when the whole nation was really excited. We had a press center set up at the Walker Hill Hotel. To see the first family reunions was a really exciting time. I’ve worked at the press centers for all three inter-Korean summits. The latest one didn’t have a press center. The first summit was the most exciting because it hadn’t had happened before. The next-to-last one in April was probably the most interesting because it was in Panmunjeom and we got to see more: Kim Jong Un crossing the border and taking the president back across the border. All of that was fun to see.

How did you start your work here?

Actually, it was nepotism. (laughs)

I moved to Korea after I got married. My husband was working for the Ministry of Culture and Information and he got me the job here at KOCIS.

What was it like to work at the same ministry as your husband?

For me, the job has been very good because the whole time my husband worked for the government. Particularly in those days, government officials went out after work and didn’t come home until late, but I knew what he was doing. I didn’t get the feeling that we were completely separated even when we didn’t get to talk to each other that much.

He has a very good idea of what I’m doing, too, so if I call him and say, ”Sorry, I won’t be home to fix supper tonight,” he knows what I’m doing, so it doesn’t bother him. It’s good both ways. 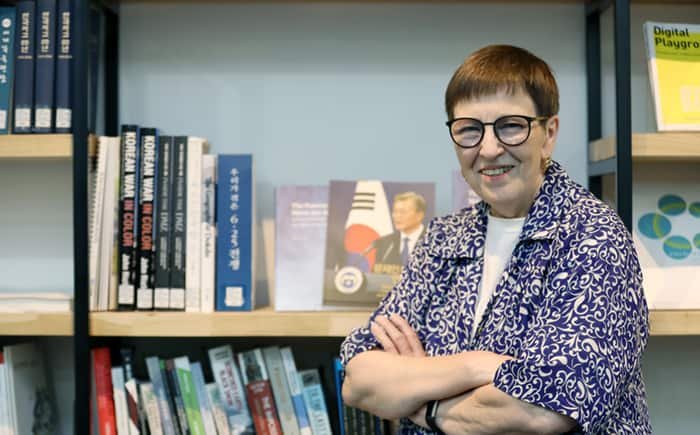 What is the biggest change since you started working in 1977?

When I first started working here, we still worked on typewriters. The translators would type up their translation and give it to me. I would make corrections in red ink on the paper and I sent it to people hired just for typing, and they would type it up and send it back to me. I would proof-read it and if I found mistakes, I would mark the mistakes and send it back. If it was a big mistake, the typists had to re-type the whole page. If it was a small mistake, they could white it out to make corrections and it would take us all day long to do a short speech. We would work way past curfew every time we had a speech because the process was so slow. There were government cars in those days that took us home.

When we got computers, my computer sat on my desk for weeks. I didn’t even turn it on. I thought, ”What do I need a computer for?” Then my colleague taught me how to use a computer and then it was like magic! You could move words around and you could correct your own mistakes.

The internet must have been magical, too.

We often had to call embassies to find out how a minister spelled their name in English or how a president spelled their name. We couldn’t look it up in Google. We didn’t have anything to search. My colleague said that I should be keeping a file of everything I learn, so I don’t have to call the same people time after time asking the same questions. I began keeping three-by-five cards in shoe boxes. I kept files of dates, names and what not for 35 years. There was a time when my files were really useful. When the office of the Foreign Press Secretary wanted to make the first speech book, it turned out that I was the only one who had saved the English translation of every speech.

What are your plans for retirement?

I’m the secretary of the Korean Branch of the Royal Asiatic Society. There are some things that need to be done at that office. My daughter from the U.S. is coming next week to cheer me up so for one weekend we might take a train to Gangneung.