The painting of a man wearing a socialism-inspired red scarf and another work depicting the face of a North Korean leader atop Marilyn Monroe’s body are both at the same time works of satire that mock the North Korean regime and works of art that contain a longing for freedom.

Song Byeok, the painter of these works, was born in Hwanghae-do Province, North Korea, in 1969. In the late 1990s when the North suffered from its great famine, Song lost his mother and sister when they died of hunger. Song also lost his father who was swept away by the torrent as they tried to cross the Tumen River to obtain some food. He returned to the North and begged the border guards to save his father, but he ended up being tortured by North Korean intelligence and was later sent to a prison camp. He was, to say the least, disenchanted by life in the North and decided to leave the country, crossing the Tumen River once again into northeastern China. After defecting from the North, Song Byeok now paints about North Korea. Song says he has realized what is freedom after being able to paint his own ideas.

Song barely made it to South Korea. Once here, however, he graduated from Kongju National University’s teacher college in Chuncheongnam-do Province (South Chungcheong Province) and studied Oriental Painting at Hongik University’s graduate school, starting to live the life of a painter.

He felt a sense of freedom when painting. No longer did he need to work on propaganda paintings. He had the freedom to paint his own ideas. Although he has gained freedom, he uses the penname Song Byeok instead of his real name because he still has relatives living in the North.

While studying at Hongik University’s graduate school, he started painting about the North, a land to which he could not return, even if he wanted to. His paintings have since been shown not only in South Korea, but also in Atlanta in the U.S., gaining rave reviews. Now, he is preparing for an exhibition in Berlin in October to mark the 25th anniversary of German unification.

Among his works is a painting showing the face of the newest North Korean leader atop Marilyn Monroe’s body as he tries to keep his dress from blowing upward, a harsh backlash against the tightly controlled North Korean society. Wind blowing up from a subway ventilation shaft lifts his skirt and fish at the bottom of the painting try to spring up above the water.

“The Internet is not available in North Korea and people can only listen to or watch Korean Central Television,” said Song. “The skirt is blowing up, but what is underneath the skirt is barely visible. Through the painting, I tried to encourage the North to reform and open itself.”

“Fish in the fish tank symbolize the North Korean people who are cut off from the outside world,” he added.

Song Byeok was interviewed at his studio in Ilwon-dong, Gangnam-gu District, Seoul, about how he fled the North and about his works of art. 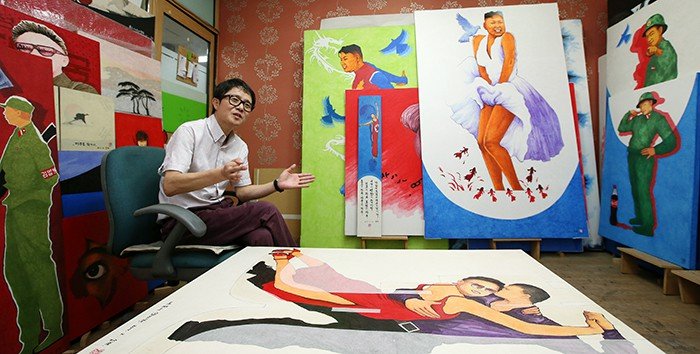 Song Byeok talks about his works of art in his studio.

– Why did you decide to defect?

I defected from the North because of hunger. In North Korea, it is impossible to eat until one is full. A sense of misery is beyond description when one does not eat for three days. People would not be able to understand if they haven’t actually gone through it themselves. I tried everything to survive and even ate tree bark. Think about how you would feel if your family was starving. My sister and mother starved to death. I defected from the North because I became skeptical about the North, thinking about why people have to starve to death there.

In the beginning, I didn’t mean to defect. I wanted to obtain food in China, so I crossed the Tumen River. In the process, I lost my father who was swept away by the water just as he stepped into the river. I called for him, but he waved his hands at me to move on. I also lived in a prison camp afterward. I entered the camp in August 2000 and was released in March the following year. Over 3 million people starved to death in the North during that famine. Of the 7 billion people on the planet, the most miserable in the world are North Koreans. No one can understand how desperate the North Koreans are.

What kinds of hardship have you faced upon reaching South Korea?

I swam across the Tumen River when the guards were away at lunch. I was hiding in the mountains during the day and went down to the villages at night, but people tried to avoid me, knowing that I was from North Korea. One person tried to keep me in his house. He was an employee at a church. He allowed me to hide in his attic. However, someone must have reported this to the Chinese authorities, as one day the police raided the house. I was almost caught, but the police didn’t see me because I hid under a sack of fertilizer.

I hid in the house for three or four months without leaving, not even once. There, I met people from Jeju Island. They brought me here to Korea in 2001. I was almost caught in the airport before boarding as I didn’t speak much Mandarin. 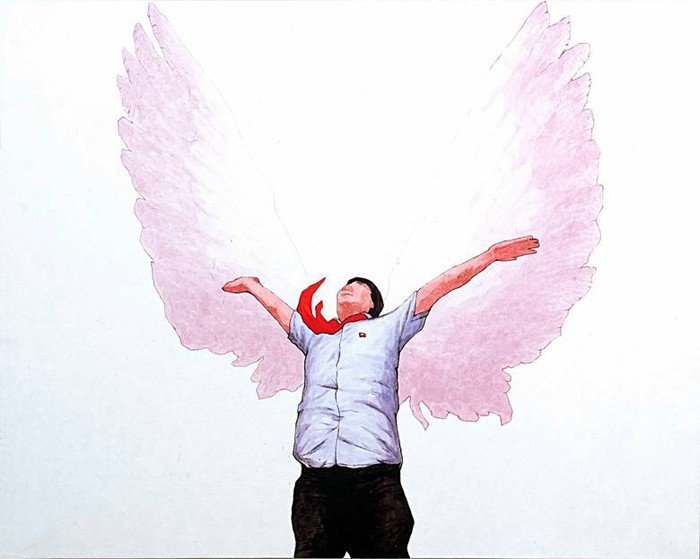 – You painted propaganda paintings and posters for seven years in the North. Is North Korean art used as a tool for propaganda for the regime?

I liked to draw as a hobby ever since I was young. I was born into an ordinary family and I could never dream about going to university, but I always carried around a sketchbook. One day, a Workers’ Party official saw me drawing and hired me. I only painted posters while other people worked as laborers. I didn’t earn a lot of money, but it was nice to do something that I liked to do.

There was no freedom in art. An instruction from higher up was given to tell me what to draw. Paintings by South Korean artists contain a message of their own. North Korean artists, however, should only express our happy country, loyalty to the Workers’ Party and its deeds. It is only propaganda for the Kim Il-sung clan. There are abstract paintings and nonrepresentationalist works, among others, but they do not exist in the North. In North Korea, paintings need to be always colorful and beautiful. Art exists only for the Kim family and art for the general public is unthinkable.

– You graduated from the College of Education at Kongju National University and studied Oriental art at graduate school at Hongik University. Why did you study art professionally in the South?

No one in my family has ever been to university. All my parents are in heaven. I felt sorry for my parents and I wanted to have a challenge. I also wanted to pursue my own art.

I wanted to pay back my parents. I entered university in 2003. I initially thought about becoming a teacher, but it was not easy to take the state-run civil service exam for teachers. I decided to become a painter and registered myself at Hongik University.

In the beginning, I tried to paint just like other artists, but then it came to me that I should paint about North Korean peoples’ lives since I lived in the North for over 30 years. So I started painting about North Korea. – What kind of messages are you trying to deliver though the paintings?

North Koreans are just like everybody else, but why do they have to suffer such hardships? North Koreans don’t know about their dignity. They don’t know anything about human rights. The North Korean regime shouldn’t let its people starve. I hope that people will be able to realize that North Koreans live such a hard life.

– What is it like to live in the South?

Tuition for one semester at graduate school amounted to somewhere between KRW 5 million and 6 million. I had to pay for everything, from paints and brushes through to canvases. It was difficult. I worked as a laborer for an outsourcing company, and then for a moving company. My health became worse because I worked too much. When I was in the prison camp in the North, my lungs started to hurt. There is a hole in one of my lungs. Whenever I get stressed, I become very sick. When I arrived in the South, I ate a lot of meat and consumed an excessive amount of food. Later, I got diabetes. I didn’t even know the word “diabetes” when I was living in the North.

– You’ve faced many difficulties after settling in the South. What are the biggest differences between North and South Korea?

I did everything from work in a restaurant to working as a laborer. I delivered cement at a construction site and worked on a farm, too. That’s why I became ill. I took out loans to attend graduate school, but I haven’t been able to pay them back yet. After selling my works of art, however, things got a little easier.

– You seem to have healed your scars by painting about North Korea. How did you overcome the scars of defection?

I draw a thatched-roof home against the backdrop of a sunset. Smoke rises from the chimney. I imagine that my family is gathered in the house and that we’re eating bowls of white rice. I think about how nice it would be. A sense of longing for lost family is beyond description. Only people who have experienced it would now how painful it is. Song Byeok says he paints about the North, his hometown to which he cannot return, and expresses his emotions on the canvas.

– What does North Korea and art mean to you?

North Korea is a land where my ancestors used to live and is a land of longing. It is a place to which I cannot return, even if I wanted to and longed for it. There are many multicultural families in South Korea. They can return to their home country and see their parents if they can afford to. However, no matter how much money you have and no matter how wealthy you are, you cannot go to the North. During Chuseok and Lunar New Year’s Day, you cannot visit your hometown and it is unbearably sad.