Three years into her presidency, President Park Geun-hye has solidified the foundation for a new economic take-off, and to accomplish all this the Park Geun-hye administration has relied on “culture” as a driving force for economic growth.

Since 2013, the government has carried out its so-called “Culture and Creativity Fusion Belt” project, a development center for mass media and pop culture. The project, considered to be one of Park’s core projects to promote the creative industries, features a Culture and Creative Venture Complex where a wide range of cultural content is created. There’s the Culture and Creativity Academy, designed to foster and train talented individuals. Lastly, there’s the K-Culture Valley, a venue that will house a concert hall and a theme park based on popular Korean content.

The Culture and Creativity Fusion Belt project has created a virtuous circle in the ecosystem across the cultural industries. This facilitates the making of creative content, from the planning and materialization all the way through to reinvestment. The effort has resulted in the nation’s content exports hitting USD 5.7 billion in 2015 alone. It is also assumed that more than 53,000 jobs will be created over the next five years. 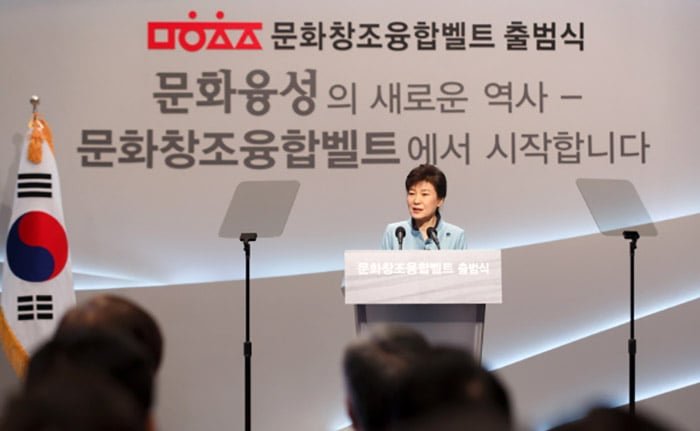 President Park Geun-hye stresses ‘cultural creativity’ during the opening ceremony of the Culture and Creativity Fusion Belt on Feb. 11, 2015.

The efforts put into developing the creative industries have also reinvigorated the tourism sector. The number of non-Korean tourists visiting Korea reached about 14.2 million in 2014, the highest ever.

In addition, the government launched its “Korea Grand Sale” in the second half of 2015, a nation-wide system of discounts and reduced prices during which non-Korean shoppers and tourists can enjoy a variety of deals on flights, accommodations and restaurants and at duty-free shops and shopping malls. The campaign has brought a turnover of KRW 345.7 billion to the tourist sector. Tourists pose for a photo during the start of the Korea Grand Sale. 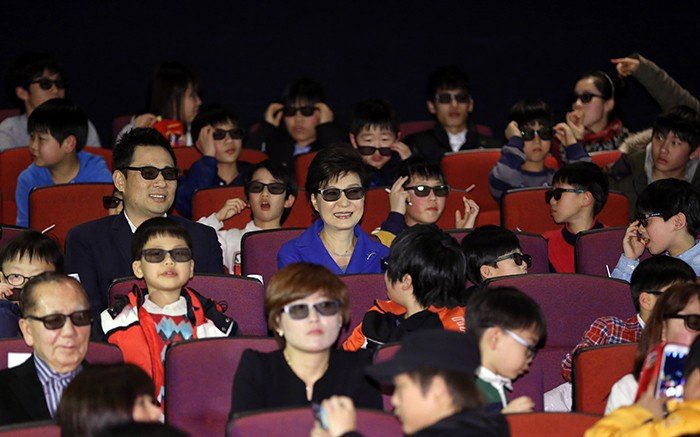 The last Wednesday of every month has now been designated “Culture Day,” a day when people can watch performances, films and sports games at a discount or even for free. The campaign is part of the government’s efforts to give people more opportunities to enjoy cultural activities. Since the launch of Culture Day, the nation has seen a rise in its overall consumption of cultural activities, up 23.8 percent.

Over its three years from 2013 to 2015, the Park Geun-hye administration has also worked continuously to put nine other cultural assets on the list of UNESCO World Heritage items. The items include the records of the New Community Movement, or Saemaul Undong, a set of agricultural development policies from the ’70s and ’80s, the Namhansanseong Fortress in Gyeonggi-do Province, Baekje Historic Areas, kimjang, the process of making kimchi, nongak, a form of traditional farmers’ music, and the traditional juldarigi tug of war. 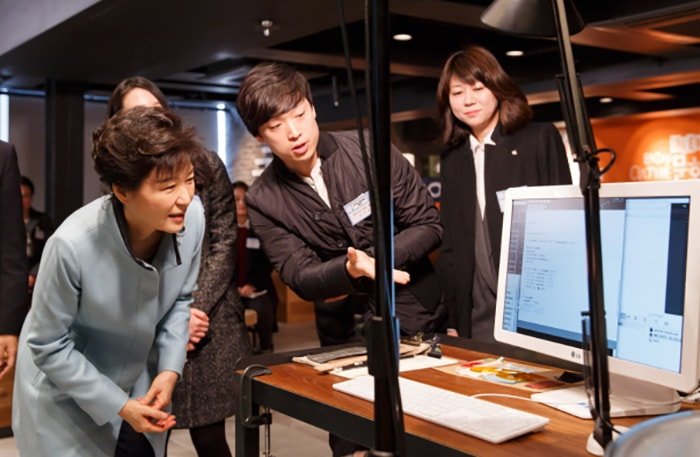 President Park Geun-hye talks to young CEOs running their startups at the Culture and Creative Fusion Belt in February 2015. The government has also individualized the nation’s welfare services in order to improve the quality of life for all Korean citizens and to promote happiness among the people.

It has increased welfare spending by about 24.2 percent and offered people an individually tailored welfare service that differs according to age: infancy, early childhood, adolescence, youth, middle age and, lastly, old age. For example, the government has expanded welfare services that provide child care subsidies to approximately 2.5 million children, and has expanded health insurance coverage for four major causes of death: cancer, heart disease, cerebrovascular disease and rare & intractable diseases. These welfare services are seen as having built a framework for a sound social security system across the nation.

The Park Geun-hye administration has also adopted its “Government 3.0” vision that allows wider public access to government data. This initiative refers to a government reform drive to boost transparency, information-sharing, communication and cooperation in the overall management of state affairs.

Through the Government 3.0 plan, the administration has switched its focus from “the nation” to “the people” in mapping and implementing its government policies, as well as broadened the disclosure of administrative information to the public.

As a result, Korea was ranked first in terms of open government data in the “Government at a Glance 2015” survey published in July 2015 by the Organization for Economic Co-operation and Development (OECD).