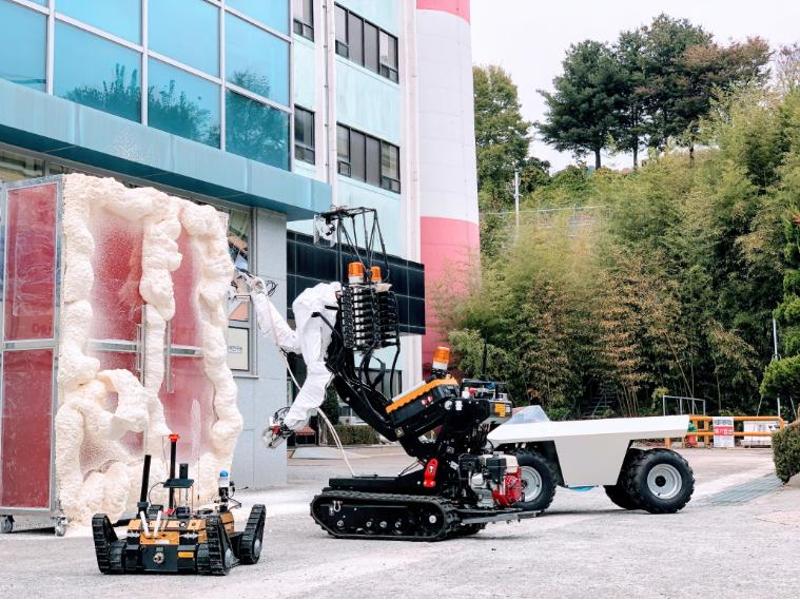 The Korea Atomic Energy Research Institute on Dec. 7 said it is developing an unmanned robot system for response to a nuclear disaster. The photo above is of the robot TRAM (Tracked Radiation Area Monitoring) on the left, which monitors indoors, and ARMstrong (Accident Response Manipulator) in the middle, which responds to a disaster. Both robots are shown shutting entry and exit points of the building in a simulated radiation leak. (Korea Atomic Energy Research Institute)

A domestic think tank has developed robots to respond to a nuclear disaster.
The Korea Atomic Energy Research Institute (KAERI) on Dec. 7 said it developed an unmanned robot system that responds to such a contingency.

Under the system, robots instead of human personnel are dispatched to the site of a nuclear disaster given the threat of a radiation leakage.

TRAM is a small armored vehicle about 30 cm tall that detects radiation and temperature. In real time, it creates a 3D map, outlines information such as the radiation level at the disaster site and thermal imaging, and transmits this data externally.

RAM, a drone that monitors radiation in midair, can fly 60kph and create a map of radiation contamination based on field observations of the site.

ARMstrong can carry cargo of up to 200 kg and freely travel on rough terrain. It can also transport concrete and waste drums, spray water to extinguish fires and handle debris.

Since 2016, KAERI has verified the efficiency of these robots in disaster simulations. In August this year, it sent TRAM inside a building to gather information about the situation there and in October, ARMstrong was dispatched to spray urethane foam that sealed off all entry and exit points of a radiation-leaking building.