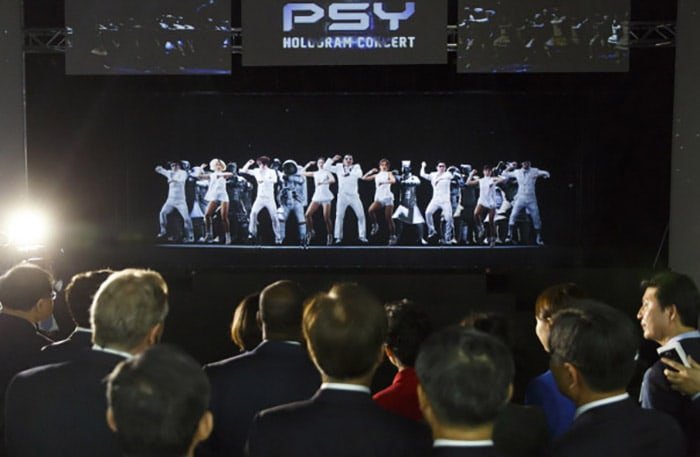 Korean experts and enterprises have invested heavily over the past four years in developing patent technologies in hologram, a field which has been dominated by overseas inventors. Pictured is a group of people watching a hologram of the ‘Gangnam Style’ music video by Psy.

Korea is now focusing on the development of hologram technologies which display a fully three-dimensional image of a subject by projecting light into the air.

Hologram takes advantage of holography, a photographic technique that records light scattered from an object and then presents it in a way that appears three-dimensional. In Korea, an advanced version of the hologram has begun to emerge, offering more than just a three-dimensional image, allowing people to touch and feel the image, as well.

On Dec. 29, the Korean Intellectual Property Office (KIPO) said that the number of patent applications for hologram technologies at home has reached 343 cases over the past four years since 2012, twice as many as the applications registered between 2008 and 2011.

Compared to the past where most hologram patents were filed dominantly out of Korea, many Korean companies have turned to the highly promising technology of the era by conducting research and development of holograms. In 2015, 96 out of the total 100 patent applications were filed by Korean individuals and firms.

Among the holographic technologies under patent, there is the “floating” display technology which projects holographic images onto a semi-transparent fabric, to make the images look like they are floating in mid-air. There’s also the traditional “holographic” display which utilizes light diffraction to create a virtual three-dimensional image of an object. The “plasma” display is a type of display that creates a three-dimensional image in mid-air using the laser plasma emission. Lastly, “haptic holograms” create invisible three-dimensional objects that can be touched and felt and, also, can interact with a real human being.

Samsung, too, obtained a patent for this kind of haptic hologram which allows the user to feel a ball-like holographic object mid-air when he tries to press the image down to make a dent in it. A sensor is attached to the body of the user, giving him or her a real feel of pressure and texture in the act of pressing the virtual ball.

“It’s safe to say that holography completes the three-dimensional imaging technology. It can be utilized in various ways across such industries as architecture, education, medical services and games and it has a great ripple effect across the industries,” said an official from the KIPO. “The government will continue to fund the expansion of the nation’s hologram industry, so as to tap into the future market of astronomical proportions. Further effort will be made in research and development among industries and academics, as well as in acquiring patents.