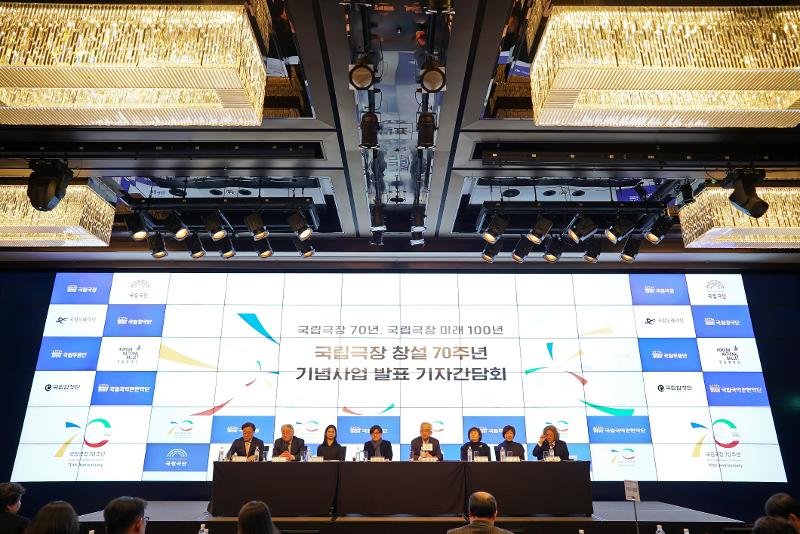 Art directors from the National Theater of Korea on Jan. 15 hold a news conference to announce programs to celebrate the theater’s 70th anniversary this year at JW Marriott Dongdaemun Square Seoul.

The National Theater of Korea will host performances and events to mark its 70th anniversary this year.

As the first national theater in Asia, the National Theater was established on April 29, 1950, at Bumingwan (now the Seoul Municipal Assembly Building) on Taepyeong-ro in central Seoul. Having suffered during the Korean War as well as undergoing relocation to Daegu and Seoul’s Myeongdong district, the theater is now located in the capital’s neighborhood of Jangchung-dong.

In a news conference on Jan. 15 at the hotel JW Marriott Dongdaemun Square Seoul, art directors from the theater announced the programs slated for this year to mark the theater’s 70th anniversary including a ceremony, performances and academic events.

Starting with “Orchestra Series III: Sijo Cantata” of the National Orchestra of Korea on March 26 at Lotte Concert Hall, the anniversary performances will involve seven national arts organizations and run through July at major concert halls in Seoul such as the National Theater, Myeongdong Theater, Sejong Center and the Lotte hall.

The performance will be the first time for the nation’s top five performing troupes to hold a joint session on one stage.

Additionally, the opera group will perform its new work “Red Pants” from March 27-28 at Daloreum and the dance troupe will premiere “Sanjo” from April 18-19 at Sejong Grand Theater of Sejong Center.

At Myeongdong Theater, the ballet and the chorus groups will each present a compilation of their most popular works, “Best Collection,” with the former to perform from May 8-9 and the latter from May 15-16. 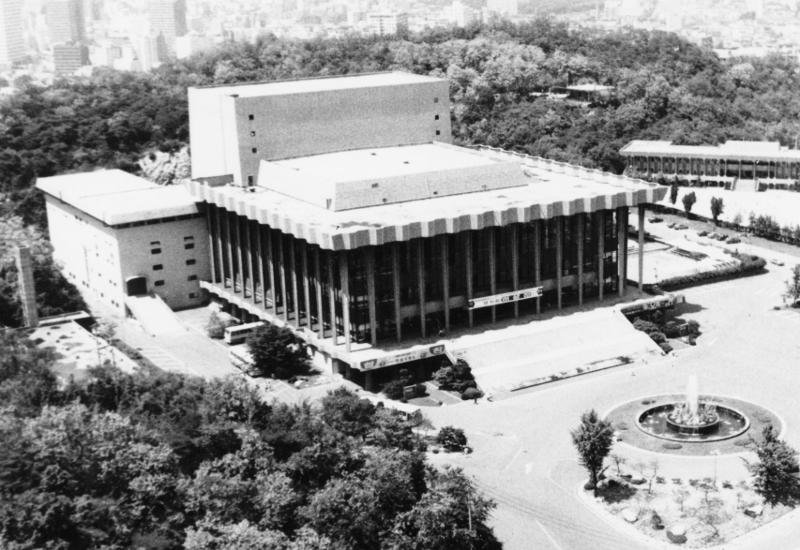 The National Theater of Korea, established on April 29, 1950, was first opened at Bumingwan (now the Seoul Municipal Assembly Building) on Taepyeong-ro in central Seoul. After several rounds of relocation, the facility in October 1973 found a permanent home in Seoul’s Jangchung-dong neighborhood. The photo above shows the theater on Oct. 17, 1973, in Jangchung-dong.

The National Theater on April 28 will also host an international symposium on its 70th anniversary at the Grand Ambassador Seoul Hotel. Participants will reflect on the theater’s meaning and status as the first national theater in Asia as well as look at its future role in the global performing arts industry.

In line with the trends of world performing arts, the theater is inviting foreign productions to perform there. “Players,” “Mao II” and “The Names,” three works that received attention at France’s Avignon Festival in 2018, will be staged at the theater from June 5-6.

The three plays, all based on novels by American writer Don DeLillom, will be performed consecutively for about nine hours.

More information on these programs and online ticket reservations are available on the National Theater’s homepage (http://www.ntok.go.kr), which is in Korean and English.