The opening ceremony for the Tongil Platform, or “Unification Platform”, was held at Dorasan Station on the Gyeongui Line on Oct. 14.

The Tongil Platform, or “Unification Platform,” was opened to the public at Dorasan Station, the northernmost station along the Gyeongui Line that connects Seoul to Sinuiju, on the banks of the Amnokgang River. At the commemorative platform, there’s a range of art work and memorials showing the people’s longing for Korean reunification.

There is the Unification Gate, Unification Time Wall that shows a clock counting how long Korea has been divided, the Wishing Wall and the Unification Exhibition Hall. German President Joachim Gauck, Minister of Unification Hong Yong-pyo, KORAIL President Choi Yeon-hye and other dignitaries participated in the platform’s commemoration ceremony on Oct. 14. 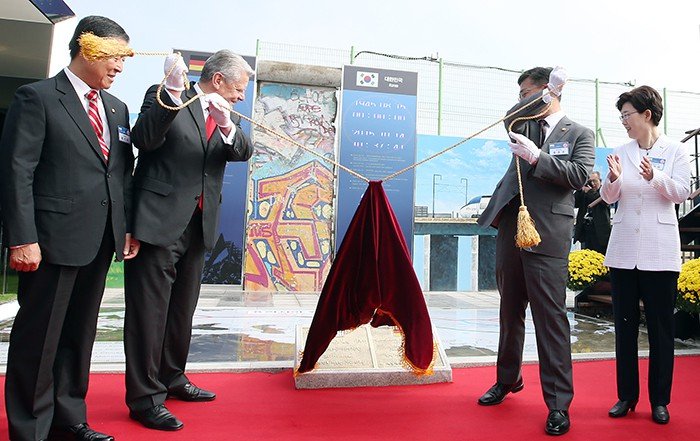 President Gauck passed through the Unification Gate engraved with wishes for Korean unification written in 11 languages. KORAIL President Choi Yeon-hye explained the platform’s map of all of Eurasia, highlighting the railway that could connect Korea to Berlin, as President Gauck looked on attentively. Gauck also inspected the Unification Time Wall, which represents the Berlin Wall, now a symbol of peace. It shows Germany’s time of division having stopped, but shows that the division of the Korean Peninsula continues onward. German President Joachim Gauck (third from right) says goodbye to participants at the Tongil Platform at Dorasan Station on Oct. 14.

Unification Minister Hong Yong-pyo said, “The most interesting thing was the postal train and the military caboose that ran between the two Germanys. During the Cold War, the train carrying letters allowed people to communicate with their families. That has important meaning for us.”

Finally, KORAIL President Choi Yeon-hye concluded by saying that, “President Gauck is a hero for unifying Germany. His visit to Korea, one of the only divided countries remaining in the world, will encourage the Korean people to be hopeful. I hope Korean unification will be realized as soon as possible, so as to make the South-North railway connect with the continental railway system.” German President Joachim Gauck (fourth from left) and other dignitaries pose for the camera during the ribbon cutting ceremony at the Tongil Platform on Oct. 14. 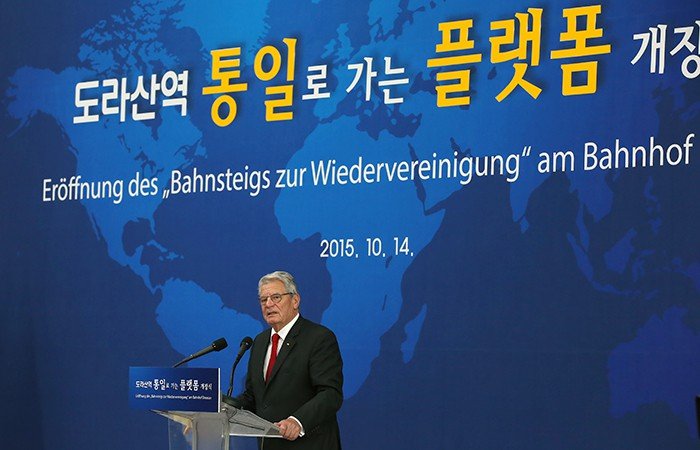 President Gauck commemorates the opening of the Tongil Platform and gives a speech in support of Korean unification and about the pain of division. German President Joachim Gauck and other dignitaries passed by DMZ Train for its opening ceremony on Oct. 14.