On the last day of the year, beaches on the eastern coast of the country are crowded with visitors who want to see the first sunrise of the coming year earlier than they could in other, more inland places. There are, however, plenty of other options for beautiful places to see the sunrise besides along the eastern coast.

The list focuses on places that don’t have steep climbs and are relatively easy to get to for visitors, so KNPS does not include some of the most popular and highest peaks in the national parks, such as Cheonwangbong Peak in Jirisan National Park, Daecheonbong Peak in Seoraksan National Park and Baekundae Peak in Bukhansan National Park. 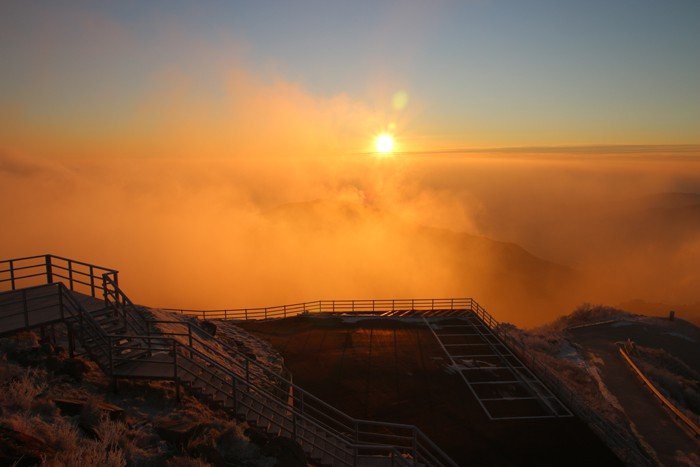 A sunrise seen from the 2nd Yeonhwabong Shelter in Sobaeksan National Park.

The way to Nogodan Peak in Jirisan National Park is about one and a half hour walk (about 3.4 kilometer distance) from Seongsamjae Pass. The gentle slope makes access to the peak easier for family visitors. The peak is famous for its sea of clouds, which is often named as one of the ten best sceneries in the park.

The 2nd Yeonhwabong Shelter in Sobaeksan National Park, located at 1,357 meters above the sea level, has not been known as the best place to enjoy sunrise until now. Located also on a gentle slope, the shelter is only 5.2 kilometers away from the Juknyeong Visitor Information Center at the entry, which is accessible in 2 hours hiking distance. An observatory enables hikers to enjoy the view of the entire Baekdudaegan mountain range. Access to the shelter is limited and requires reservation at the KNSP’s online reservation system at reservatioin.knps.or.kr.

Gureum Observatory on Dulle-gil in Bukhansan National Park is one of the most popular tourist destinations, located within the Seoul Metropolitan area. The observatory lies in the middle between Hwagyesa Temple and Bballaegol Valley, each of which is located at each end of the Dulle-gil trail, and it only takes about 15 minutes on foot to get to the observatory from either place. Visitors who want to enjoy the view need to get there early since the premise is not big enough, the KNPS recommends. 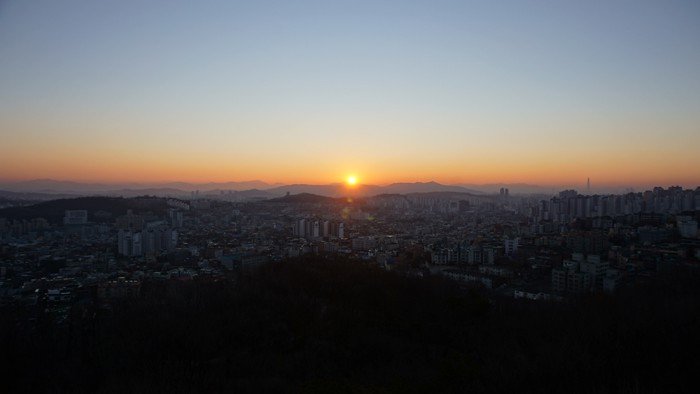 Nogodan Peak in Jirisan National (top) and the sunrise seen from the observatory in Bukhansan National Park (bottom).

KNPS has also provided some tips for hiking in winter time. Some hikers hurry to arrive their destinations before the sun rises and sweat a lot. When cooling the sweat down, their bodies often lose too much heat and fail to keep the body temperature, but keeping the body warm is one of the most important. Taking less challenging courses, as well as experienced hikers, is recommended for non-frequent hikers. Lastly, hikers need to prepare for warm clothes, hats and blankets to stay a few hours outdoors while drinking hot water and eating high-caloric chocolates and candies for keeping them warm.

If a hiker shivers or gets drowsy, companies or anyone around should call for help at 119 for medical emergency or the nearest National Park office. Hikers can keep them updated with the latest weather forecasts before packing their backpack, in case where the access to their destination is limited due to severe weather events, such as heavy snow.