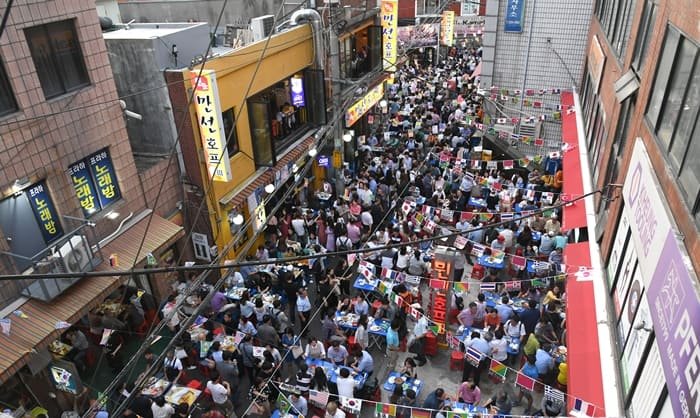 In Seoul, there’s a place called the Euljiro Nogari Alley, tucked away behind exit 4 of Eulji-ro 3-ga Station, where people can enjoy draft beer with a side of nogari dried pollack. (Junggu District)

By Kang Gahui and Lee Hana

During the day, the streets surrounding Euljiro 3-ga Station on Seoul’s subway lines No. 2 and No. 3 are littered with tools and parts laid out by the local hardware stores. The streets whir with the sound of machinery and small workshops.

After hours, however, this busy street transforms itself into the Eulji-ro Nogari Alley, a place for drinking draft beer accompanied by nogari dried pollack.

Once known as the Printer’s Alley, this strip of urban asphalt started taking shape in the 1980s between the Eulji-ro 13-gil and Chungmu-ro 11-gil streets. Following the 1997 Asian financial crisis, the area became a place where laborers from the nearby subway stations and printing factories would drink away their sorrows at the end of the day. Nowadays, the alley has become a watering hole for salary men from nearby office buildings.

Currently there are around 17 pubs and beer joints along the Nogari Alley. Among them is Eulji OB Bear, the oldest of them all, with a 38-year history. Its owner is Choi Suyoung, who took over the 5-pyeong/ 16.5-square meter shop from his father-in-law, who opened it back in 1980.

“Initially, the pubs here served beer and nogari to workers from nearby printing factories who would come to relax after their overnight shifts. These days, we see all types of customers here, from office workers in business suits, to kids in their 20s and 30s, and even people from other countries,” said Choi.

Funnily enough, the pubs here didn’t serve nogari as a side from the start.

“During the Chun Doo-hwan administration in the 1980s, the liquor license laws changed so that we were no longer permitted to also sell side dishes. After much deliberation, my father-in-law decided to put nogari on the table,” explained Choi. Back in 1980, one dried pollack cost KRW 100 and a glass of draft beer cost KRW 380.

You can easily get your hands on some cold draft beer and dried pollack at Seoul’s Euljiro Nogari Alley. (Seoul Mirae Yusan)

Once customers secure a table, they are served a round of draft beer and nogari, without needing to place an order. Even today, the dried pollack, grilled over an open flame, costs a mere KRW 1,000 and the beer costs KRW 3,500. The secret to the Nogari Alley’s success lies in its cheap eats and the spicy gochujang dipping sauce that adds a zing to the pollack.

The Nogari Alley’s outdoor table setting, laid out along the narrow alley, was, until recently, against the law. During the global financial crisis of 2007-2008, when the alley’s pubs lost many of their customers and competition became fiercer, the owners came together and formed the Eulji-ro Nogari Pub Co-op and sent a formal request to the Jung-gu District office to legalize their outdoor business.

In May 2017, the owners finally received a permit to run their outdoor business after paying a fee for the exclusive use of the road. This new arrangement allows them to legitimately open their pubs from 7 p.m. to 11 p.m.

Chung Gyu Ho, head of the Eulji-ro Nogari Pub Co-op, said, “With more customers in the Nogari Alley, the area has become more commercialized. What I want to see is for our regular customers from the 1980s to visit our strip with their sons and grandsons. I hope the festivals hosted on Eulji-ro Nogari Alley, now in its fourth year running, will eventually become a Korean version of Oktoberfest.”