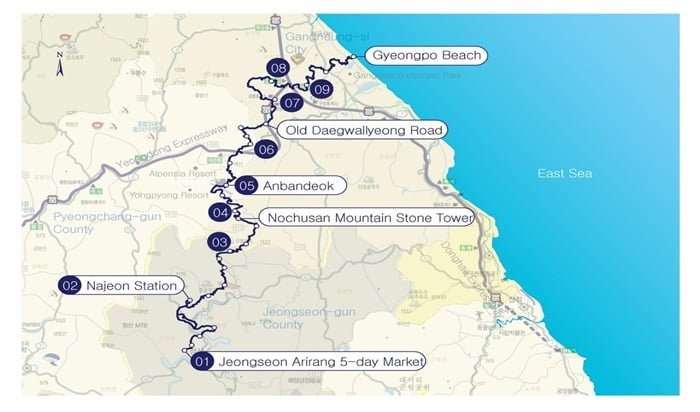 Stretching all across Gangwon-do Province, there’s a special network of walking paths called the Olympic Aribaugil. It connects all three host cities of the 2018 Winter Olympics — Pyeongchang, Jeongseon and Gangneung — and is composed of nine separate walking or hiking routes.

Stretching all across Gangwon-do Province, there’s a special network of walking paths called the Olympic Aribaugil network of hiking trails, where travelers can enjoy the great outdoors and the beautiful trees and mountains that exist in the region.

The Olympic Aribaugil network of hiking trails is a great natural treasure, where one can experience the pleasures of slow travel while enjoying the views of the mountains and seas of Korea.

The hiking trail network is a series of trekking courses that connect the three host cities of next year’s PyeongChang 2018 Olympic and Paralympic Winter Games: Gangneung-si, Pyeongchang-gun and Jeongseon-gun, all in Korea’s beautiful Gangwon-do Province.

The name “Olympic Aribaugil” is a combination of the words “Olympic,” “ari-” from the famous version of the folk song “Arirang” from the town of Jeongseon, and “-baugil” that refers to the Gangneung Bau-gil Road, a 150-km walking trail along the mountain ridges and coastlines of Gangneung City.

This network of hiking trails takes thru-hikers and tourists alike to attractions across all three cities. It begins from Jeongseon County in the mountainous Daegwallyeong region and winds its way to Gyeongpo Beach in Gangneung.

If you want to learn more about traditional Korean food and heritage, course No. 1. is recommended. This course starts at the Jeongseon Arirang 5-day Market, a popular traditional market in Gangwon-do. There, you can find delicious local specialties from the province. In winter, you can also enjoy special dishes like hot-and-spicy freshwater fish stew, buckwheat crepes, and alcoholic beverages made from corn. The longest section of the network is course No. 2. This 20.5-km section includes the “Aura” region. This area has been transformed into a leisure and sports venue after the railway was closed and the old railway tracks were converted into a hiking trail.

Riding a rail bike along sections of the old tracks in the snow-covered mountains will offer you the chance to relish the peaceful and tranquil atmosphere of a rural Korean village.

The third section of the trail network passes by the Nochusan Mountain Stone Tower. You can find about 3,000 stone pagodas there, of various sizes and shapes. These pagodas were all erected by one elderly woman who worked there until she passed away, in a heartfelt wish for good health and happiness for her family. If you walk along the 1-km section, you’ll feel the deep love and respect that the old woman had for her family.

The fourth section of the trail network goes up 1,000 m to the Anbeondeok, a mysterious place often shrouded in deep fog. Although it’s not an easy approach, due to heavy snow in the winter, the spot gives you a unique view of the large farms below, covered in snow.

For those who love to fully enjoy trekking and hiking, courses No.s 5, 6, 7 and 8 will show you the beautiful natural scenery of the Baekdudaegan mountain range.

Among those four courses, No. 6 goes along the Old Daegwallyeong Road, which goes through both Yeongdong and Yeongseo.

This road became a desolate mountain path after the freeway was built, but you can still enjoy some hiking and some stunning mountain views here.

Despite its altitude, hikers will be able to climb a relatively flat section where they will enjoy the beautiful views decorated with snowflakes, the true charm of winter trekking.

After climbing the mountain, the trail leads you to the final section that heads downward toward the coast of the East Sea.

When you arrive at the Gyeongpo Beach with its pine tree and sea breeze, you’ll be right there at Gyeongpo Lake.

A night, Gyeongpo Lake is decorated with lights and the spot where the lake meets the sea offers an extraordinary experience. Also at night, you can see the moon at three sites: in the sky, in the sea and in the lake. The three moon reflections provide enough light to make the lakeshore perfect for a night stroll.

The entire Olympic Aribaugil hiking network is 131.7 km. Among the nine courses, course No. 2 is the longest. The toughest is No. 3, as hikers have to climb up Nochusan Mountain. The average length of each section is about 14.6 km.

It takes about three or four hours for an adult hiker to finish each section.