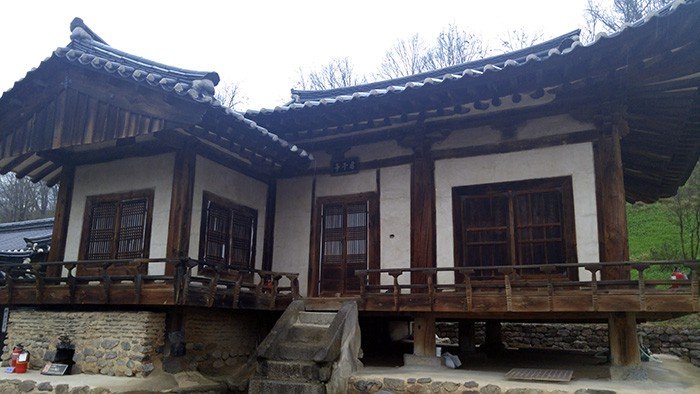 Andong-si City in Gyeongsangbuk-do Province has been celebrated as the Town of the Yangban, or families of noble birth, ever since Joseon times. To this day, there are dozens of head households belonging to age-old family clans clustered in the city, retaining their former glory and upholding the traditions of their forefathers.

Some of these houses, in fact, now offer “Hanok stay” bed-and-breakfast services that allow visitors to spend a night or two in a heritage building and to experience the living spaces that were once occupied by our ancestors.

Imcheonggak (임청각, 臨淸閣) is one such home, the head household of the Goseong Yi clan (고성 이씨, 固城 李氏). Located in central Andong, Imcheonggak has been the Goseong Yi family’s bedrock for at least 500 years. As one of the largest private Hanok residences in the country, it stands at 99 kan in size, the uppermost limit that was granted to private citizens during the Joseon era.

The story goes that Yi Won (이원, 李原) (1368-1430), who served as first vice-premier during the reign of King Sejong (r. 1418-1450), had a son named Yi Jeung (이증, 李增) who gave up his public post and retired to the country. In Andong, he was captivated by the beauty of a riverside plot and decided to set up a base there. Thereafter, Yi Jeung’s third son, Yi Myeong (이명, 李洺), constructed the residence in 1519 during the 14th year of the reign of King Jungjong (r. 1506-1544). So the jongtaek, the head of household, of the Goseong Yi family came to be established in the heart of Andong. The main living quarters of Imcheonggak are built along the natural inclination of the foothills of Yeongnamsan Mountain to help maximize day light. Looking out from the window of the Gunjajeong, a detached pavilion, one can see the adjacent pond and Imcheonggak’ssadang, or ancestral shrine, up on the hill.

Imcheonggak is situated on a traditionally propitious site according to the geomantic theory of baesan-imsu (배산임수, 背山臨水). The house has the magnificent Yeongnamsan Mountain to its rear, with the Nakdonggang River flowing leisurely in the foreground. Across East Asia, this combination is thought to be a good topographical location for a residence.

The mansion uses the natural landscape of the mountain to its advantage, arranging the main living quarters, like the an-che (안채), the jung-che (중채), and the sarang-che (사랑채), in terraced blocks along the foothills of Yeongnamsan Mountain. There are five differently-shaped yards connecting the living quarters, increasing the usability of these spaces.

As you enter the premise from the main gate, there is a row of household management buildings called thejeongchim (정침) to the left. On the far right, up on a hill past a stone wall, you catch a glimpse of the Gunjajeong (군자정, 君子亭), a detached pavilion. Right next to this pavilion is a square-shaped pond, and next to this pond is the Yi clan’s sadang, or ancestral shrine, at the top of the hill.

The name Imcheonggak was derived from the Chinese poem “Returning Home” (귀거래사, 歸去來辭) by poet Tao Yuanming who lived in the middle of the Six Dynasties period (220-589). In one part of the verse, it reads:

Climb the eastern plateaus and let out a long whistle (登東皐以舒嘯)
Sit beside clear streams and compose poetry. (臨淸流而賦詩)

From the second line of the verse, the character “臨” (임, im), meaning “to engage,” and “淸” (청, cheong) meaning “pure and clear,” were used to create the name Imcheong. The gak added to the end means “house.” The signboard for the house was written by the great Confucian scholar Toegye Yi Hwang (퇴계이황, 退溪 李滉). Just like its poetic name, Imcheonggak was a place with a taste for the arts and during Joseon, the house was frequented by many renowned poets and scholars of the age. 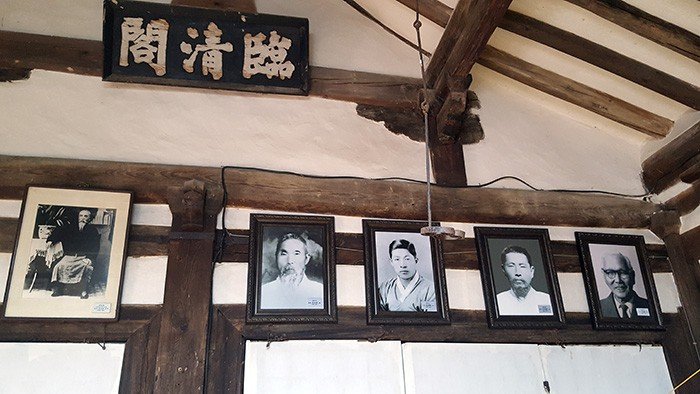 Inside Imcheonggak’s Gunjajeong pavilion, you can see a replica of the signboard written by Toegye Yi Hwang (퇴계이황, 退溪 李滉) as well as photos of Goseong Yi family members that partook in the Korean independence movement during the early 1900s.

The Goseong Yi family thus established the foundation for their head household, and maintained its status as an honorable and noble household for many generations. Everything changed however, with the start of the Japanese colonial era in 1910. Suddenly, Imcheonggak was no longer just a yangban residence. It was transformed into a scene of what would be a long and arduous independence movement.

As Korea lost its independence, the surviving male heir to the Goseong Yi family, Yi Sang-ryong (이상룡, 李相龍) (1858-1932), took down all of his family’s ancestral tablets from Imcheonggak’s ancestral shrine and buried them in the ground. He then sold all his family fortune and traveled to Manchuria and devoted the rest of his life to the liberation movement. Yi Sang-ryong served as the third president of the Provisional Government of the Republic of Korea in Manchuria. His son and grandsons, over four generations, actively participated in the independence movement.

Today, Imcheonggak is an embodiment of the Goseong Yi clan’s legacy. Photos, medals of honor and other reference materials occupy the walls of the Gunjajeong pavilion, reminding us that the spirit of independence is still alive on the grounds where Imcheonggak stands. Nearby, the ancestral shrine sits atop the hill, overlooking the Nakdonggang River. Yi Sang-ryong apparently desecrated the family’s ancestral tablets, saying that, “Before our country’s autonomy is regained, family legacy has no meaning.”

Before Japanese colonization, the main gate of Imcheonggak opened out onto the riverbed of the Nakdonggang River. Sitting on the ledge of the wooden floor under the giwa tile awning, the historical site leads one to question the meaning of words like legacy, honor, and what being a seonbi, a classical scholar, signifies in its truest sense.

One thing is for certain, though. Here, on the site where Imcheonggak has stood for nearly 500 years, a family’s legacy and the undying flame of a historic independence movement live on still.

More information about Imcheonggak and reservations can be found at the link below:
http://www.imcheonggak.com/ Nine liberation activists who were awarded the Order of Merit for National Foundation were born in Imcheonggak and its front gate stands today.